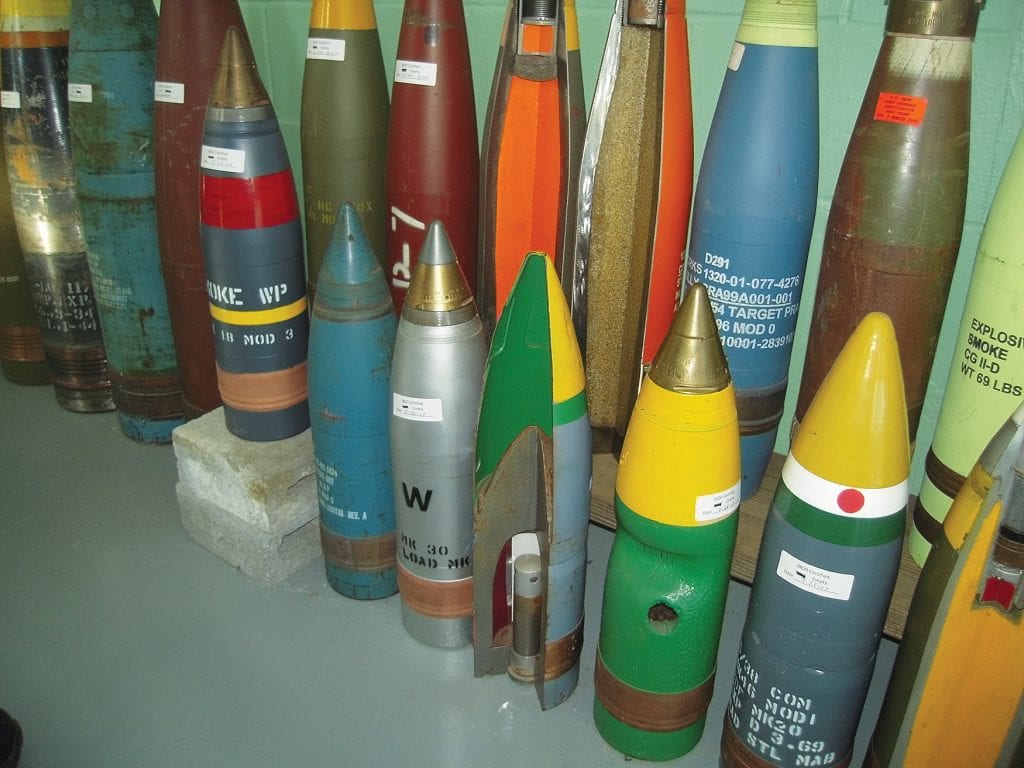 The recently opened Jefferson Barracks Ordnance Depot museum is a virtual treasure trove of military weaponry from the early 1900s through today.
The brainchild of retired Navy Cmdr. Mike Brueckmann of Oakville, the museum at 94 Worth Road officially opened last November and houses ordnance from all branches of the military — powder canisters, grenades, shells, missiles, torpedoes and bombs.
The 501(c)(3) tax-exempt museum leases the building, which at one time housed the Jefferson Barracks Football Club, from St. Louis County.
The museum features items Brueckmann has collected over the past 20 or so years.
Asked what prompted him to open the museum, he said, “I had all this stuff in my basement, and my wife was yelling at me to clean up the basement and clean up the garage. A friend of mine had a warehouse space and once we got the warehouse space, ‘Well, hey, we’ve got all this space to fill,’ so we’ve still got more stuff sitting out in Arnold, but this is the big stuff (in the museum).”

Asked where he obtained all the pieces, Brueckmann said, “Everywhere … some shows, but the word gets out that I’m collecting, and I’ve actually walked out of the house in the morning and there’s something sitting out on the lawn that showed up in the middle of the night …”
He spent four years on active duty in the Navy and 35 years in the reserve.
“Then I got to do a lot of traveling that I wouldn’t normally with the Navy because I worked for the Seabees and I’d go around and inspect buildings in different towns and stuff like that and find stuff like this.
“‘What are you guys going to do with that? You’re not going to throw it in the junk pile? Hold everything — ship it to this address,’” he recalled.
During a recent tour of the museum, Brueckmann highlighted various pieces on display and the history behind them.
Regarding a star shell, he said, “They shoot that over the target and it pops open because it’s a time fuse and a flare comes out on a little parachute and it backlights the target … It illuminates the back side of the ship so they can sit out here and see the ship. Unfortunately, those guys are shooting the same thing back at them, so it’s a toss-up.”
Brueckmann also is knowledgeable about the various types of explosives in the weaponry and their effectiveness.
Of an anti-tank shell, he said, “It’s very light casing. It’s full of plastic explosive, and when that hits the tank or the other armored vehicle, it just squashes and it spreads that plastic explosive all over the outside. Then it goes off and a shock wave goes through the armor and takes the inside of the armor and just peels it open.
“So you’re sitting in a bathtub that you just teed off a golf ball in …”
While many of the pieces on display come from throughout the country, one of the torpedoes on display has a St. Louis connection, as half of it was made here.
“Half of this was built in St. Louis, down at Kingshighway and Arsenal, down at the old American Can Co., and the other half was built in Forest Park, Ill.,” Brueckmann noted.
Amertorp Corp., 3200 S. Kingshighway St., began manufacturing torpedoes for the Navy during World War II.
Amertorp, operated by the American Can Co., was the first private concern to make torpedoes for the Navy and was the biggest single naval torpedo plant in the country.
Brueckmann also recounted how he purchased a depth charge now on display in the museum during a visit to an antique store in Flat River.
“… It had a sheet of glass on it. Somebody was using it for a coffee table,” he recalled, saying he purchased it on the spot for $50.
After loading it into his trunk, the storekeeper chased after him, “Wait a minute. Wait a minute. You forgot your glass.”
Brueckmann replied, “I don’t want the glass,” as the storekeeper told him the glass was needed for the “little coffee table.”
Needless to say, the glass remained at the antique store.
Visitors can check out the depth charge and just about every conceivable type of weaponry at the Jefferson Barracks Ordnance Depot.