New development brings Fitz’s, The Shack and 110 jobs to a vacant site 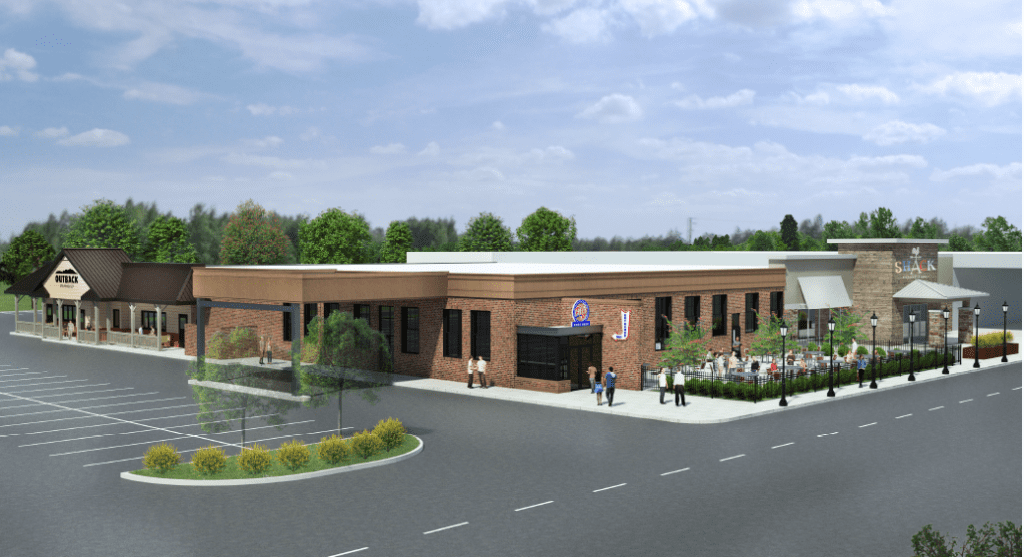 One of the largest developments south county has seen in years will bring Fitz’s Root Beer and The Shack to a long-vacant site on South Lindbergh Boulevard near Ronnie’s Cinema.

Construction is set to start in early July for the “Gathering Square” development, which could open by the end of the year.

The site, at 5228-5240 S. Lindbergh Blvd., will be the second location of Fitz’s, a mainstay of University City’s Delmar Loop, and the sixth location of The Shack breakfast and brunch restaurant.

The restaurants signed leases last week to occupy the other side of the same building as Outback Steakhouse, which will remain.

In the same plaza, Christ Memorial Lutheran Church and America’s Incredible Pizza are separately owned and will also stay open at the site of the former Target store.

Arnold resident and developer Daniel Jones said he used to drive by and wonder why the site had been vacant for so long — at least eight years.

“South Lindbergh is South Lindbergh, it’s got 30,000 vehicles a day past this location,” he said. “I kept looking at it driving by and thinking why is that vacant?”

He found out once he bought the property that the fact that Target had split the property when selling it complicated development efforts because all the owners had to grant approval for any changes.

Now he owns the property and plans to keep it as a treasured heirloom of sorts for his children. It’s an extension of his work in south county through the bank the family owns, Fortune Bank, which has locations in Oakville and Arnold.

After buying the land, he initially applied for rezoning last year to build a Freddy’s Steakburgers fast-food restaurant on the outlot of the parking lot next to Outback, but dropped those plans when Fitz’s came through. Fitz’s and The Shack had been searching for property in south county for years. And although he missed out on Freddy’s, he hopes that it can find another location in south county for its first St. Louis location.

“I’m not sure that there’s been another development cumulatively like this as far as eating establishments in south county in years,” Jones said.

The development could bring 110 to 120 full-time equivalent jobs and $5 million to $7 million in new revenue beyond what Outback Steakhouse already brings in. That doesn’t include the outlot, which can still be developed. Once that project is finished, the site could house 150 to 175 new jobs.

The inspiration for the name came from Jones’ wife as the family was dining out.

“I like to involve our family in developments like this, we enjoy being together,” Jones said. “My wife came up with ‘Gathering.’ Today society’s so busy. Everybody’s on their phones instead of looking at each other. They’re looking down while talking. What happened to old-fashioned family values where you put your technology down and you talk to each other and you forget about what’s going on elsewhere?”

The “Gathering” theme also extends to Christ Memorial Lutheran, which is based on the same idea of bringing people together, Jones said.

“We would call it a gathering square where people can gather to worship and go from the patio of The Shack to the patio of Fitz’s,” he said. “It’s just a place for people to spend time with each other. You can gather around a table or in a church. It brings some old-fashioned values back.”

Both restaurants will have high-end patios where residents will want to sit outside and enjoy each other’s company, he said. Since the current site is mostly asphalt and concrete, he will add landscaping, planters and lights to make it more welcoming.

The new 9,000-square-foot Fitz’s south county location will feature a full-service bar and a second dairy bar for shakes and floats. It will seat 220 people inside with space for an additional 40 on the outdoor patio.

Fitz’s Root Beer was created in St. Louis in 1947, and opened its first restaurant in the Delmar Loop in 1993.

“We’ve been looking for a location for quite some time and we’re excited to be part of the Gathering Square development,” Fitz’s owner Michael Alter said in a news release. “We’ve worked with Spiegelglass Construction on projects before, and are looking forward to their help with this expansion.”

“Fitz’s is a well-known establishment in St. Louis for a good reason,” said Barry Spiegelglass, co-owner of Spiegelglass Construction Company. “Our family frequents the current location for their famous floats and turkey burgers, and we’re thrilled to be working with Michael once again on his new space.”