New boundaries for 2017-2018 approved by Lindbergh board

Boundaries will be effective for the 2017-'18 school year 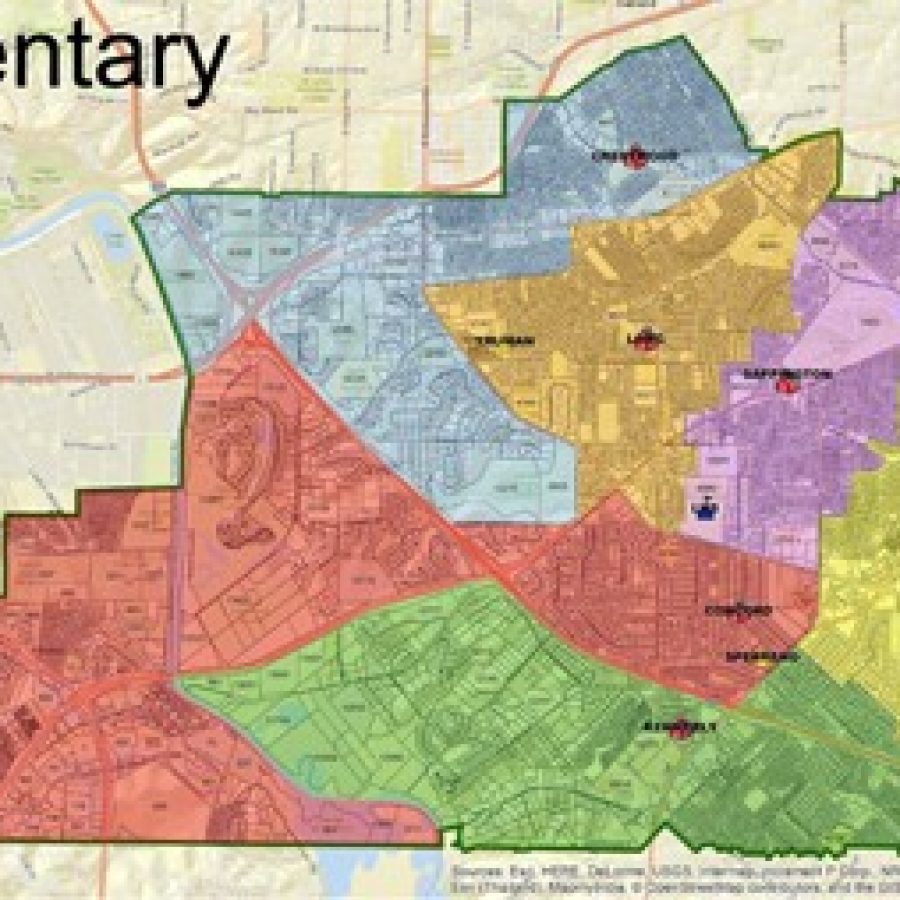 These new elementary-school boundaries will go into effect for the 2017-2018 school year.

The Lindbergh Board of Education voted unanimously last week to approve new elementary-school and middle-school boundaries for the coming school year.

The redistricting was necessary because of the district’s aggressive enrollment growth and in preparation for the opening of Dressel Elementary School in the fall. Construction of the new elementary school, which will have a capacity of 650 students, began in October 2015.

The boundaries were recommended to the school board by the district’s 19-member Boundary Committee, which was comprised of parents, community members and administrators.

The panel met four times to finalize its recommendation, which was presented to the Board of Education during a March 9 work session. Chief Financial Officer Charles Triplett headed the committee. Assisting the panel were Director of Technology Mariano Marin-Gomez and Sandy Woodfin of the Department of Technology, who drafted four boundary templates for the panel to begin its discussions.

Committee member Sean Saunders, a Crestwood Elementary parent, said, “… So we started this process and it was kind of nerve-racking at first. We really didn’t know where we were going to start … So it was kind of daunting. We were able to go in — they brought us four potential starting scenarios, which was really important. Each one had its own characteristics …”

By the end of the second meeting, the committee selected the third scenario, which was designed to balance elementary school enrollment numbers and minimize future overcrowding.

“We ended up coining the phrase ‘tweakablity’ because we felt that that had the most tweakability to it,” Saunders said.

After that meeting, the scenario was published to obtain community feedback, “which we got a lot of,” he said, adding that feedback was discussed at the panel’s third meeting, along with three variations of that third scenario.

“… At that point, based on community feedback and just what we thought of as a committee, we selected (Scenario) 3.2, which is what you’ll end up seeing tonight,” Saunders said.

Those numbers reflect the movement of existing students and do not include incoming kindergarten students.

Concord will start at 100-percent capacity because so many current students will still attend. Crestwood will start at 87 percent, Dressel at 94 percent and Kennerly, Long and Sappington at 90 percent or 91 percent.

By the 2020-2021 school year, all six elementaries are projected to exceed capacity:

In response to residents’ comments that were submitted, the Boundary Committee recommended:

 All of Fenton will stay together at Concord Elementary.

 The Hadley Hill neighborhood of Sunset Hills will continue to go to Concord.

 The Tealridge subdivision in unincorporated St. Louis County will go to Long, where it is within walking distance.

 All homes in the so-called “Crestwood sliver” north of Watson Road will attend Crestwood Elementary.

Under the new middle-school boundaries, Sperreng Middle will gain 78 students overall, including 214 from Truman Middle, and lose 136 students to Truman.

The committee also recommended a middle-school template that evenly divides the district’s six elementaries between the two middle schools.

Concord, Dressel and Kennerly will go to Sperreng, while Crestwood, Long and Sappington will go to Truman.

The main request parents made to the Boundary Committee in relation to redistricting at the middle-school level is that the district establish feeder patterns so that all students from each elementary school go to the same middle school. As it currently stands, Concord is split between the middle schools, with the western half going to Truman and the eastern half attending Sperreng.

Committee member Erica Hoffman, a Sperreng Middle School parent, told the school board, “… One of the things that we discussed was how important we thought it was to keep all of the elementary school fifth-grade classes together. And as a former Concord parent, my son Miles  ended up at Sperreng and only about 20 students out of a 120 from Concord went to Sperreng and the rest ended up at Truman.

“So we didn’t have a lot of friendly faces when he started at Sperreng this year. So I knew what it was like — the hardship that some of the kids have when the school is split up. So that was one of the things that the committee felt pretty strongly about, was to keep the kids together and not have to split them up again …”