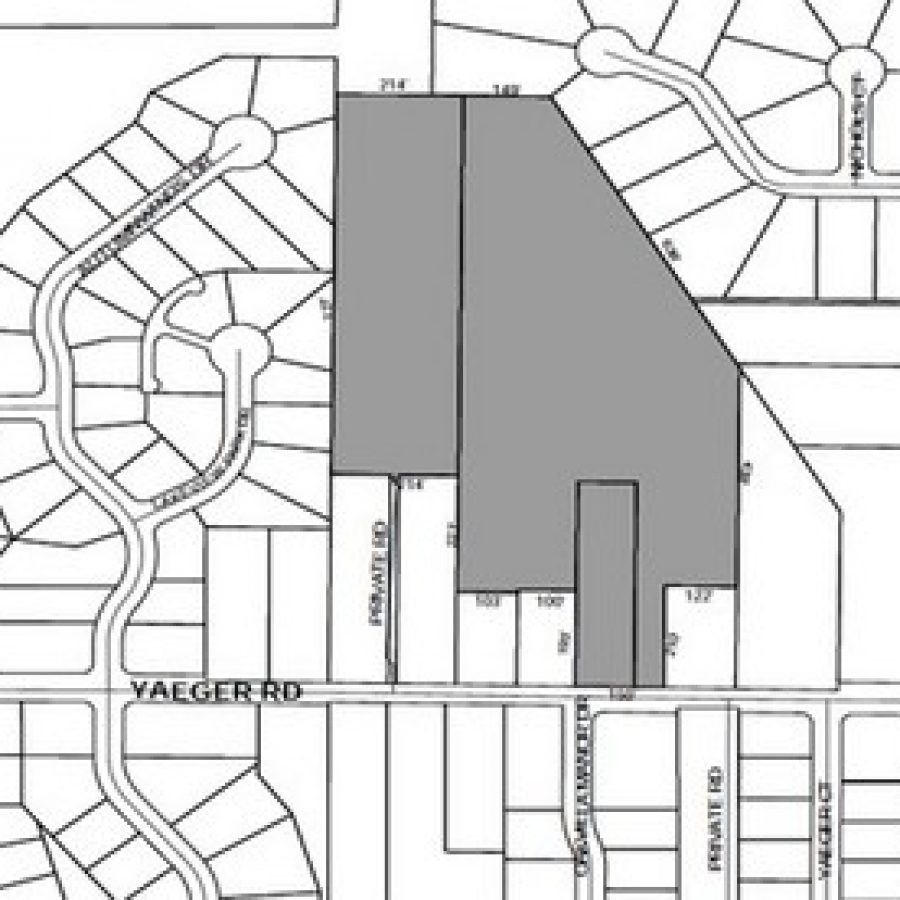 Above, a view of the Basler Tree Farm property, as outlined in county zoning documents. (

Neighbors are still fighting a proposed new subdivision next to Oakville Elementary School, but the County Council could approve the project as soon as next week.

If the council voted to perfect the proposal Tuesday — after the Call went to press — Pinnacle Development’s plan to build a 41-home subdivision, Grey Oaks Estates, on the current site of Basler Nursery & Tree Farm, could gain final approval when the council meets Tuesday, March 22.

In a twist from the typical way county legislation is introduced, the subdivision was not introduced by the councilman for Oakville, 6th District Councilman Kevin O’Leary, D-Oakville, but by his fellow members of the Public Improvements Committee, or PIC, a council subcommittee that offers a last chance to reconsider projects the Planning Commission sends to the council.

In November, the county Planning Com-mission — which includes three members from Oakville — unanimously recommended approval of Pinnacle Land Development’s plan to build Grey Oaks on 13.4 acres, including the Basler Tree Farm property and an adjoining site that currently has older houses on it. As proposed, lots would range in size from 6,000 square feet to 14,000 square feet, and houses would be single-story, one-and-a-half-story or two-story and sell for roughly $350,000. Residents would enter the subdivision through a single entrance off Yaeger Road.

The Basler family is ready to retire after operating the property, at 2953 Yaeger Road, as a tree farm since 1965 and as a nursery since 1985. Since the property is in the middle of a residential neighborhood, their only option and the “highest and best use” of the site is Grey Oaks Estates, Pinnacle representative Dan Peters said at a Feb. 2 PIC public hearing.

Two single-family houses are between the proposed subdivision and Oakville Elementary, but neighbors have cited the school as a key reason county officials should block the subdivision, noting traffic and safety concerns. The 112-foot cell tower that the subdivision will have to be built around compounds the project’s problems, neighbors contend.

After the PIC vote, O’Leary told the Call he wanted to take a stand with the Oakville residents, but he won’t necessarily stand in the way of the project’s approval, either.

“I just felt like I think it’s a good project, but to me it was more important about sticking up for the constituents, to know I’m on your side,” he said. “To me, that was the most important thing. It’s not that it’s a horrible thing, it’s going to be a good thing. I think 10 months after it’s done, they’re going to love it — but I’m just tired of some of the folks not getting heard and (county officials) not paying attention to what they’re saying.”

Some residents in Oakville still sting from the council’s 2013 approval of the National Church Residences Telegraph Road senior-housing complex at 6050 Telegraph Road despite strong opposition to the project.

Those feelings have carried over to the proposals for other developments, including Grey Oaks Estates, whose prospective neighbors have formed an opposition group, Concerned Oakville Residents Engaged, or CORE.

Roughly 40 residents and members of CORE came to the PIC’s public hearing last month and told O’Leary, Dolan, Page and Harder that they oppose Grey Oaks for many reasons, including how the houses will surround the cell tower. Although county officials cite other subdivisions built with a cell tower on the edges, CORE founder Jim Hamilton said none have been built with a cell tower in the middle.

CORE also believes the subdivision violates the terms of the existing conditional-use permit, or CUP, that governs the tower, which the Baslers will still own even after the property is sold.

When the Planning Commission initially granted approval in 1983 to the Baslers for the cell tower — then used for car phones — officials included a condition that the nursery trees provide a buffer between the tower and nearby residents and noted that they approved the tower because it was a low-intensity use generating minimal traffic.

At the PIC vote, Dolan said he understands that changes to neighbors’ longtime surroundings can be difficult to accept.

“But the bottom line is that the developer’s done everything they were required to do, and it’s just unfortunate — I understand that people don’t like to see (development) if they have a nice, quiet area,” Dolan said. “But when the other subdivisions were built, they didn’t want that in there, either, but it’s part of the process. And as long as they’ve got everything required by the P&Z, I personally don’t find a reason to deny this.”