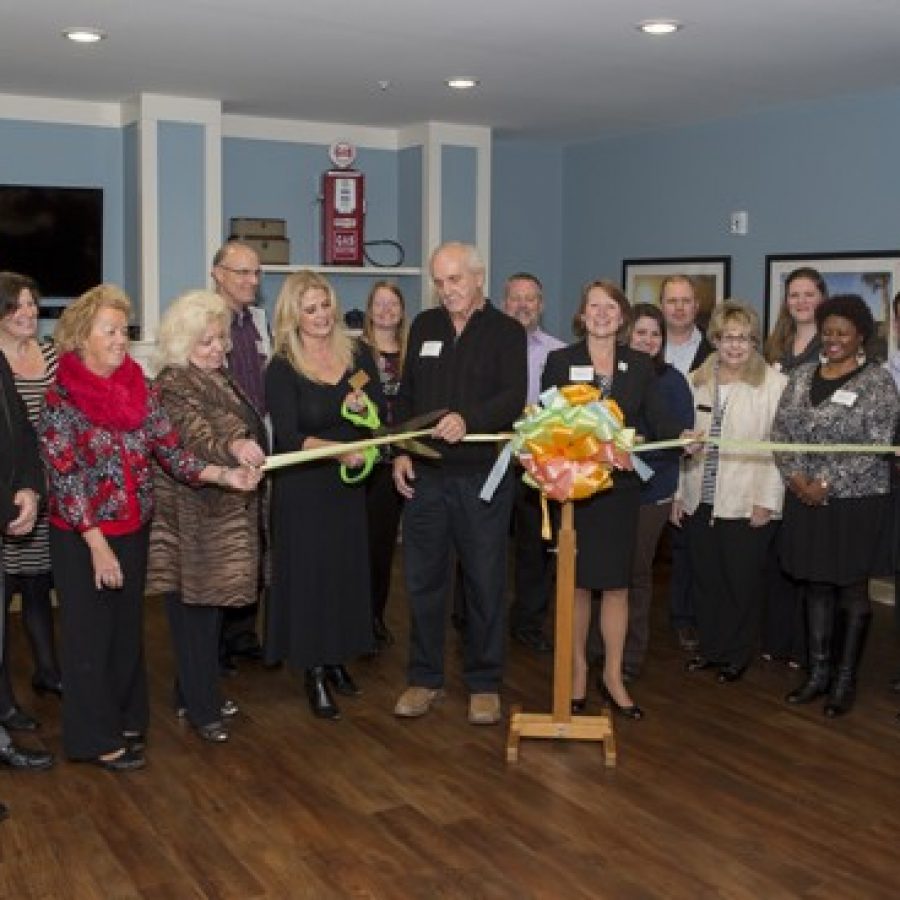 No one disputes that the National Church Residences Telegraph Road building in Oakville had a rockier path to opening than any of the hundreds of other apartment complexes that the nonprofit developer has built across the country.

But the unwelcome reception that the 6050 Telegraph Road building received from Oakville residents concerned about the senior apartment complex’s size and location was a far cry from the building’s ribbon-cutting ceremony last month.

Other than a few allusions to the battles at the county level against the three-story, 45-unit, $5.1 million building, the event seemed like any other ceremony officially welcoming a newly opened retirement residence.

After a massive backlash from Oakville that mostly focused on the size and sideways location of the apartment complex — funded by a $6.1 million low-income-housing grant from the U.S. Department of Housing and Urban Development, or HUD — 6th District County Councilman Steve Stenger, D-Affton, who initially supported the project, convinced the County Council to send the already-zoned project back for rezoning.

The building is feet away from the Goddard School, but like the surrounding neighbors, the preschool’s owner, Cindy Pyatt, said she never heard a word from the county about it, despite multiple public hearings that no one attended. Cloistered nun Sister Mary Michael emerged from the neighboring Monastery of St. Clare to ask the Planning Commission to stop the project because, she said, the nuns never knew about it. Eventually, construction and approval of the building went on anyway, but the outcry led county officials to revamp the way they notify neighbors about incoming zoning projects.

Residents of the complex say they have formed a community, their apartments are beautiful and they are happy in their new home — and happy that the effort to stop its construction was unsuccessful.

“They really fought for it, and I’m glad they won,” said Christine Merta, 62, who moved from Arnold to NCR when it opened in June.

Stenger said he expects the county to see more and more senior housing due to its aging population, and he has heard no complaints about the complex since it opened.

“I would not have voted for something if I thought it was going to have a deteriorating or debilitating effect on the district, and it has not and it will not,” he said. “It’s just a retirement residence, that’s all it is.”

Joining other Oakville residents who have said they were inspired to become more proactive in local issues after they felt they were blindsided by the NCR apartment building, Goddard School parent Samantha Stormer, an outspoken opponent of the building, was elected to the Mehlville Board of Education last April.

“My problem has always been the location of it and the fact that it sits on top of the school,” Stormer said. “It’s an eyesore.

“Aesthetically, the building is ugly. The land is entirely too small, and I don’t like that it impeded on the sisters in the back. The whole process (at the county) was … non-existent.”

South County Chamber of Commerce President Teresa Dorschorst said the chamber took no side in the debate, but she welcomes NCR to the neighborhood.

“We are so thrilled to have you and all of your residents to be with us and to be part of our community, and we think it’s a very positive thing for the Oakville area and for south county as a whole,” she said as she helped cut the ribbon. “So we would like to welcome you.”

The interior of the building is so upscale that Dorschorst told the Call it reminds her of the interior features of The Gatesworth, a retirement community in Ladue where seniors might pay $5,000 a month in rent, compared to the roughly $315 NCR residents pay.

Opposition to the building also galvanized some residents, led by Rep. Marsha Haefner, R-Oakville, to form a committee to research either incorporating Oakville as a city or breaking off from St. Louis County into their own county. Haefner, who won re-election unopposed in November, has filed bills at the state level to make incorporation easier, especially in the event of a city-county merger.

Like other officials and Oakville residents, Haefner questioned why the company would wedge the apartment complex sideways so close to Goddard when larger lots were available elsewhere on Telegraph.

Norris dedicated the building’s opening to the man she credited with finding the land, Ballwin housing consultant Elmer Smith, who never saw the building open because he died in May, age 87. Smith was a director of revenue and Republican Party chairman at the county level, as well as a longtime HUD official before starting E.E. Smith Co., a housing consultancy, which found the land for NCR.

National Church Residences paid Christine and Marcus Balch of Concord $575,000 for the 1.4-acre site, which formerly housed a single-family house set back from the road.

Just as NCR spokeswoman Karen Twinem told the Call in the midst of the furor over the building, the Telegraph Road complex’s residents are mostly older women, many of them widows. Even if they previously lived in the city or in other parts of the county, many of the residents have children who live in Oakville.

If the sentiments of the residents the Call talked to are any indication, turnover could be low: More than one resident the Call talked to said they are so happy in their new homes that they will not leave NCR until they are “in a body bag.” At their previous apartments, the women said they paid more money for apartments that were smaller or not as nice as their digs at NCR, without the sense of community they feel they’ve found in Oakville.