Musick Road closed through next spring for bridge replacement project 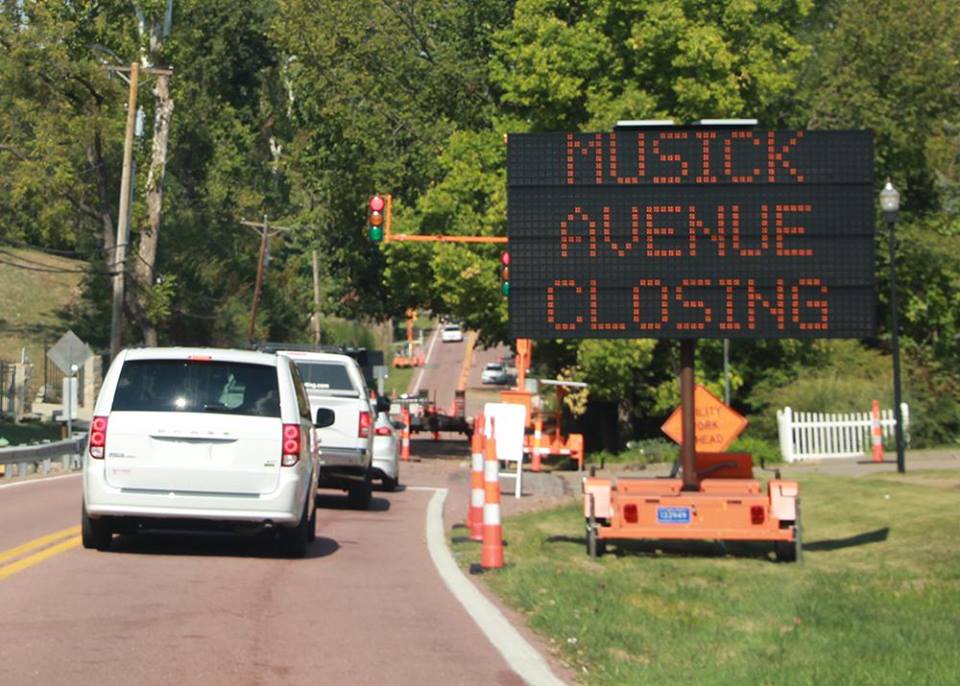 Musick Road is closed through next spring to replace a deteriorated bridge, causing delays for residents trying to get to Grant’s Farm, the Grant’s View Branch County Library and the new Dressel Elementary School.
The bridge, which is roughly a half-mile off Tesson Ferry Road, closed at sunrise Tuesday, Oct. 3, from Meath Drive to Lavinia Drive so that contractors could replace the 80-year-old bridge spanning Sappington Creek.
The bridge may not reopen until as late as April 1, county Department of Transportation spokesman David Wrone said in a news release.
The $837,000 bridge will be built by KCI Construction.
The bridge is busy, with roughly 5,000 cars driving over it on an average weekday, Wrone said in the release.
Along with Grant’s Farm, the library and Dressel Elementary, other attractions heavily affected by the closure include Officer Blake C. Snyder Memorial Park in Green Park, the Affton Athletic Association fields and Cor Jesu Academy.
The county is recommending that drivers avoid the closure by using Tesson Ferry, Baptist Church Road and Gravois instead.
The new bridge, also concrete, will have two lanes and a five-foot sidewalk with a concrete wall to protect pedestrians from traffic.
That is an improvement over the existing bridge, which like the rest of Musick has no sidewalks, Wrone said.
KCI is contractually obligated to finish and reopen the bridge by April 1, but the bridge could be finished earlier.
Official detour routes
Lindbergh Schools recommends that drivers follow the signed detour route and allow sufficient time for driving to and from school.
If extra traffic on Tesson Ferry and Baptist Church roads requires changes to bus routes, the district is ready to adjust them, officials said.
The district’s bus routes this year take the closure into account, so bus routes did not have to immediately change because of the construction.
The detours will probably require additional time for parents and students driving to and from school, the district said.
The county’s recommended detour route is:
• Dressel Elementary School — Driving north on Musick Road, turn left on Gravois Road, heading west. Turn left on Baptist Church, heading south. Turn left on Lindbergh, heading east. Turn left on Tesson Ferry Road. Dressel Elementary School will be on your left.
• Sperreng Middle School — Driving north on Musick Road, turn left on Gravois Road, heading west. Turn left on Baptist Church, heading south. Turn right on Tesson Ferry Road to Concord School Road.
• Lindbergh High School — Driving north on Musick Road, turn left on Gravois Road, heading west. Turn left on Baptist Church, heading south. Turn right on Lindbergh Boulevard, and LHS will be on your right.
Bridge deteriorating for years
The Musick Road bridge project has been in the works for years and in a March 8, 2013, letter, then-County Executive Charlie Dooley wrote the East-West Gateway Council of Governments in support of federal funds for the project.
“The 80-year-old bridge has begun to endure more ad-vanced deterioration in several existing concrete beams,” Dooley wrote. “This bridge is located on a county major collector and provides a vital connection to Grant’s Farm, a regional tourist destination, and businesses along Gravois Road.”
At 39 feet, the new bridge would be wider than the old bridge, which was 33 feet across, Dooley said.
Bridges have been a hot topic for the County Council this year, as a group of council members rebelled against funding a new Lewis Road Bridge in Eureka.
That disputed bridge over a railroad is ranked a “2” for a sufficiency rating.
In comparison, the Musick Road Bridge was given a 33-percent sufficiency ranking when Dooley applied for federal funds in 2013, which ranked it as deficient.
In the application for East-West Gateway approval, the county wrote of the Musick bridge, “Bridge inspectors have observed advanced deterioration including cracking, spalling and delamination of the ‘T’ beams.”