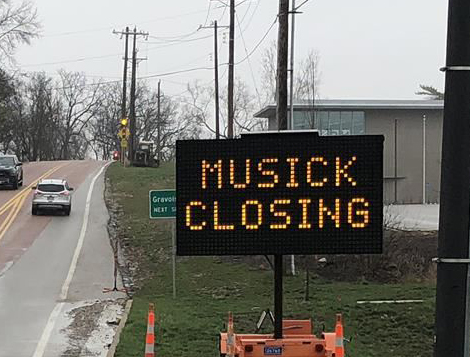 The Gravois-Musick intersection, with the Grant’s View Library on the right.

Construction at the intersection of Musick and Gravois roads is delayed, again, after originally being slated for completion by the end of 2018.

The delay this time was caused by contractors finding an unexpected subterranean concrete wall owned by Missouri American Water Company in the southeast corner of the intersection.

The L-shaped concrete wall protects a large water line, and the water company conceded that they should have alerted contractors to the existence of the wall beforehand, said David Wrone, spokesman for St. Louis County’s Department of Transportation.

The $1.3 million construction project was spurred by the opening of the Grant’s View Branch of the St. Louis County Library at the intersection in 2015. The county Planning Commission would not allow the library to open a Gravois entrance without the road upgrades. Currently the library shares an entrance with the McBride & Son subdivision, Grant’s View.

This is the second time the project has been delayed due to workers finding obstacles in the ground. Earlier this year, workers found an AT&T cable buried along Gravois that required the original design plans to be redrawn and the cable to be dug up and relocated.

At the time, Wrone said that the intersection would reopen in May. But the discovery of the underground concrete wall in April pushed completion back.

Due to the concrete wall, the intersection had to be redesigned again, this time involving input from both Missouri American Water and the Missouri Department of Transportation, which is the agency maintaining Gravois.

“We are now finalizing that new design, and hope to complete the project by late summer,” said Wrone in an email to The Call. “We are acutely aware of the inconvenience and stress these repeated delays have meant for area residents and drivers, and very sincerely regret that we weren’t able to get this project completed on time.”

The redesign will cost an additional $166,000 on top of the original $1.2 million project. Missouri American Water plans to reimburse the additional costs, spokesman Brian Russell said.

Wrone said that the additional $166,000 needed for the redesign was set to be voted on by the County Council Tuesday — after The Call went to press.

After the project is completed, there will be dedicated left and right turn lanes from Musick onto Gravois, a dedicated left turn lane from westbound Gravois onto Musick, a new entrance into the Grant’s View Library and improved site distance over the hill onto Musick by lowering it.

Musick has been closed in some form since 2017. It reopened in spring 2018 after closing in October 2017 at Lavinia and Meath Drive while the county replaced the 70-year-old bridge over Sappington Creek.