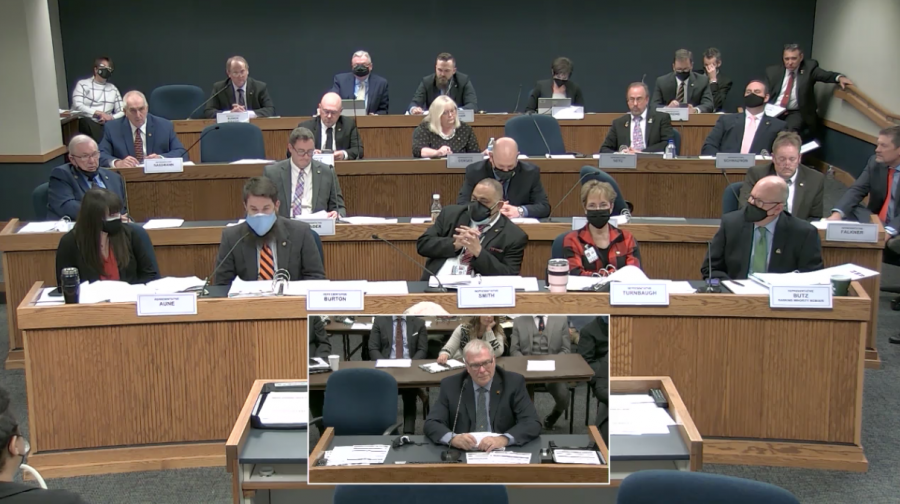 So many people wanted to pack the Jan. 26 evening hearing in Jefferson City that an overflow room was set up for witnesses and attendees. In the main hearing room, the 19 members of the Special Committee on Small Business socially distanced but only some wore masks despite current COVID-19 outbreaks in both the House and Senate — a count by The Call at the opening of the hearing found that nine of the 19 legislators wore masks, including Murphy and new Rep. Michael Burton, D-Lakeshire, who was just elected in November to serve the 92nd District.

One member of the committee, Rep. Tricia Derges, R-Nixa, who was just elected last year, was charged Monday in a 20-count federal indictment for selling fake stem-cell treatments and illegally prescribed narcotics at her medical practice in Springfield.

“Killing our small businesses is not a cure for COVID,” Murphy said to open the hearing. His bill would allow local jurisdictions to shut down for up to 15 days, but anything after that would have to be approved by the local governing body or by state legislators.

The committee itself took no vote, only hearing witnesses. The bill, House Bill 75, could be advanced by the committee as early as this week, Murphy said.

The hearing itself and the fact that it was held despite an active COVID-19 outbreak in the House, however, was later brought up by Gov. Mike Parson as evidence of bias against him. The day after the hearing, Republican lawmakers in the House declined to extend the traditional invitation to Parson to speak before a joint session of the Legislature with his scheduled State of the State address, something that happens annually for Missouri governors.

Across the nation, 18 of the 32 governors who have given or have scheduled State of the State addresses this year declined to hold them with a joint session of their state’s lawmakers, but Parson wanted to give the speech in the House and said the House embarrassed him when he had to give it in the Senate instead, without a joint session.

In the Jan. 29 letter to lawmakers, Parson brought up the committee hearing on Murphy’s bill, writing, “I could not understand why House leadership would condone such an unsafe hearing while preventing the State of the State from moving forward, as we had taken every precautionary measure to limit unnecessary attendance, ensure social distancing and provide overflow viewing areas.”

Parson wrote, “It is hard to see this as anything other than a purposeful and disgusting scheme to embarrass me and the Office of the Governor,” although he never mentions why specifically he believes that lawmakers targeted him.

During the hearing itself, which was Burton’s first since being sworn in, Burton and Murphy sparred over local control, how local governments are following data, and Burton defended the science behind wearing masks as an outstate lawmaker who is a physician questioned witnesses and disputed the data behind wearing masks.

“Actually sir, you’re reading the bill wrong. Nowhere does this say they can’t do what they want to do,” Murphy said.