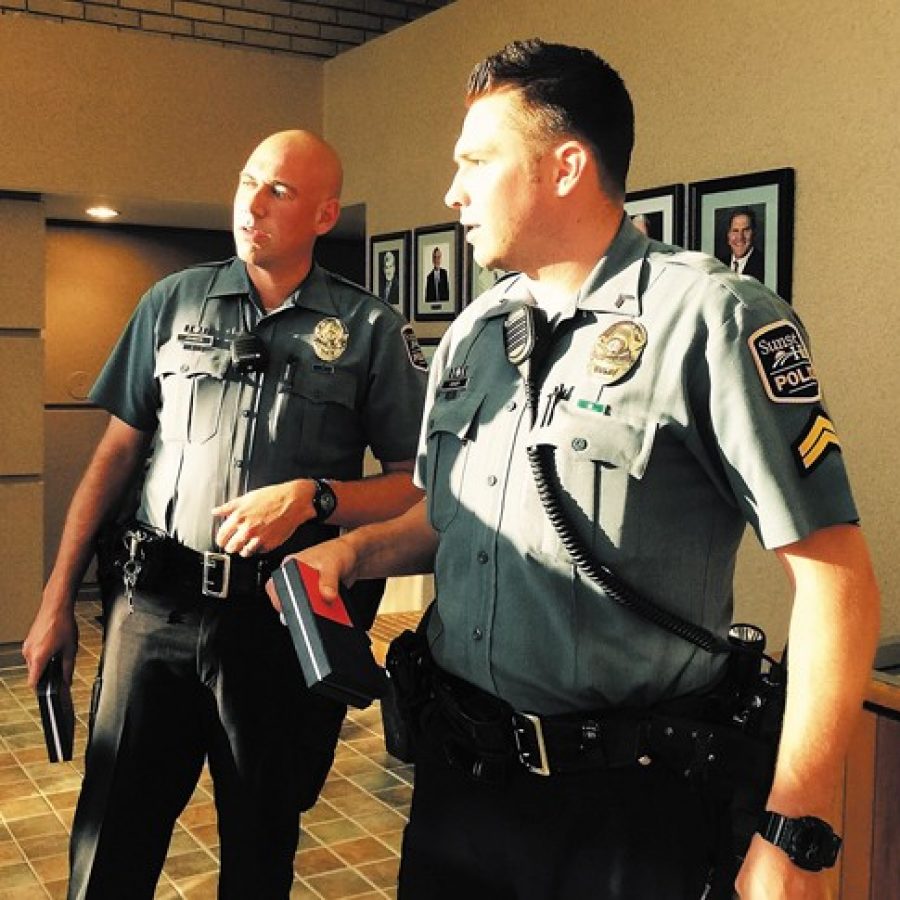 In the wake of a series of police shootings around the country and in St. Louis County, south county government officials have been weighing in with their support of the area’s police officers.

The day after a July 7 ambush in Dallas, Texas, that killed five police officers, Ballwin Officer Michael Flamion was shot from behind while making a traffic stop, an incident that was captured on video, Ballwin police say.

Restaurants and citizens throughout south county have contributed to Flamion, who is now paralyzed from the neck down and needs long-term care, Ballwin Police Chief Kevin Scott said.

In a third incident that week, an officer off duty from the St. Louis County Police Department shot and killed an Affton High School graduate who was allegedly breaking into the Affton house of the officer’s relative, with the officer’s family present.

Sunset Hills Mayor Pat Fribis, an Affton native, kicked off the city’s July 12 Board of Aldermen meeting by holding a moment of silence for the officers involved in all three shootings, along with “our Sunset Hills police officers that protect us and are there for us when we need them.”

After the moment of silence, Fribis encouraged residents to take blue ribbons to wear or hang on their mailbox to display their support of the city’s “outstanding police force.”

Police Chief William LaGrand thanked Fribis for the words and city residents for their ongoing support of the city’s Police Department.

“Thank you for your encouragement and support — the Police Department works very hard to provide the best local protection,” LaGrand said. “In the era in which we exist, where a lot of us feel like we’re under siege, it’s gratifying to receive that level of support.”

The signs of support that police officers see throughout Sunset Hills do not go unnoticed, the chief added.

“I feel the whole community of Sunset Hills supports us, and we appreciate that very much,” LaGrand said.

During Crestwood Ward 2 Alderman Justin Charboneau’s Police Board report last week, he commented on the Crestwood Police Department’s gratitude for the support it has received.

“We’ve received an outpouring of support from our residents and it’s been great,” Charboneau said, adding that many residents have gone so far as to ask police officers if they need any equipment to protect themselves beyond what they already have.

“At this time we’re good, but I told the chief that if the police do need any additional items to let us know,” Charboneau said. “If anyone sees a police officer, make sure to wave at them and let them know that we do support them and are thinking about them in these troubled times.”

“Tonight, the council’s wearing blue ribbons for our police that have fallen and those that have been hurt in the past week, and if we could take a moment of silence for those that have lost their life,” Harder said.

O’Mara also recognized 1st District Councilwoman Hazel Erby, D-University City, who said, “I think Mark covered it all, I wanted to say for everyone that has been hurt, the lives that have been lost over the last few weeks, our country’s been in turmoil and our heart goes out to all of the people who have lost loved ones over the last couple of weeks.”

“Prayers go out to everyone,” O’Mara said.

Officers from St. Louis County attended the memorial service for the Dallas officers, with the trip paid for by police unions.

The Affton Southwest Precinct has been inundated with support from the community, Capt. Jeff Fuesting tweeted.

“We cannot thank the community enough,” Fuesting posted on Twitter.