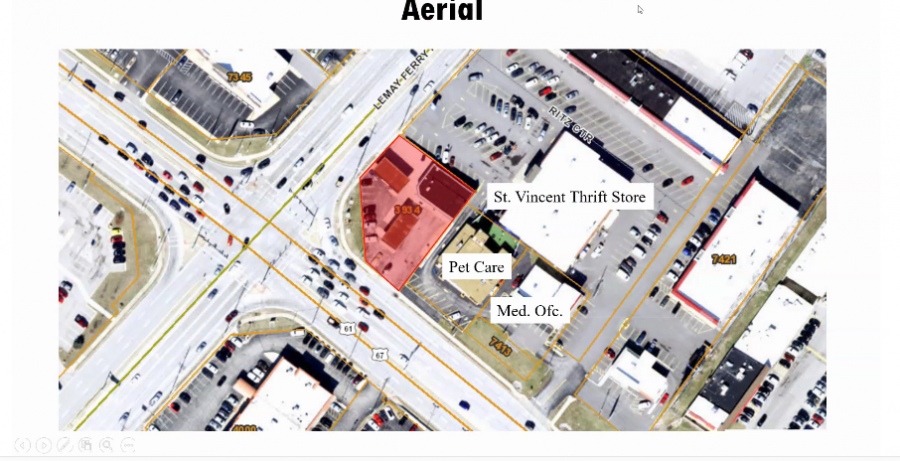 The Planning Commission showed this aerial view of the proposed site at the corner of South Lindbergh Boulevard and Lemay Ferry Road at the commission's March 8 meeting.

The St. Louis County Planning Commission voted unanimously 7-0 last week to recommend approval of a new QuikTrip gas station at the corner of Lemay Ferry and South Lindbergh Boulevard, across from South County Center mall, at the site of an existing auto repair shop. The large redevelopment will also take out the existing St. Vincent de Paul Thrift Store and The Watering Bowl, a daycare for dogs located behind the auto repair shop.

A second QuikTrip is also now proposed at the intersection of Lemay Ferry and Butler Hill Road at 5040 Lemay Ferry Road, the historic Session building, which previously was known as the Kassebaum building.

An in-person meeting about the Butler Hill QuikTrip was slated to be held Monday, after The Call went to press, at the JcPenney Home Store in the Marshalls Plaza along Lindbergh. A virtual meeting is slated to be held by Zoom at 6 p.m. Thursday, March 18, which can be joined by calling 312-626-6799, Meeting ID 941 878 2401 and Passcode 63303.

If approved by the County Council, the Lemay/Lindbergh QuikTrip would replace the existing QuikTrip at 3475 Lemay Ferry Road.

The company previously built a new QuikTrip along Bayless to replace an existing store.

“We’re having to figure out where we move forward in the St. Louis area, this is a much better position for us, we believe we would be able to perform better at this location than further down the road where we’re at,” said Gwen Keen, real-estate manager for QuikTrip, about closing the existing Lemay Ferry Road store in favor of the Lemay Ferry-Lindbergh location.

Keen confirmed to The Call last week that the company is looking to open two new QuikTrips along Lemay Ferry.

No one spoke at the Jan. 25 public hearing about the Lemay-Lindbergh QuikTrip.

Keen did not mention at that meeting that the company was also considering another store along Lemay Ferry Road.

A state-funded history of historic buildings in South County written by historian Esley Hamilton noted of 5040 Lemay Ferry that August Kassebaum “built an attractive store a few doors down from his house. It is one of the best and best-preserved examples of a rural commercial building in the county. … It is an outstanding example of a rural commercial building, one of very few left in the county.”

At one time the building was slated to be removed for a road realignment, according to the book at the time it was published.

The county Department of Planning recommended approval of the Lindbergh QuikTrip because it is “basically in the commercial heart of South County, South County Center mall is just basically across the way,” said planner Jacob Trimble, noting that the area is an “intensely commercialized and auto-oriented corridor.”

The rezoning for the 0.39-acre site consists of a relatively minor change from C-8 Planned Commercial to C-3 Shopping District, Trimble noted. When the zoning code first went into effect in 1965, the property was zoned C-3 and that was changed to C-8 within the last 20 years. The surrounding lots all have C-3 zoning, so a “reversion to the C-3 makes sense and would bring it back into harmony with its adjoining zoning,” he said.

Savoy Investments owns the surrounding sites rented to St. Vincent de Paul and The Watering Bowl, and has the corner site of Lindbergh Tire and Auto Center under contract, Keen told the Planning Commission at the Jan. 25 public hearing.

QuikTrip plans to build and lease the land from St. Charles-based Savoy.

The parking lot for the QuikTrip, which would have gas pumps and a canopy, will have cross access to the Ritz Center shopping plaza and the other businesses in that area, improving traffic, Keen noted.