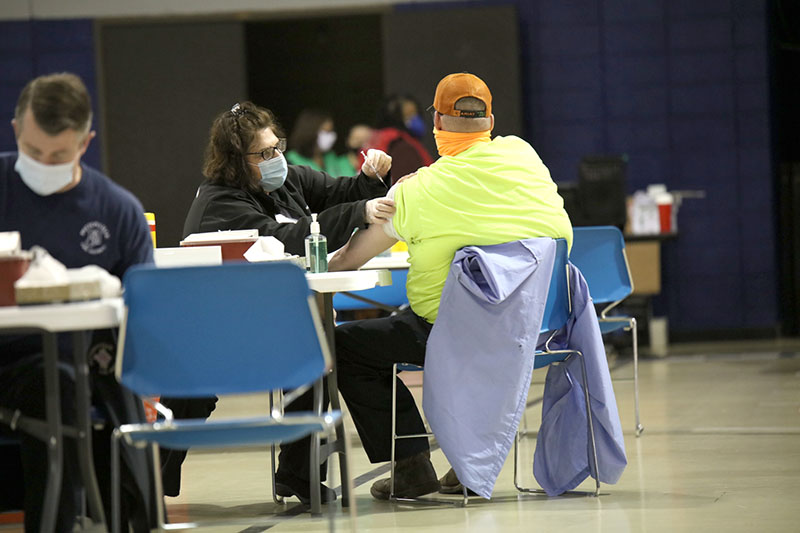 Activating the next phase — Tier 3 of Phase 1B — follows the state’s priority to save lives, Parson said.

“This is exactly why we started with our healthcare workers, our first responders and our most vulnerable population. Tier three represents another very important part of our society,” Parson said. “They are the workers in many of the industries we depend on each day to keep our day-to-day lives operating normally.”

Parson’s announcement comes days after the state health officials told vaccine providers to begin to prepare for expanded eligibility and follows growing calls in recent weeks for educators to be made eligible now.

It also comes hours after local public health officials expressed concern to Parson’s advisers that opening up the entirety of Tier 3 at once may be too chaotic.

“If we open up the whole tier, that’s going to be challenging,” Rex Archer, the director of health for the Kansas City Health Department, said during a Thursday conference call with members of Missouri’s Advisory Committee on Equitable COVID-19 Vaccine Distribution.

State health officials have said there is no set threshold for when the state’s phases would be expanded and have thus far resisted calls for eligible underlying conditions to be expanded and for teachers to be moved up into a higher tier.

Parson said Thursday’s announcement was in part due to an anticipated boost in Missouri’s vaccine supply following the expected authorization of Johnson & Johnson’s one-dose vaccine that can be kept at normal refrigeration levels for at least three months.

Activating the next tier will make sure there is a steady flow of eligible residents to receive a vaccine, Parson said.

“This allows the vaccinators across the state to continue vaccinating Missourians without having to wait on those who don’t want one,” Parson said.

While the state anticipates Johnson & Johnson doses to be shipped to Missouri soon after its approval, there is still not enough vaccine to currently cover all those eligible.

More than 3 million people are estimated to fall under Missouri’s current tiers. The activation of Tier 3 of Phase 1B will add an estimated 550,000 eligible residents. Parson said of the 3.5 million residents that will be eligible, a Missouri Hospital Association study found about 40 percent will choose not to be vaccinated.

Meanwhile, according to the state’s dashboard 756,334 people have received at least the first dose as of Wednesday.

Currently, the state has been working through vaccinating groups like healthcare workers, long-term care facility residents and staff, people 65 years and older and those with certain underlying health conditions.

“We still have to remember there’s lots of people out there that haven’t received the vaccine yet, especially our seniors — the ones we should all take a backseat to and make sure they get that vaccine,” Parson said.

This week alone, Parson said the state was allotted over 120,000 initial doses of Pfizer and Moderna’s vaccine, with expectations that will increase even further next week. If vaccine supply continues to increase and steady progress is made, Parson said Phase 2, which includes additional essential workers and groups like people experiencing homelessness, may be activated as soon as 45 days after March 15.

“Getting educators vaccinated as soon as possible is an important step toward keeping educators in the classroom and providing our students with in-person instruction,” Hayter said in a statement.

Less than two hours ahead of Parson’s announcement, members of Missouri’s Advisory Committee on Equitable COVID-19 Vaccine Distribution were asking if it could be clarified further.

“… Although I know that the governor may have actually already made a decision,” Archer said, “but maybe we can talk it through a little bit and see if part of that decision could be refined before it’s announced.”

Members of the committee suggested certain groups be prioritized, such as teachers, in order to give vaccine providers some direction.

Larry Jones, executive director of the Missouri Center for Public Health Excellence and a member of the committee, also suggested getting input from agencies like the Missouri Department of Economic Development to help weigh in on how to prioritize various groups of essential workers.

“I just think it’ll be easier for all of our vaccinators if they’re working from the same page,” Jones said.

Adam Crumbliss, director of DHSS’ Division of Community and Public Health, told members that the state is attempting to take a holistic approach that takes into account both demand and the projected jump in supply.

“I think at times one of the challenges is, when we look at the data and we look only at the demand and we leave the supply side out, that has a capacity to stunt and distort the decisions that are being made,” Crumbliss said.

The arrival of the Johnson & Johnson vaccine will also raise new questions for the state, like which groups the one-shot vaccine will be targeted toward and how to overcome potential hesitancy around its efficacy.

Local public health officials have suggested it be prioritized for people who are experiencing homelessness to eliminate the need to return in three or four weeks time for a booster dose, like Pfizer and Moderna’s vaccines require.

An analysis issued by the Food and Drug Administration Wednesday found that Johnson and Johnson’s vaccine offered strong protection against hospitalizations and death. It had an 86-percent efficacy rate against severe forms of COVID in the U.S. and a 72-percent overall efficacy rate in the U.S. Pfizer has said its vaccine is 95 percent effective, and Moderna said its vaccine is 94.5 percent effective.

On the question of efficacy, Scott Clardy, assistant director of the Columbia/Boone County Department of Public Health and Human Services who serves on the advisory committee, said he is already hearing from residents eligible under Tier 3 saying that “they don’t want the Johnson & Johnson vaccine because they know it’s less effective.”

“If the goal is to open it up to Tier 3 because more vaccine’s going to be available —  which I think is great — but we’ve all got to be on the same page about how we’re going to answer those concerns and respond to that,” Clardy said.

Lawmakers from both rural and urban areas have expressed frustration with the state’s rollout, saying that their residents are being left behind. From overwhelming demand to barriers like a lack of internet access, residents across the state are still struggling to access the vaccine.

The state has said it is allocating vaccine to the state’s nine Highway Patrol regions proportionally based on population.

But counties still vary widely on the percentage of their residents with at least the first dose — with the top counties reaching nearly 20 percent, while the lowest have less than half that at roughly 5 percent.

Parson pushed back on criticism that urban metros aren’t receiving their fair share, and stressed mass vaccination events in more rural areas are open to all residents in the region. As supply increases, Parson said he anticipates multiple mass vaccination events supported by members of the Missouri National Guard will be scheduled in the state’s largest cities — something lawmakers have called for.

Senate Minority Leader John Rizzo, D-Independence, told reporters Thursday that the state’s activation of the next tier should be based on how much vaccine is coming to the state and stressed that residents from areas like St. Louis and Kansas City shouldn’t have to drive to rural areas to find an available appointment.

“In my opinion, a lot of it’s dictated upon how much we can get in the door and out the door with the delivery system,” Rizzo said, later adding, “I would take care of the dense populations first — not because I represent one — but because it’s a communicable disease and that makes sense.”