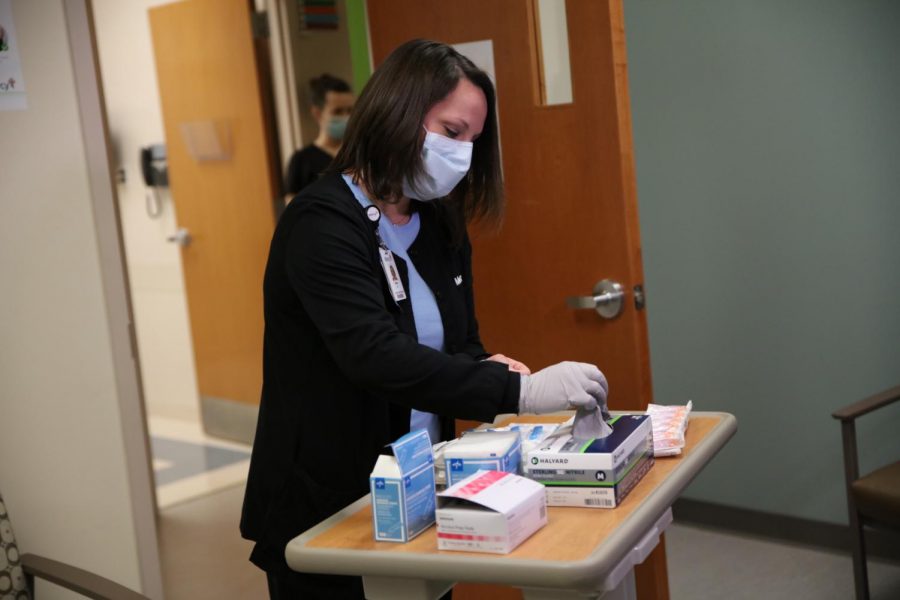 Out of the 50 states, Missouri ranks last in the nation in terms of the percentage of its residents who have received the initial shot of a COVID vaccine.

Only 4 percent of Missouri residents have received the first of two shots, according to data from the Centers for Disease Control and Prevention compiled by The New York Times.

But the full picture can be more complicated.

With states receiving varying amounts of vaccine from the federal government, comparing them based on how much of their supply has been given to residents is a better metric, said Amesh Adalja, a senior scholar at the Johns Hopkins Center for Health Security and an infectious disease, critical care and emergency medicine physician.

“What I really would hold a state accountable for is, of the vaccines they got, how many of them are still sitting in freezers?” Adalja said.

By that metric, Missouri is still toward the bottom of the country, but ahead of nine other states — with about 48 percent, or 317,737 of the 661,400 doses it’s received, reported as administered to residents as of Sunday.

The national average is 53 percent — with about 21.8 million shots given out of the 41.4 million doses distributed.

Meanwhile, West Virginia and North Dakota are leading the country, both administering over 80 percent of their allocated doses.

State officials have said Missouri’s percentage is likely higher, pointing to delays at a local level when it comes to providers on the ground entering in data and vaccinations within long-term care facilities.

“We’re in a little bit of a race,” Randall Williams, the director of Missouri’s Department of Health and Senior Services, said during a press conference last week. “And so, we’re doing everything we can to distribute the vaccine as quick as we get it.”

The amount of vaccine administered appears to be increasing, according to figures shared by Adam Crumbliss, the director of DHSS’ Division of Community and Public Health, during a call with vaccinators last week.

“A week ago at this point, we were averaging about 36 percent of vaccine going into arms, but on the latest data that I saw, I believe this morning, we were a little over 50 percent,” Crumbliss said on Thursday’s call. “So we’ve had some very good gains on that front.”

Gov. Mike Parson has regularly tweeted out higher numbers of doses administered than what the CDC’s data reports. The CDC’s own data also notes that federal figures may differ because there may be a delay between when a vaccination record appears in a state system and when it’s received by the CDC.

After providers receive a shipment, they must administer their doses within 10 days. The CDC says vaccinators should report data within 24 hours after a dose is administered, and Missouri’s standing order for Pifzer and Moderna says providers should enter data into the state’s system within 24 to 48 hours. State officials are urging Missouri providers to do so.

“We’re dependent on them reporting to us,” Williams said during a press conference last week. “My hunch is that they’re using that 10-day window and they just haven’t reported it yet.”

Last week, Parson said that at least 68 providers are entering that data manually, slowing the process down and creating a backlog.

On a call Thursday with the state’s vaccinators, Lynelle Paro, the assistant bureau chief for DHSS’ Bureau of Immunizations, stressed the importance of providers updating daily the number of doses on hand, as it’s a factor the federal government looks at to determine how much vaccine Missouri will be allocated each week.

“We have started looking at that as well to determine if we look at a provider who has 27,000 doses on hand and is requesting another 5,000 doses — it’s hard to determine why they would need additional doses,” Paro said on the call.

Last week, about 26,000 doses of the roughly 150,000 the state allocated were reported as being administered, Williams said Wednesday.

Altogether, 22,215 doses have been administered in nursing homes and 12,851 in long-term care facilities as of Sunday, according to CVS.

Adalja said that barriers that slow down the process, from appointments to paperwork, need to be removed so it’s as seamless as possible.

“It needs to really be just a streamlined process that allows vaccine to be put into people’s arms (at) basically no speed limit. Right now, there’s a lot of speed limits in place,” Adalja said.

The state is attempting to quickly boost the number of vaccines administered with the addition of 27 mass vaccination sites supported by the Missouri National Guard that can administer up to 2,500 doses per day, smaller targeted teams and administrative assistance to alleviate data backlogs.

About 1,950 residents signed up for the first mass vaccination event Friday in Poplar Bluff, with more scheduled to begin across the state. On Monday, MU Health Care opened a site to facilitate large-scale vaccinations inside the Walsworth Columns Club at Faurot Field.

“…Ultimately, the goal that we’re keeping everyone focused on is keeping the process moving of getting Missourians vaccinated,” Crumbliss said on Thursday’s call. “And how we do that is less important to us than the fact that it’s done safely, it’s done effectively and that every Missourian who wants to be vaccinated has the opportunity.”

Missouri’s vaccine allocations were significantly lower than expected last month after incorrect numbers in a federal software system caused estimates to be slashed. Supply continues to be the “rate limiter” that state officials have pointed to as restricting their ability to vaccinate more residents.

Last week, Paro said during a call with the state’s Advisory Committee on Equitable COVID Vaccine Distribution that Missouri anticipates being allocated about 38,025 doses of Pfizer’s vaccine and 38,200 of Moderna’s a week — a total of roughly 76,225 doses.

Meanwhile, an estimated 2.5 million residents fall within the second tier of Phase 1B alone — making up about 40 percent of the state’s population.

But a limited supply shouldn’t prevent states from quickly administering what they do have, Adalja said. A lesson Missouri can learn from states like West Virginia — be proactive and engage all sectors of the community, Adalja said.

“We knew that there wasn’t going to be a lot of federal support early on for this,” Adalja said. “And I think it was important to be proactive, and just try to get the vaccine in as many places as possible for people to use it.”