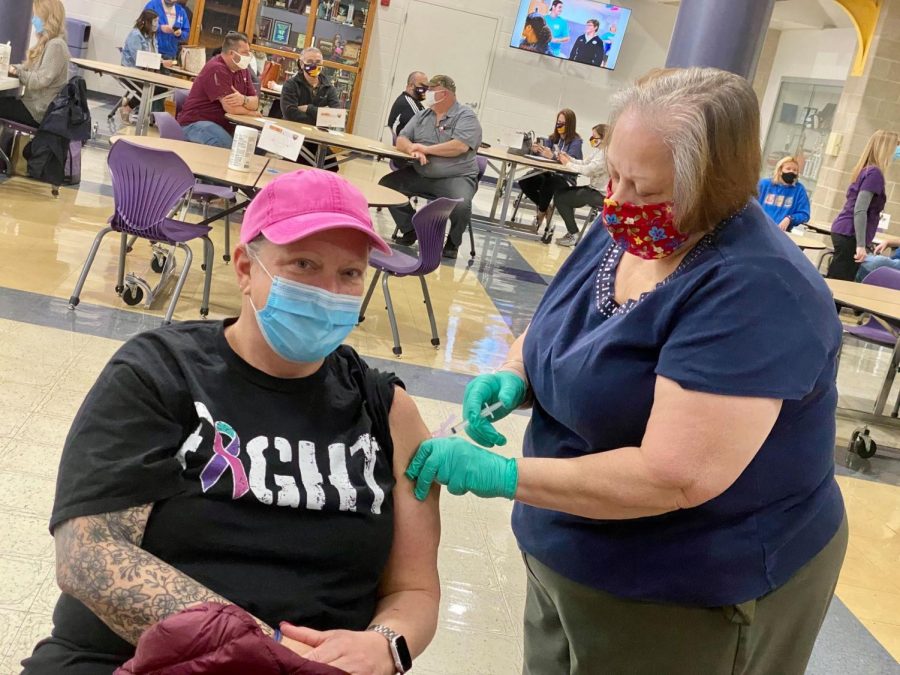 The Affton School District held a vaccination event for its teachers and other staff members the first day teachers were eligible for the COVID-19 vaccine Monday, March 15. Other school districts like Mehlville and Lindbergh have also hosted events to vaccinate their staff.

As the state of Missouri battles its second year of the novel coronavirus’ spread, lawmakers on Wednesday sent to the governor’s desk a bill that aims to rein in local public health orders and ban vaccine passports.

The provisions were included on House Bill 271, which deals with local government transparency. It grew from three pages when originally filed to nearly 100 when finally adopted. The House and Senate both gave the bill its final approval Wednesday. It now heads to the governor’s desk for his signature or veto.

Gov. Mike Parson has previously expressed support for both measures, despite the state’s decentralized approach to curbing the virus’ spread.

Parson declared Missouri “fully open for business” in mid-June and let the state’s social distancing order, which included limits on large gatherings and capacity for some businesses, expire. Since then, restrictions and whether to implement them have been left in the hands of local officials.

By the time the restrictions on local health orders go into effect, many of the state’s largest metros will no longer be under stringent restrictions like occupancy limits. Municipalities have mostly rolled back health orders in the face of falling COVID cases and rising vaccination rates.

But proponents of curbing local health authorities’ power have argued such restrictions are still needed — stressing that they will be in place for pandemics and outbreaks to come.

Under the bill, restrictions during a state of emergency would be capped at 30 days in a 180-day period. Extensions for an additional 30 days must be approved by a simple majority vote of the local health authority’s governing body — such as a county commission or city council — after a report is provided outlining the need for such an extension.

If health orders are issued outside of a state of emergency, then their length would be limited to 21 days in a 180-day period and require a two-thirds majority vote for extensions.

Local governing bodies would also have the authority to terminate any health order by a simple majority vote, and health departments under multiple counties would need approval from the governing body in each county.

The measure was a pared-down version of Senate Bill 12, which was sponsored by Sen. Bob Onder, R-Lake St. Louis, and had previously restricted health orders to a period of 15 days and only permitted their extension for an additional cumulative total of 30 days.

Business owners who spoke in favor of previous versions of the measure described difficult economic decisions that had to be made as a result of health restrictions — often directing their ire at St. Louis County Executive Sam Page.

Onder, who added the provision as an amendment, said last month, “in our democratic republic, there should always be accountability, ultimately to the people through their elected officials.”

When speaking against previous versions of the proposal that were stricter in scope, opponents expressed concern that severe restrictions could hamper health officials’ ability to quickly respond in future pandemics and pointed to the flip on the stance of local control.

Local public health administrators have described similar restrictions as “the biggest mistake” lawmakers could make and have pleaded for increased funding for public health.

In recent years, Missouri ranked last in the nation in terms of per capita state funding for public health, and some local public health departments struggled to receive federal CARES Act funds allocated to their counties amid the pandemic.

An emergency clause included in the bill that intends to prevent “threat of government overreach” means that the provisions limiting local health orders will go into effect as soon as it becomes law.

“I believe that any public entity should not be doing that,” Sen. Mike Moon, R-Ash Grove, who amended the language into the bill, said last month.

Similar provisions barring vaccine passports are moving on bills through the Legislature, and have been stripped down to only apply to government entities, rather than private businesses — a similar position that Parson has echoed.

“We don’t want the government to tell businesses what they can or can’t do,” Rep. Justin Hill, R-Lake St. Louis, said about Senate Bill 403 this week. “That’s very anti-free market. But we can tell government what to do.”