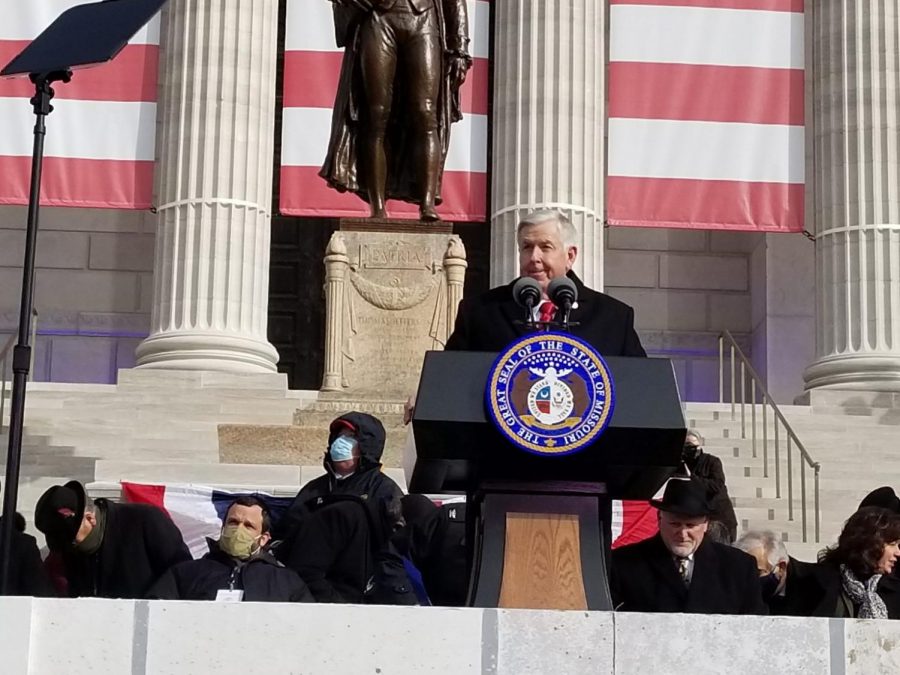 Missouri Gov. Mike Parson addresses the crowd gathered outside the state Capitol for his inauguration on Jan. 11, 2021 (Rudi Keller/Missouri Independent).

Gov. Mike Parson promised to work on behalf of all Missourians after being sworn in for his first full term Jan. 11 — though he didn’t mention in the speech specific items he hopes to achieve in the coming four years.

Parson, a Republican who ascended to the state’s highest office in June 2018 following the resignation of Gov. Eric Greitens, was sworn in by Circuit Judge Sarah Castle of Kansas City. Castle, who uses a wheelchair because she lost the use of her legs to a rare disease at age 11, was appointed by Parson to her current post in October.

In his speech, Parson alluded to a difficult year in 2020 but did not specifically mention the coronavirus pandemic that has sickened nearly 425,000 Missourians and taken almost 6,000 lives nor the summer of protests related to racial issues in policing.

“As we closed the chapter on 2020, we all had time to reflect,” Parson said in his address on the steps of the state Capitol in Jefferson City. “There were sad times, tough times, and exciting times. And through it all, Missourians prevailed.”

In a news conference after his speech, Parson said he has several big challenges facing his administration as the new term begins. The state, he said, must continue its battle with COVID-19 and get vaccines distributed, expand access to health care through telemedicine and the Medicaid program and address transportation issues.

So far, about 150,000 doses of vaccine have been injected in to Missourians, out of 420,000 doses received. The state will start the second step in distribution next week, he said, opening availability to first responders, essential workers, people over 65 and those 18 to 64 who are considered high-risk because of other medical issues.

On economic issues, Parson said the state needs to create a fair marketplace by revising sales tax laws to make out-of-state retailers pay the same as in-state sellers, he said. In the 2018 Wayfair decision the U.S. Supreme Court struck down rules that states could only tax retailers that had a physical presence.

This is Missouri’s bicentennial year, and Parson made the 200th anniversary of statehood the theme of his inauguration. Gary Kremer, director of the State Historical Society of Missouri, was the first speaker of the day, and some events that would normally take place on inauguration day, including a formal ball in the Capitol, are postponed until August to coincide with the anniversary.

Kremer, a fourth-generation Missourian, said the history of the state shows that diversity is its strength and he named Black and white Missourians who have excelled in science, the arts, sports and political leadership as examples.

The diversity of the state is even evident in the way the state’s name is pronounced, he said, and the crowd of about 1,200 was evenly split in its approval of “Missour-ee” or “Missour-ah.”

“How you pronounce it depends on your ancestral roots and where you live in the state,” Kremer said.

He won a full term as governor in November, defeating State Auditor Nicole Galloway with 57.1 percent of the vote.

In his speech, Parson extolled the strength and virtue of Missourians and promised his administration would give medical providers, teachers, law enforcement and farmers “the tools they need” to be successful.

“I will serve all Missourians, and do everything I can to make your lives better,” Parson said.

At the news conference, Parson said he will look for areas of agreement on issues rather than pushing his personal views on any issue as the only correct view.

“I think you need to respect one another,” Parson said. “Just because you think it is the right way, may be not what everybody thinks. Nobody’s thoughts should be forced on other people.”

Under the Missouri Constitution, this will be Parson’s only full term as governor because he served more than two years of the term begun by Greitens. He has said he is not interested in seeking any other offices after the term ends in 2025.

He will count it a successful four years, Parson said, if he can say when he is done that Missouri’s children are better off and can pursue the American dream.

To do that, he said, he will push for changes in early childhood education programs to give young people a better chance at success. He offered no specifics but said improvements must be made.

“If you keep doing the things the way we’ve have been doing them for decades, you get about the same response,” Parson said.