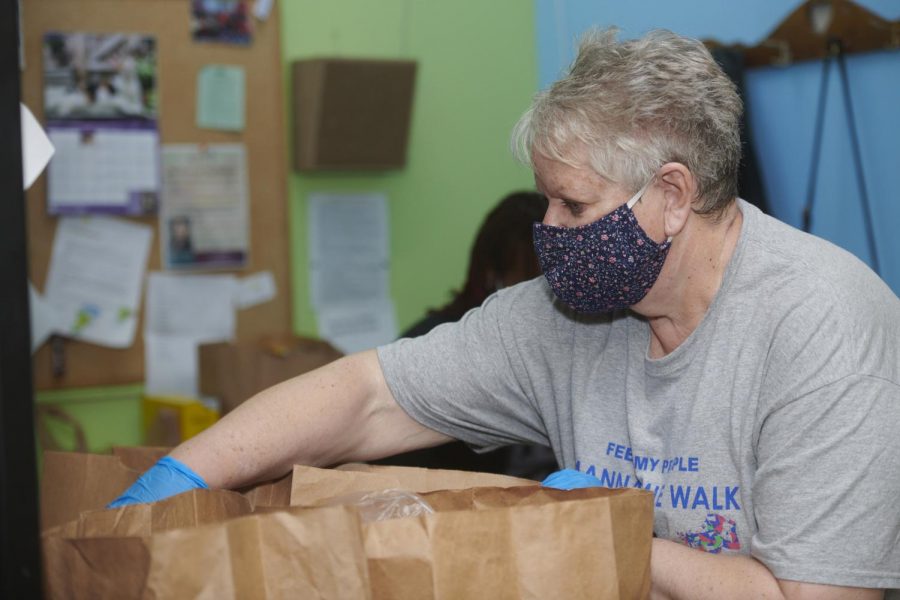 Feed My People volunteer Denise Huber follows COVID-19 safety precautions as she prepares and delivers grocery and personal care items provided by the nonprofit Feed My People at its facility in Lemay, Mo. It also operates a food pantry in High Ridge, Mo.

That money should be distributed to entities within the county, state Treasurer Scott Fitzpatrick said.

Fitzpatrick said the state is slotted to receive $2.83 billion from the CARES Act. He said approximately 25 percent, or $521 million, will be sent directly to local governments — which was decided by the supplemental budget the Missouri House passed April 7 — leaving the state more than $1.5 billion to cover other COVID-19 related expenses.

Fitzpatrick is the chair of the CARES Act Funding Working Group, which was formed to research and decide how to spend and disperse Missouri’s CARES Act money.

The group had its first meeting April 28 after the federal government released spending guidelines for COVID-19 relief funding the week before.

It approved a number of measures to help quickly and efficiently disburse the money allocated to local governments.

“This is a lot of money. We’re going to be give $521 million to counties, some counties where this is going to be a substantial portion of their operating budget for an entire year,” Fitzpatrick said.

“The expectation I have tried to set in the conversations I’ve had is that they’d administer grants to other local government entities.

“I think we can agree that is a faster and better way to get money downstream than trying to set up an application process for the thousands of political subdivisions that may try to apply for some sort of reimbursement,” he said.

Fitzpatrick said the amount each county will receive was decided based on population from 2019. A list of each county’s allocation was posted April 28.

The guidelines, a mere 3½ pages at that time, give state and local governments an outline of what the relief money can and cannot be spent on. While the group seemed to differ on how the money could be spent, they all agreed on what it could not be spent on.

“The guidelines pretty much explicatively say that this money cannot be used to plug revenue holes,” Fitzpatrick said.

That realization may dash the hopes of some lawmakers who had hoped this money could be used to boost falling state revenue, but Fitzpatrick said they just have to get creative.

“I think at the end of the day when the feds are giving us three and a half pages of guidance to spend $1.5 billion, there are going to be some judgment calls that get to be made, and they are going to have to understand that,” Fitzpatrick said.

The group identified areas where they want to focus this money, particularly on education, public health, government workforce and a major focus on small business recovery.

The Small Business Administration has already provided Missouri small businesses with $6 billion, with another promised $6 billion on the way, Fitzpatrick said. He added that if they do something to reimburse small businesses, they need to be strategic with how they handle it.

“If we did something, we want to make sure it’s meaningful,” he said. “Throwing a couple million dollars at a group that just got $12 billion in payroll support may not be the right model.”

Others in the group agreed and said they needed to tailor any funding to those that have been left out of other relief that has already been distributed.

“We need to find a way to narrowly target it so that we are really honing in on some of those people that have been left out or not received the PPP (Paycheck Protection Program) money or SBA loans,” Kendrick said.

Hough said whatever they do has to be well thought out and substantial, or “we are just throwing nickels into a problem that we can’t get our hands around.”

The group will continue to meet as it gets more guidance on what areas need funding and what it can spend the money on.