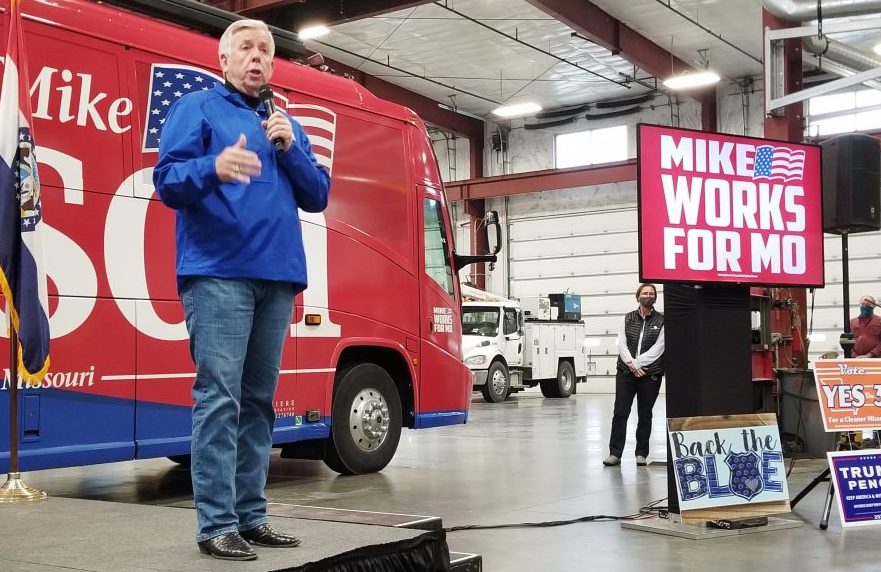 Parson, 65, led Galloway, 38, by more than 442,000 votes with over 95 percent of the state’s precincts reporting shortly after midnight, according to the Secretary of State’s unofficial results.

The Associated Press called the race in Parson’s favor around 9:40 p.m.

“This election was about preserving freedom, capitalism and the rule of law,” Parson told supporters gathered in Springfield Tuesday night. “However, there is more work to be done, and that work starts tomorrow.”

The race, considered one of the most competitive gubernatorial races nationwide amid an election year like no other, became increasingly contentious in the final weeks as polls showed Parson with a single-digit lead as Galloway gained ground.

“The governor and I have had our differences, but I respect the service he has provided Missourians throughout his career,” Galloway said from Columbia Tuesday night as she congratulated Parson.

Parson’s win will ensure the Republican Party’s continued hold on the governor’s mansion and both the state House and Senate. As state auditor, Galloway will continue to serve as Missouri’s lone Democrat elected statewide. Her office is on the ballot next in 2022. 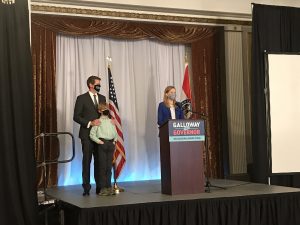 If elected, Galloway would have made history as the first woman to serve as Missouri’s governor, and she paid homage to the young women she met on the campaign trail.

“Tonight I may have come up short, but over the past 15 months I have met so many young women who I know will be future governors of Missouri,” Galloway said.

While Parson has served as Missouri’s governor since June 2018, Tuesday was the first time he’s been elected to the role. Missouri’s former lieutenant governor, Parson ascended to the state’s highest office after then-Gov. Eric Greitens resigned in disgrace that year.

Under the state Constitution, Parson is not eligible to seek another term in 2024 because he has been in office for more than two years of the term originally won by Greitens.

“Missouri is in good hands with a conservative leader like Mike Parson at the helm,” said John Hancock, chairman of the pro-Parson Uniting Missouri PAC.

Many welcomed Parson as a breath of fresh air at the time he assumed office, but Galloway has cast Parson’s term as a failed test of leadership.

Over the course of the campaign, Galloway criticized Parson’s handling of the pandemic, vowing to go where he would not, such as issuing a statewide mask mandate. With health care one of her campaign’s foremost issues, Galloway raised Parson’s opposition to Medicaid expansion and tied it to the public health emergency of the coronavirus outbreak.

Meanwhile, Parson has defended his approach that has largely left decisions in the hands of local officials, pointing to the need to keep the economy open to stave off further economic hardship. Parson and his wife, Teresa, both tested positive for COVID-19 in late September.

As Galloway called for “a complete reset” to the state’s pandemic response, Parson has largely focused on the need for law and order following protests decrying police brutality nationwide. The contrast was highlighted in a debate Oct. 9.

As the former Polk County sheriff for 12 years, Parson touted his support for law enforcement and made it one of the defining themes of his campaign.

But the pandemic will continue to be a major issue that demands Parson’s attention as new COVID cases, deaths and hospitalizations reach record highs in Missouri and lawmakers gather in Jefferson City for a special session to allocate federal CARES Act funds that must be spent by Dec. 30.

“We all must come together to defeat the virus,” Galloway said Tuesday night.

With both candidates supported by political action committees and national groups, over $40 million poured into the race ahead of Election Day. Galloway frequently cast the race as “neck-in-neck” as she worked to activate grassroots support, while Parson appealed to his Republican base and emphasized his Missouri roots as a farmer, sheriff and family man.

In the days leading up to the election, Parson intensely focused on shoring up support with rural voters while Galloway trekked across the state, including South County.

“This is our time. And I’ve said that time and time again across the state on every stop I’ve made for the last year, because I believe it’s me and you,” Parson said, vowing to protect the constitution.

Parson, a veteran and farmer, is no stranger to Missouri politics. He has served in the Legislature since 2005 as a state representative, state senator and later lieutenant governor.

A certified public accountant who got her start in public office as Boone County treasurer in 2011, Galloway vowed to continue to demand accountability and transparency from Missouri’s elected officials as state auditor.

Parson will be sworn in again in January. Until then, he will return to the Capitol Thursday, just two days after the election, for a special session to allocate remaining federal CARES Act funds.

See photos from Galloway’s campaign stop in South County below: