Mehlville Fire Protection District Board of Directors Chairman Aaron Hilmer and board Treasurer Bonnie Stegman celebrate Hilmer's re-election to the fire board in the April 4 election. The two were first elected in April 2005. Photo by Gloria Lloyd. 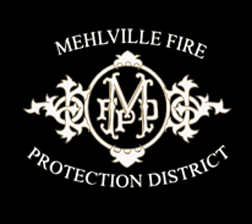 “That $166.4 million increase consists of $164.3 million in real estate assessed values and a $2.1 million increase in personal property assessed values,” he told the board.
The blended tax rate will decrease because “we’re restricted to growth based upon what the Consumer Price Index was. They used a figure of 2.1 percent, which is the maximum allowable growth that we can have,” Bond said. “Again, you can’t have just a financial windfall as a political subdivision. Just because the property values increase 7 percent, we don’t get a 7-percent increase in revenue.
“So because our increase was limited to 2.1 percent, our rates had to go down to offset that significant 7-percent increase that we saw on the assessed values.”
The approved tax rate is projected to collect roughly $16.92 million for the district, of which the county retains 1.5 percent for its administrative fee, leaving $16.67 million available to the district.
Regarding the tax rate, board President Aaron Hilmer told the Call, “We are happy to deliver the lowest tax rate for the last 12 years, but more importantly, we would like to thank the men and women here who have helped transform Mehlville into the premier destination district that it is today.”
Bond also presented to the board a preliminary 2018 budget that projects revenues of $21,212,542 with anticipated expenditures totaling $21,206,631 — a surplus of $5,911.
Mehlville’s current budget anticipates revenues of $20,575,486 with expenditures totaling $20,574,237 — a surplus of $1,249.
“In summary, the 2018 preliminary budget forecasts that the 2017 tax revenue will provide $462,000 more than the 2017 budget,” Bond said. “And due to the projected increase in tax revenue, along with some projected increases in interest revenue and ambulance collections and fee revenue, the 2018 preliminary budget forecasts $637,000 of increase in total revenue over the 2017 budget. So that’s the good news — revenue is up $637,000.”
Expenditures are projected to increase about $642,000, primarily because of the addition of seven full-time employees over 2017 and a 1.7-percent salary increase for employees, along with step increases.
Salaries will increase by $407,000 and benefits will increase by $340,050, while capital expenditures are projected to decrease by $105,000, according to the chief financial officer.
The board will consider approval of the final 2018 budget in December.
The preliminary 2018 budget also projects:
• That $971,000 will be transferred to the capital fund to address capital expenditures in 2018, including $300,000 for pumper reserve, $250,000 for an ambulance, $50,000 for aerial apparatus reserve and $50,000 in construction reserve for future engine house renovations.
• That $1 million will be transferred to the pension fund to address current-year shortfalls in the pension fund — $75,000 — and address future disability payments related to the district’s terminated defined-benefit pension plan — $925,000.
• That unscheduled overtime will be reduced to $600,000 from $836,000 to continue to operate the district’s sixth ambulance.
Regarding employee benefits, Bond forecasts a 10-percent increase in medical insurance premiums and a 5-percent increase in dental and vision benefits. The actual cost of the premiums will be known before the 2018 budget is approved.
Debt service of $287,000 is budgeted in accordance with the debt-service schedule on certificates of participation issued in 2000 to fund the expansion and renovation of the district’s No. 5 firehouse and administrative headquarters.