MFPD board candidates square off in fiery forum 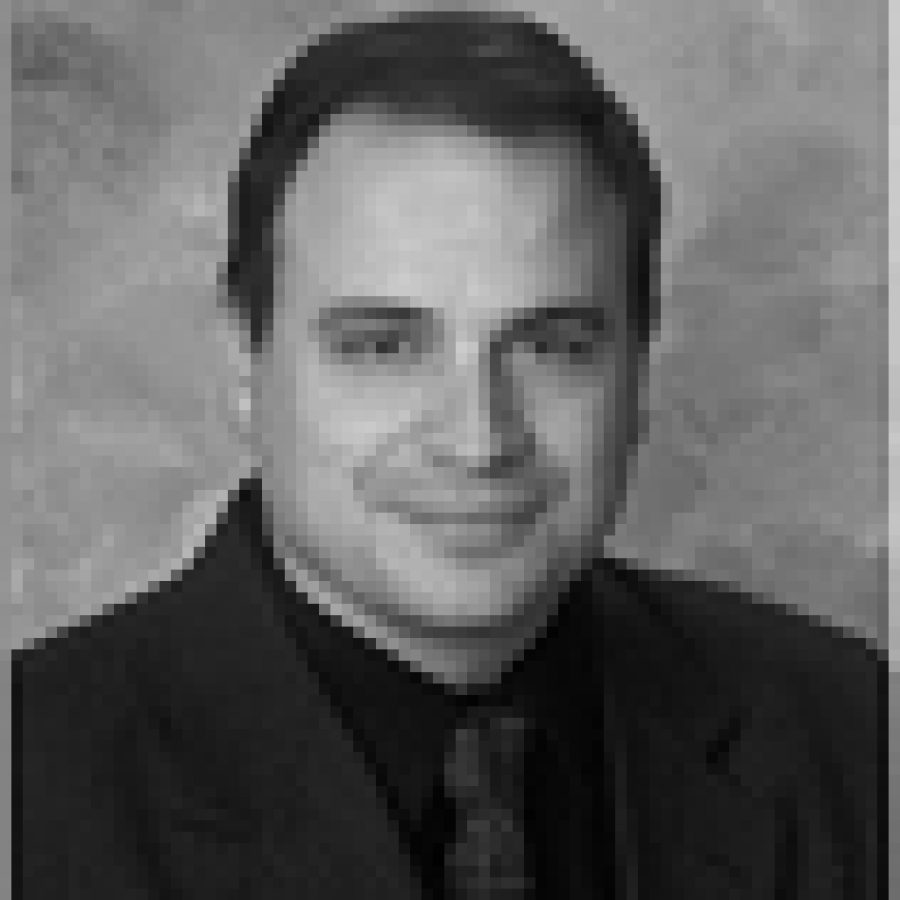 Two separate races for seats on the Mehlville Fire Protection Dis-trict Board of Directors have turned into a one-ring battle royal.

In the April 5 election, Stegman and Gralike are vying for the four-year seat. Gralike, the current board secretary, was appointed in August 2003 to fill a vacancy created by the death of former Chief Joe Gaterman, who was elected in April 2003.

Hilmer and O’Driscoll, the current board chairman, aim for the six-year seat along with Steven Mueller, who appears to be the lone candidate without a political partner.

In a rare election with two of the board’s three seats up for grabs, coupled with the alliances between candidates, district voters could overhaul the makeup of the board.

At a candidate forum last week, questions from the audience centered on a 33-cent tax-rate hike approved in No-vember and employee compensation packages, including sick leave and vacation time.

Hilmer and Stegman want to roll back the tax-rate hike, saying the board cut services while providing lavish em-ployee benefits.

Gralike, O’Driscoll and Mueller say the 33-cent tax-rate increase was the wish of the district’s voters and shouldn’t be rolled back.

“Every time they ran out of money, they chopped your services,” Hilmer said. “They allowed absurd pay benefits and pay packages to go on while they took away your services.”

With services cut, Hilmer said fire protection district em-ployees scared residents into voting for a tax-rate increase by spending $161,000 for a public relations firm to promote the tax-rate increase as “the difference between life and death.”

“It was an absurd waste of your money. You said no twice, the second time by a 2-to-1 margin,” he said, referring to tax proposals put before voters in April 2001 and August 2002. “The board did not respond to you, all they did was cut your services. A real illuminating conversation I had with a resident when he came up to me to discuss what Bonnie and I were doing, he said: ‘I voted for that. They told me they were desperate.’

“Well they must have been because the Board of Direc-tors threw in $250, the fire chief threw in $1,000 and district employees threw in over $10,000 to make signs that told you that a 36 percent tax hike was the difference be-tween life and death,” Hilmer added.

O’Driscoll said, “What you folks must understand is the Mehlville Fire District hasn’t had a tax increase since 1989. And in 1989, the voter-approved tax increase was to put four ambulances on the street, and we have been able to put five on since 1993 without asking you for taxes …

“You have to look at the history of this,” he said. “First of all in 1993, when I came on the board, we were already four years beyond the last voter-approved tax increase and from 1993 to 2001, I never asked the taxpayers for a nickel, not a nickel over and above what they were paying in taxes.

“It became obvious to me that we needed a tax increase to continue to provide the services. We went to the voters and we lost that election by less than 1 percent, ladies and gentlemen. We went back in 2002 to tell them: ‘Look, this is what’s going on, this is what you need to look at.’ Both of those times we tried to do it by ourselves communicating through a small newsletter at least in one instance. We finally decided to get the help of public communication people to get the message to you, and you responded in 2004,” O’Driscoll added.

While voters hadn’t approved a tax-rate increase since 1989, the board increased the tax rate from 84 cents per $100 assessed valuation to the current 90.5 cents, not including the tax-rate hike approved last November. The district’s tax base, meanwhile, has increased significantly, nearly doubling the revenue generated since 1989.

And in 2002, the board voted to eliminate the district’s fifth ambulance and a rescue squad because of budget constraints.

Earlier this year, the board reinstated the ambulance by voting to pay roughly $91,000 to staff it with two overtime firefighters until four more paramedics are hired in July. The board also voted to pay roughly $41,800 to pay overtime to keep the squad operational while firefighters take vacations in the spring and early summer. The 33-cent tax-rate increase will cover the cost of both.

“We were underfunded for the service that we wanted to provide,” Gralike said, “so we reached out to the public and we asked the public to come in and tell us what type of service you wanted and what you’re willing to pay for it. That’s what FACTS (Fire District Advisory Committee for Tomorrow’s Emergency Services) accomplished. They came back with this recommendation right here.”

Currently, the district is considering hiring up to 15 em-ployees.

“They reviewed the manpower, the equipment, the facilities, the insurance, the workers’ comp insurance needs, wage and benefits,” O’Driscoll said, referring to the FACTS-recommended tax-rate hike. “They came up with the document that Mr. Gralike showed you earlier. I would invite anybody to please take a look at it to see what your fellow citizens came up with to help us with directing the district into the future with a long-term plan.”

Referring to the tax-rate increase, Mueller said, “First I’d want to know where the money’s going. If the district’s getting to where it’s got to grow and expand, yes, but it’s not just to say that I’m going to raise your taxes and then not be respectable with your money because you just now know that St. Louis County assessed some people’s personal property taxes more by increasing the value of their property.

“No, I’m not going to increase your taxes without first knowing where all your money’s at. Then if we need to take it to the taxpayers, let them decide,” he added.

O’Driscoll and Gralike frequently said the taxpayers had decided last November. Plus, the FACTS committee made the recommendation, they said. The board only upheld its request.

“In 2002,” Hilmer said, “after the district was deficit spending its way through $10 million (in reserves), they were out of money. They were burning through their savings. The board gave everyone another 5 percent raise. This isn’t how you run your own household and certainly isn’t how your tax dollars should be spent.”

Hilmer and Stegman say the district has plenty of fiscal waste to eliminate. Gralike and O’Driscoll disagreed, while Mueller didn’t give any specifics.

“I think there’s plenty to look at for where you can do some savings,” Stegman said. “We can look at things such as health insurance, the amounts that we are contributing to it. There are areas that we can look at, so I disagree with the statement that there’s no place to cut.”

“I would like to see a listing of all the positions, their responsibilities and duties,” she said. “I think there’s some places where we may be able to combine some positions. I think we can eliminate a second EMS position. I don’t think we need two people to do one job.”

Mueller said, “If I find waste, I’d stop it. It’s that simple. I’d be accountable with the taxpayers money. I’m going to be straight with you. I’ve got to be responsible with your money.”

“First of all there is no waste in the budget of the Mehl-ville Fire Protection District,” O’Driscoll said. “There’s been a lot of talk and a lot of innuendo and a lot of statements about the fact that office employees receive a clothing allowance of $950 a year. That is absolutely true. One hundred and thirty-plus people in our district receive a clothing allowance. Most of them are out on the highways cleaning up the blood, the hazardous waste, the chemicals, and yes I made the decision to include the other four people in the bargaining unit when we decided to buy a clothing allowance for our employees. There’s no waste in our district.”

“Let’s talk about the office salaries,” Hilmer said. “The secretary with a $70,000 a year pay package, the absurd clothing allowances. When I requested documents from the district, I asked: ‘Do only the people in the bargaining unit receive the clothing allowance?’ The answer is no, every office employee receives it.

“Chief administrators in the district with six-figure pay packages receive 73 days off a year at full pay,” he said. “Ladies and gentlemen, that’s through the middle of April at full pay on a six-figure pay package. It is the height of lunacy to say there’s no waste in the district. This isn’t how you run your own pocketbooks, and certainly isn’t how your tax dollars should be spent.”

Rebutting Hilmer’s comments, Gralike said, “Unfortunately, if our employees leave, they’re not going to go to the surrounding districts, they’re going to go the 10 (high paying) districts I mentioned earlier. We need to stay in the median, We need to get our firefighters in the median … We want to be at the meat of that curve so we don’t have a revolving door where we have new firefighters every couple months because they’re using us as a stepping stone to get to a district that pays more. We want to be able to retain quality employees.”

“In 2002, we did give the employees a 5 percent raise,” O’Driscoll said. “That’s the truth that Mr. Hilmer just told you. What he left out was that it was the last of a three-year contract that we honored with them.

“We thought that was the right thing to do. In 2003, that same bargaining unit came back to us and said, ‘We don’t want to discuss any new packages until we can get our spending back in line,”’ he added.

In that three-year period, district employees received raises ranging from 15 percent to 19 percent in total.

Stegman said the district’s Board of Di-rectors should not only look at cutting ex-penses, but also consider consolidating with other districts to curb competition be-tween districts, equalize services in the county and reduce expenses.

“I think we need to look countywide and really look at combining the districts,” she said. “Maybe look at making a countywide fire district, do some consolidation where we could actually get better services to more people by allowing a more equitable spending level to multiple areas.”

Hilmer agreed. Mueller, Gralike and O’Driscoll did not.

“Personally, to consolidate, my opinion is no,” Mueller said. “It isn’t up to me. If the taxpayers want the fire district consolidated, it’s up to them.”