MetLife site neighbors turn out for a town hall 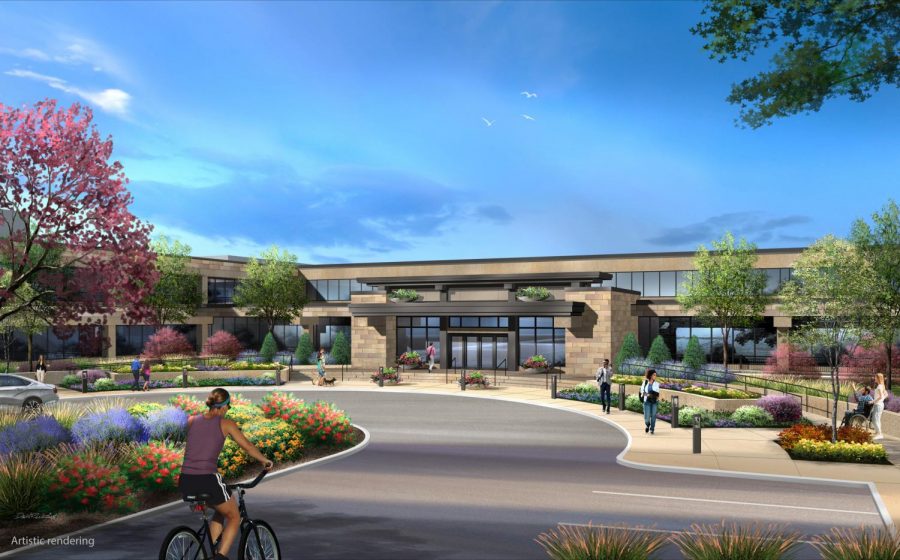 A rendering of the front entry of 'The Residences at Tesson Ridge' proposed apartment complex.

The in-person April 29 town hall co-hosted by 6th District Councilman Ernie Trakas drew between 50 and 75 socially distanced attendees, which required an assembly permit from St. Louis County because of capacity restrictions due to the COVID-19 pandemic.

St. Charles-based developer Propper Construction Services is proposing a mixed-use development that would cover the entire 100 acres with two new subdivisions with more than 170 single-family homes, a 210-unit apartment building and nearly 8 acres of commercial development along Tesson Ferry Road, with walking trails and public spaces like a plaza and amphitheater.

“What you’re here to see tonight and be part of is the way, in my humble opinion, development should work in St. Louis County,” Trakas said to open the town hall, noting that Propper came to him months ago, he gave them feedback on his concerns, and they adapted the plan.

Since the property is in unincorporated South County, zoning has to go through the St. Louis County Planning Commission and then Trakas and the County Council.

“An adaptive reuse is really ideal here. Preservation is the key consideration for this development,” said Propper Construction President Tim Breece. “We are going to modernize the site with an eye for conservation, and the project is going to preserve the existing structure as much as possible and reduce the environmental footprint that is out there on nature.”

Propper purchased the property from MetLife in October, and the insurance company officially cleared out of the 645,588-square-foot office building in November.  The parking underneath would be used by residents living inside the repurposed building, which would be converted into 210 luxury apartments. That reduces the need for the existing large lots.

“Another part we think is important here … is the preservation and conservation of green spaces. … We’re going to restore these green spaces,” said Breece.

The development would be divided into four planning areas: A commercial area with shops and restaurants known as The Shops at Tesson Ridge, the apartments inside the repurposed MetLife building called The Residences at Tesson Ridge, as well as two residential areas. Average rent for a one-bedroom unit in the apartment building would be around $1,835. Average rent for a two-bedroom unit would run between $3,000 and $4,000 a month.

“The rents are quite significant to hear, and it’s representative of the premier nature of this property,” said Breece. “Our market shows that we should fill and probably have a waiting list of sorts. … This is the type of project that we’ve seen has been successful in many other cities, and St. Louis (is) always just a little slow.”

Propper has not selected a homebuilder yet, but plans to make a selection once the plan moves through the first steps of zoning. The company hasn’t filed for zoning with St. Louis County yet.

“We’ve taken our time, we’ve had these discussions. … We’re here to get your input,” said George Stock, civil engineer and president of Stock and Associates. “This is county government at its best. Bringing the petitioner to your neighborhood. I can’t think of a whole lot of other opportunities … where I’m actually giving a presentation on the property in the building that is going to be repurposed.”

Stock and Associates Consulting Engineers have worked on a number of other developments lately in South County, including the Mercy Cancer Center at Mercy Hospital South and the St. Louis Children’s Hospital Specialty Care Center on Butler Hill Road.

Tesson Ridge would be developed in phases after zoning approvals. The full 100 acres is currently zoned C-8 commercial and would have to be rezoned for mixed use. Phase 1 would be “starting the character of that entrance road,” said Stock.

The representatives from Propper met earlier last week with the Mehlville School District, including Superintendent Chris Gaines, to discuss any possible impact the development would have since the 100 acres is located in Mehlville. The nearest schools for new students to attend would be Trautwein Elementary, Washington Middle School and Mehlville High School.

“The main thing to point out is not to have a negative impact financially on the school district,” said real-estate consultant Keith Kramer. “We will continue that dialogue to make sure there is nothing but a positive impact both in terms of financial contributions by this project through the real-estate taxes as well as no negative impact on the capacity of the schools and ability to serve the existing residents and their children here.”

Another person thanked the developers for bringing a “unique perspective” to the area, which garnered some applause.

“I for one would like to thank you for thinking of such a unique perspective in this area. I really appreciate you bringing this to South County,” said Marianne Ojile, who questioned whether changes would be made to the plan after zoning.

Stock said that it would depend on the amendments. The concept plan as a whole is approved by the council, and then a subsequent site plan is submitted for each planning area to the Planning Commission.

“So if we wanted to change from a 110-home area to 210 … that would require us to go back through a public process,” Stock said. “The ordinance is going to be there, it’s going to be mixed-use and it’s going to say what we can do.”

Each site plan for each area of the site will have separate approval processes.