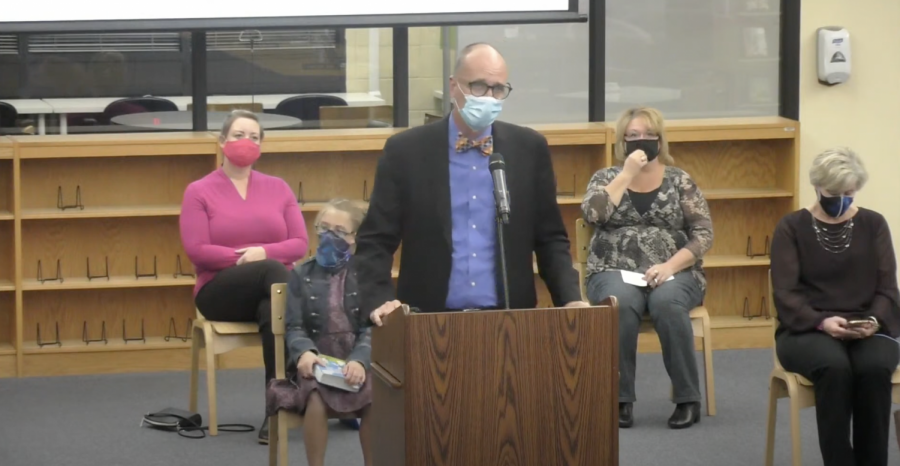 With parents and a student sitting behind him socially distanced, Mehlville Superintendent Chris Gaines presents bond issue information to the Board of Education, including conceptual drawings, at the Oct. 15, 2020, board meeting held in person at the Mehlville High School Library. The presentation was ‘very thorough,’ board President Kevin Schartner said. The meeting was also livestreamed.

Voters in the Mehlville School District might get the chance to do something this April that they haven’t done since 1992: Approve a bond issue for facilities.

The Mehlville School District is looking to place a 12-cent bond issue before voters this April as part of a plan to shore up district finances post-pandemic and spend $35 million to improve the safety and maintenance of existing facilities by adding secure vestibules to the front entrance of every school and upgrading bathrooms throughout the district.

Superintendent Chris Gaines told the public in 2017 that he would try to go for some type of ballot measure in 2020 to take advantage of the district paying off the certificates of participation, or COPs, for facilities that were issued from Proposition P, a 49-cent ballot measure approved by voters in 2000.

Gaines said he will recommend that the Board of Education place a 12-cent, $35 million bond issue on the April 6 ballot when it meets at 6:30 p.m. Thursday, Jan. 21, in a location not yet set at press time. The meeting will be livestreamed on YouTube.

The board declined to place the bond on the November ballot due to the economic fallout from the COVID-19 pandemic.

But the bond issue would be a no-tax-rate-increase ballot measure, with 12 cents dedicated to funding facilities improvements in every school in the district — mostly mundane items of maintenance such as upgrading bathrooms, outdoor lighting and parking, along with adding on secure vestibules that would provide locked entries with shatterproof film that would open directly into the school office so that visitors wouldn’t have to enter the school itself or walk through it.

A bond issue provides advantages over simply devoting the entire amount to operations and then taking some of it to fund facilities, Gaines noted.

Bond issues require interest to be paid on projects, but interest rates are at historic lows. He hopes that the 12-cent bond issue will eventually be replaced with a cyclical bond issue system like Mehlville had in place from the 1950s to 1992.

Mehlville is the only school district in St. Louis County that does not have any money devoted to facilities through the dedicated tax rate of a bond issue. The district has the second-lowest tax rate among 22 districts — only Ladue is lower, due to its high assessed valuation. That would not change due to the bond issue, since it will not change the overall tax rates.