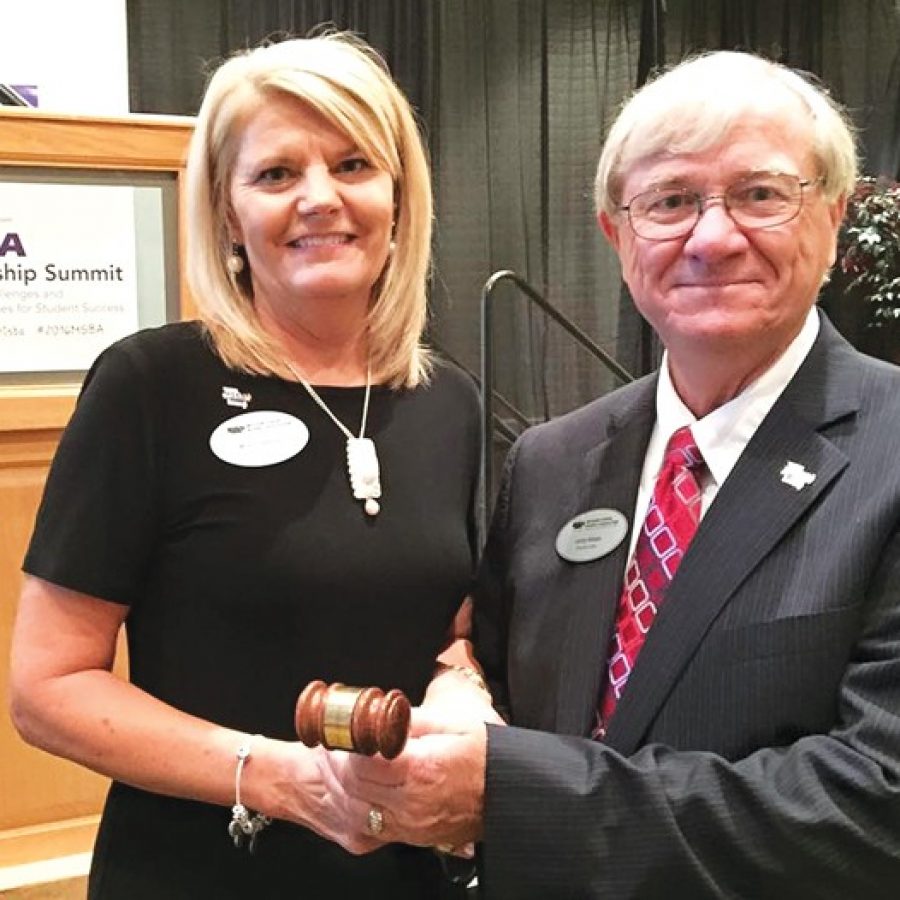 New Missouri School Boards' Association President Larry Felton, a member of the Mehlville Board of Education, accepts the gavel from past President Mona Coleman of Bolivar during the MSBA Leadership Summit at Tan-Tar-A in Lake of the Ozarks.

Mehlville Board of Education member Larry Felton recently took office as the new president of the Missouri School Boards’ Association, or MSBA, which also granted awards to several local school districts, including Lindbergh, Affton and Bayless.

Outgoing MSBA President Mona Coleman of Bolivar handed the gavel to Felton at the MSBA Leadership Summit at Tan-Tar-A in Lake of the Ozarks June 4. In his remarks at the summit, Felton said his priorities as president will be advocacy for public schools, improving the local presence for school boards, leadership development and continuous improvement, according to a news release.

The Bayless and Wright City boards were among five boards recognized for Teaching, Learning and Assessment.

Affton was one of three boards that won in the area of Climate, Culture and Organizational Efficacy.

It is the second year in a row that Affton has won the award, board President Tom Bellavia stated in a news release. Last year, the board was honored for Teaching, Learning and Assessment.

“Affton’s expectation of continuous improvement throughout the district is essential to our success,” Bellavia stated in the release. “However, it would not be possible to continue achieving at a high level without the passion and dedication of our school staff, district leadership and students.”

Affton Superintendent Steve Brotherton said in the release that the district “could not be more proud” of the school board, which dedicates “countless hours and unparalleled passion toward ensuring that we provide strong schools and programs for the Affton community.”

MSBA also honored the Lindbergh Board of Education as one of only 16 boards statewide to receive the 2016 Governance Team Award, which recognizes a commitment to regional and statewide leadership and ongoing board professional development. Bayless also received the honor.

Mehlville board Vice President Jean Pretto received her advanced board member certification at the Leadership Summit, which means that the Mehlville board could qualify next year as an Outstanding Board of Education.

Felton said at last week’s Mehlville board meeting that he hopes Mehlville applies for the honor next year in strategic planning and finance.

“We are all so proud of you, Larry,” Pretto told Felton at the June 9 Mehlville meeting.

Felton said he plans to take advantage of the MSBA presidency by showing off what Mehlville has to offer to the rest of the state. He’s enlisted a district orchestra to play at the MSBA annual conference in October and will hold a competition at the beginning of the school year to decide what artwork from Mehlville will hang all year in the MSBA offices.

“I have a great opportunity to show everybody what a great place we are,” Felton said.