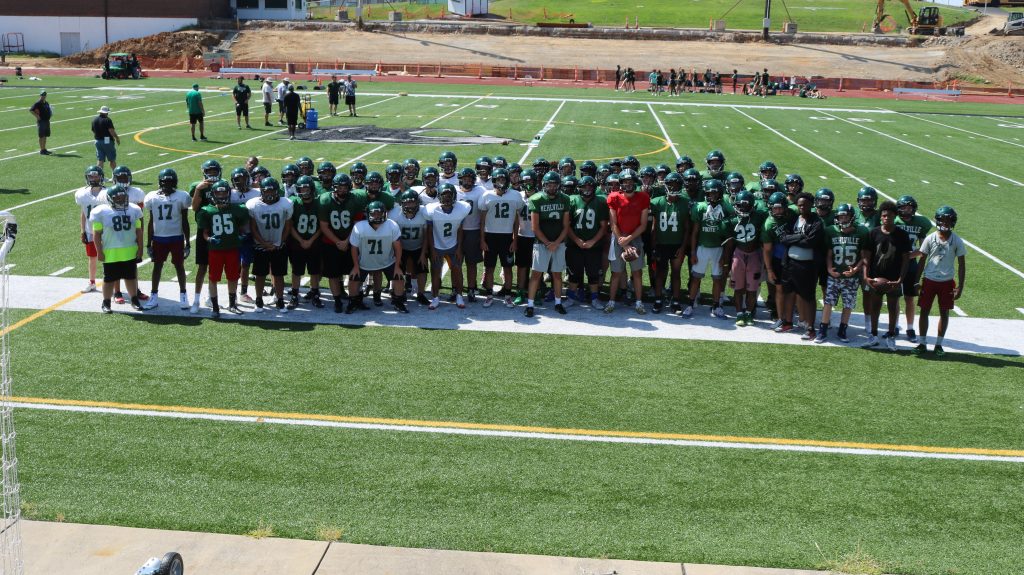 After going 7-3 overall and making it to the Missouri Class 5 regional game last season, the big question on everyone’s mind is how good will the 2019 Mehlville football team be?

“I’m pretty happy with the team so far,” Mehlville head coach Kent Heinemann said. “We’ve got a lot of guys coming back that have time on the varsity since their sophomore year. It was very apparent this summer that these guys haven’t dropped off much since last season.”

Leading the Panther offense this season is senior quarterback and defensive back Evan Robertson. In 2018 Robertson threw for 636 yards and 10 touchdowns with just four interceptions. He was also deadly on the ground game with 39 carries for 86 yards rushing and four touchdowns and a 91.126 quarterback rating.

“Evan’s looking pretty good,” Heinemann said. “He takes the field with a lot more maturity and confidence, and his arm strength has definitely improved.”

The Panthers will look to the trio of senior running backs Steven Haverstick, Will McCaine and Jacobi Shelton to pound opponents on a relentless ground attack.

As a junior, Haverstick carried the ball for 481 yards rushing and seven touchdowns.

“Steven is a physical back that’s just very athletic,” Heinemann said. “He’s a smart player that makes good decisions with the ball.”

McCain hammered the ground game for 383 yards rushing and five touchdowns while also hauling in 47 yards receiving and one touchdown.

“We’re blessed to have Will be a part of three really good running backs on this team,” Heinemann said. “He’s a very important part of our program and a big part of our success on the field.”

Shelton carried the ball 47 times for 263 yards rushing and two touchdowns while also racking up 47 yards receiving and one touchdown. At defensive back, Shelton notched 58 tackles and three interceptions.

Heinemann also likes the progress of senior linemen Mitchell Walters, Joey Brett and Harry Meyer: “Mitchell is a super hard worker and a big-time leader for us. Joey got the center spot last year, and he owned it and ran away with it. Harry also started midway through the season and is a guy that will get out there and grind for us.”

Senior wide receiver and defensive back Frankie Baez saw limited action on the field as a junior, but is stepping up.

Kicker Charlie Galentine returns for the 2019 campaign after nailing down two field goals and 35 extra points as a junior.