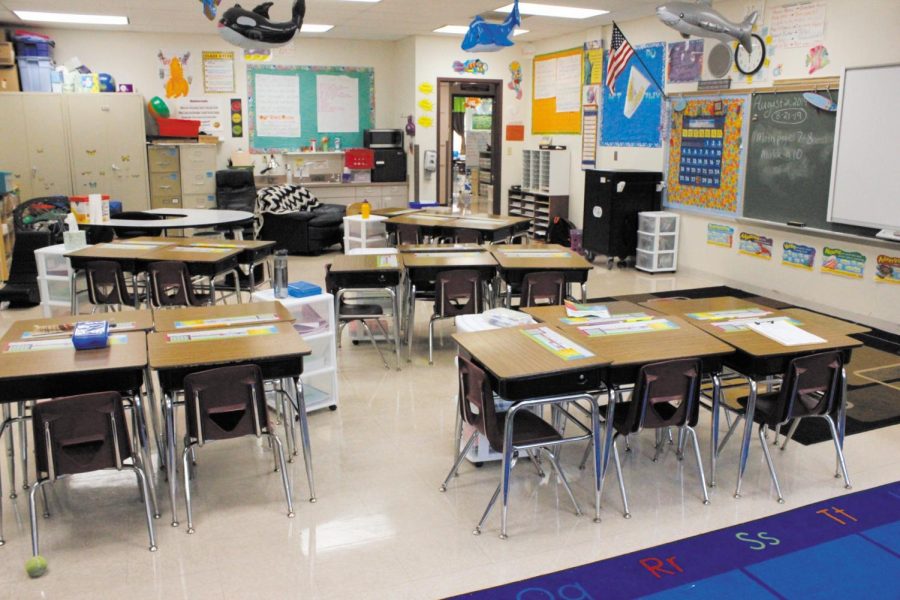 A classroom in Hagemann Elementary.

Mehlville School District facilities could be getting several upgrades, including security enhancements, if voters in the district pass Proposition S for “Safe Schools, Safe Kids” in the upcoming election next month.  Voters will consider whether to approve the $35 million, 12-cent no-tax-rate-increase bond issue Tuesday, April 6. Voters last passed a bond issue in 1992.

Bond issues require 57-percent voter approval and, if passed, the district will take 12 cents of the 45 cents currently being levied from 2000’s Proposition P tax-rate increase to fund $35 million in facilities improvements across the district.

The remaining 33 cents would move into the district’s operating fund. The district will continue to levy the entire 45 cents whether or not Prop S passes, but a bond issue allows the district to finish more projects at one time instead of over decades.

Over a quarter of the $35 million focuses on safety upgrades at $11.6 million, including secure entrance vestibules at every school, as well as shatterproof glass. The remainder of the bond is allocated toward $7.3 million in HVAC upgrades, $5.6 million in “other” projects listed on the website, $2.8 million in restrooms, $2.7 million for roofs, $1.9 million for handicapped accessibility, $900,000 in parking upgrades and $2.2 million in contingency funds.

“One of the challenges is that when a person walks into the front entryway, they have to take a left to go to the office,” said Trautwein Principal Shannon Henderson about the security vestibule, in a video released by the district highlighting the Prop S facility needs at each school. “It would bring some sense of relief … that the individuals entering the building would enter straight into the office, or would have a stopping point before they were able to have access to the building at large.”

Regarding the parking situation at Trautwein, while the parking lot for visitors and families is good, it’s “the staff parking that presents a lot of problems.”

“In my seven-year tenure here, we’ve had multiple accidents happen because the spaces are so tight. … There’s no place to turn around,” said Henderson. “It (Prop S) would give us real defined parking spaces and it would widen those spaces … and make it more usable.”

At Washington, the committee identified the need for a secure entry vestibule, outdoor lighting, roof work and Americans with Disability Act-compliant upgrades.

“If you’ve ever been to Washington Middle, you know that we have a lot of stairs. If a student is in a cast or if we have any kind of students in wheelchairs or adults, they have to go all the way around the building. There is no access to the front of the building,” Washington Middle School Principal Kelly Roberts said. “We’re going to hopefully be getting a re-up to the front of our building so that way it’s more welcoming, so that when you come to Washington, you don’t have to figure out ‘How am I going to get in here,’ it’s right there for you.”

The security entry would add “another layer of safety so we don’t have people accessing the building who should not be accessing it,” Roberts said.

Hagemann Elementary, 6401 Hagemann Road, will also get a secure entry vestibule if Prop S passes in April. As one of the newest schools in the district built in the 1990s, Hagemann will not have as many bathroom upgrades as other schools.

“When we have a visitor come here … they ring the bell and enter our front doors — there is about 15 to 20 feet before they get to the office and sometimes we’ll have visitors get confused. They’ll pass those doors up and they’ll end up in our commons area around the building,” said Hagemann Principal Julie Durham. “If Prop S passed, we would be fortunate enough to be able to secure our office and our building, even moreso because our visitors would actually enter the office before entering any part of our school.”

The Facilities Steering Committee that met for nearly two years with parents, residents and teachers from every school also identified Hagemann’s need for a handicapped-accessible playground compatible with the Americans with Disabilities Act as well as a second site entrance and exit.

With only one entrance in and out of the building’s parking lot, congestion is also an issue that Prop S could alleviate.

“We only have one entrance and exit and it creates a lot of congestion here and it causes a delay for our parents to get out of the parking lot, and it’s just not feasible,” Durham said. “With Prop S, we would get a second entrance and exit so we can have a better flow of traffic through our parking lot.”

The district hopes that the Prop S facility work is completed in three to four years, Superintendent Chris Gaines told The Call. Without a bond issue, the district would stretch those upgrades over many years.

Gaines said that he hoped that schools with sizable upgrades like Bierbaum Elementary could be finished by summer 2023.

“Weather is going to play a factor in that, but we’re hoping three (years) but maybe as much as four to get all the work done,” said Gaines.