Mehlville officials look to improve block scheduling, not eliminate it 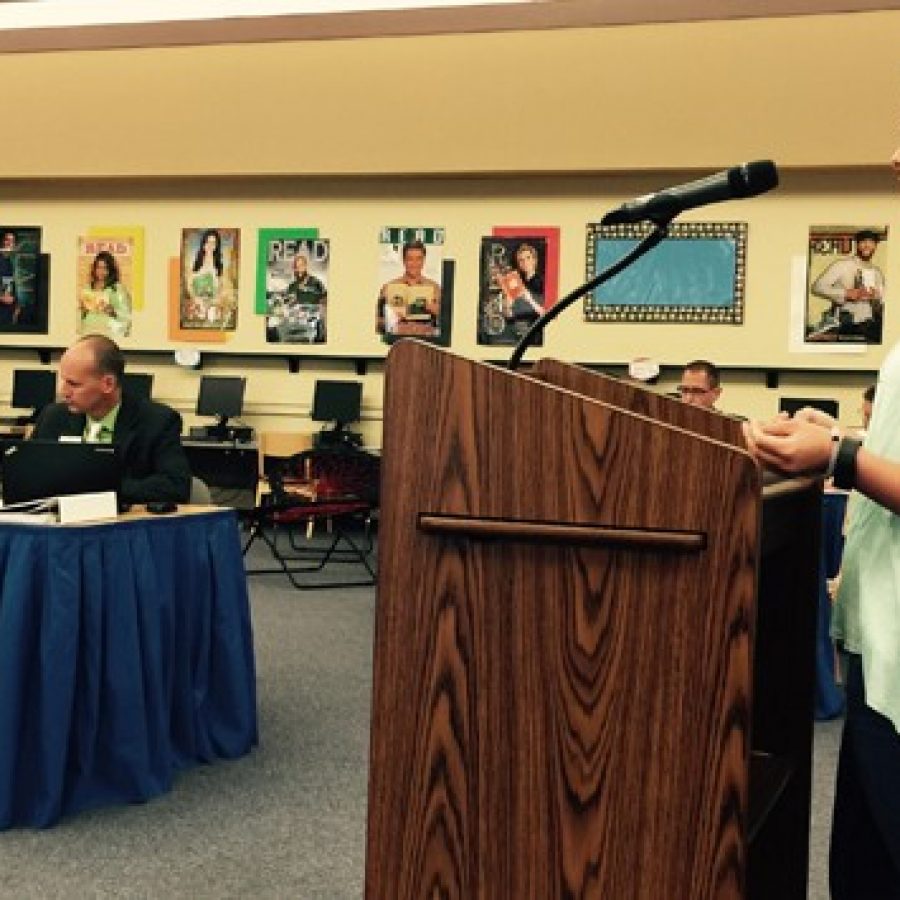 MHS senior Anna Herman tells the board that block scheduling is key to her academic success Aug. 11. Pictured to the left are board member Kevin Schartner and Superintendent Chris Gaines.

A committee of students, parents, teachers and administrators from Oakville and Mehlville high schools is set to consider changes to block scheduling, but Mehlville School District officials say they hope to improve the popular class structure rather than cut it altogether.

District officials say their investigation of block scheduling was spurred by suggestions from high school teachers and others on a December community savings survey that it is inefficient spending. But Superintendent Chris Gaines and Board of Education President Samantha Stormer also note that block scheduling has never been examined by the district for effectiveness since it began in 1997.

More than 60 residents and students attended an Aug. 11 presentation by a scheduling team, comprised of assistant principals from both high schools and Witzel Alternative Academy Director John DeWalle, to protest any move away from block scheduling.

Switching from block to the traditional seven-period school day could save close to $2 million annually, but proponents of block say it would come at the expense of student preparation and achievement — keystones of the district’s strategic plan.

Oakville High parent Stormer wrote on Facebook that as the mother of a high-school student and three younger children, she sees the review as an opportunity for improvement, not as a budget cut.

“I’m not just a board member when it comes to these decisions,” she said. “I would be truly disappointed if the district I sent my kids to didn’t continually look to improve.”

But at least one board member, Venki Palamand, is skeptical that a review prompted by a savings survey will not lead to teacher layoffs. Although the district could save money by going to a hybrid schedule — a combination of traditional and block — Palamand wrote in an exchange with Stormer on Facebook that he did not support possible teacher cuts.

“Just because it came from the cost savings survey doesn’t mean that we are going to cut anything, and it wouldn’t cut 30 teachers,” Stormer replied.

Rather than cut positions, the district might use those teachers to free up department chairs’ schedules so chairs can coach their fellow teachers and grow their expertise, rather than just teach classes. Another possibility could be to add interventionists at the elementary level, Gaines said.

Some board members, including Stormer, Jamey Murphy and Jean Pretto, said they are intrigued by hybrids. Board member Larry Felton and Secretary Lisa Dorsey were absent.

“I like the idea of a hybrid and a more customized learning environment for kids individually,” Stormer wrote. “Everyone knows kids don’t learn the same way. I’d love to see us come up with a way to implement both and the kids be able to customize it around their coursework.”

Several parents have sent emails to the board and Gaines saying that they believe the district promised to keep block scheduling if the district’s 49-cent tax-rate increase Proposition R passed last year.

Palamand asked the scheduling team if they discussed ways to keep the high school schedule “roughly similar” to block scheduling to “maintain the promise we made to the community.”

But the team wasn’t tasked with that, Deputy Superintendent Brian Lane said.

“That’s not their conversation to have,” Stormer said. “That would be us having that conversation.”

But block scheduling never appeared in any of the district’s official literature or Prop R promises, Gaines told the Call.

As to why Gaines decided to bring up the conversation about block scheduling now, in the wake of passage of Prop R, the superintendent referred to his State of the District address a year ago, in which he asked residents which way they wanted their school district to go — more budget cuts, or improving through the strategic plan.

Besides the scheduling team, several other teams of assistant principals are working on other areas for improvement, including redistricting and a high school innovation team, which is separate from the team working on a new elementary school of innovation. The high school team is set to present to the board when it meets at 6:30 p.m. today — Aug. 25 — in the Administration Building, 3120 Lemay Ferry Road.

To Gaines, it seems Mehlville hasn’t examined aspects of education like schedules since administrators are so busy doing the jobs of other positions that were cut over the years.

“Somebody said, ‘You’re the boss, you’ve got all the answers,’” Gaines said. “I said no, I’m just asking questions, and we’ll figure out the answers together. But if you don’t ask the question, it’s hard to get to a better place. And maybe we’re in the best place now, I don’t know but we’ll see. A lot of things have changed over 20 years.”

While he does not foresee a move back to traditional, Gaines said the committee will determine what’s best for students.

“If you’re spending a whole bunch of time and resources on something that’s not effective, then you shouldn’t continue to do that,” he said.

After a 12-day committee application period, the scheduling team will announce Aug. 31 which eight teachers, six parents and four students — two sophomores or juniors from each high school — will “basically join us in a conversation,” said team member and Mehlville Assistant Principal Jason Landherr.

Board member Kevin Schartner suggested that they enlist critics of a change to serve on the committee, because any plan that would convince them to make a change has to be a good one.

Gaines told the Call the next day, “You heard people talk last night — you think there’s going to be anyone applying who’s not a critic? I think it’s going to be harder to find people who aren’t.”