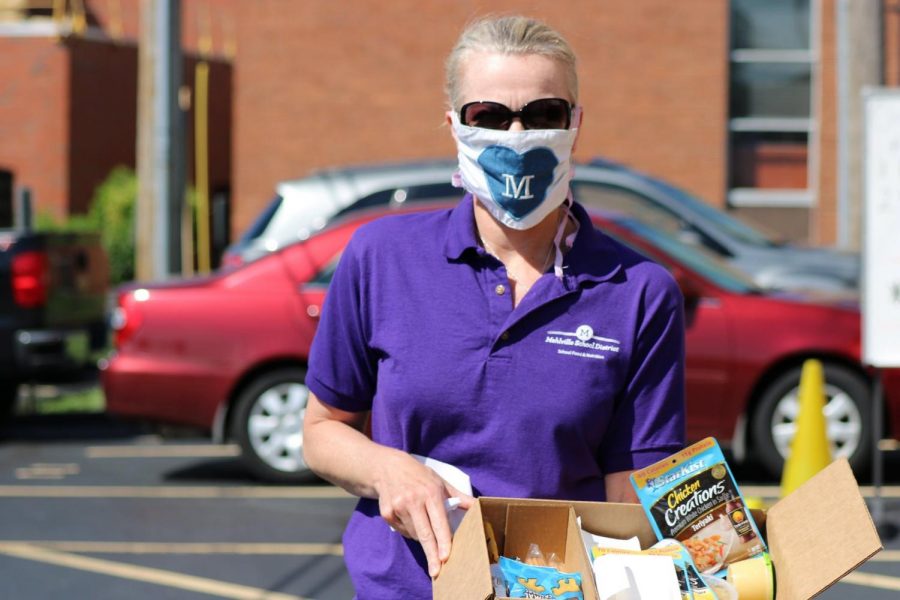 A Mehlville School District employee hands out emergency food boxes from Operation Food Search to students receiving grab-and-go meals while students are out of school during the pandemic.

The Mehlville Board of Education is holding an in-person meeting tonight to decide whether to start school this fall in person or all-virtual due to the COVID-19 pandemic.

The meeting will take place at 6:30 p.m. Wednesday, Aug. 5, at the William B. Nottelmann Auditorium at Mehlville High School, 3200 Lemay Ferry Road.

Seats will be sectioned off so that attendees can be socially distanced, and total attendance by members of the public will be limited to 50.

The meeting will also be livestreamed on the district’s YouTube channel at this link.

The board will consider an agenda that includes the plan for reopening, which the district has not yet announced, and a different calendar for the school year.

Unlike other districts that announced plans July 20, including many that have later changed their minds and gone to all-virtual, Mehlville said it would wait and see where the spike in coronavirus cases trended.

At the urging of health officials, most St. Louis County schools have already announced in the last week that they will begin the year online. Kirkwood was the first in the county to do so, while the Affton School District was the first in South County. Hancock Place School District, which had initially said that it would offer the option of either five days a week in-person or online learning to families, said Tuesday that the district would instead begin the year 100-percent remote. Bayless followed and its school board will also decide Wednesday night.

Most districts released initial plans July 20 and have since reversed course, although some districts like Lindbergh and Rockwood are still saying they will offer a blended in-person/virtual option for students, with two days face-to-face learning and three days virtual.