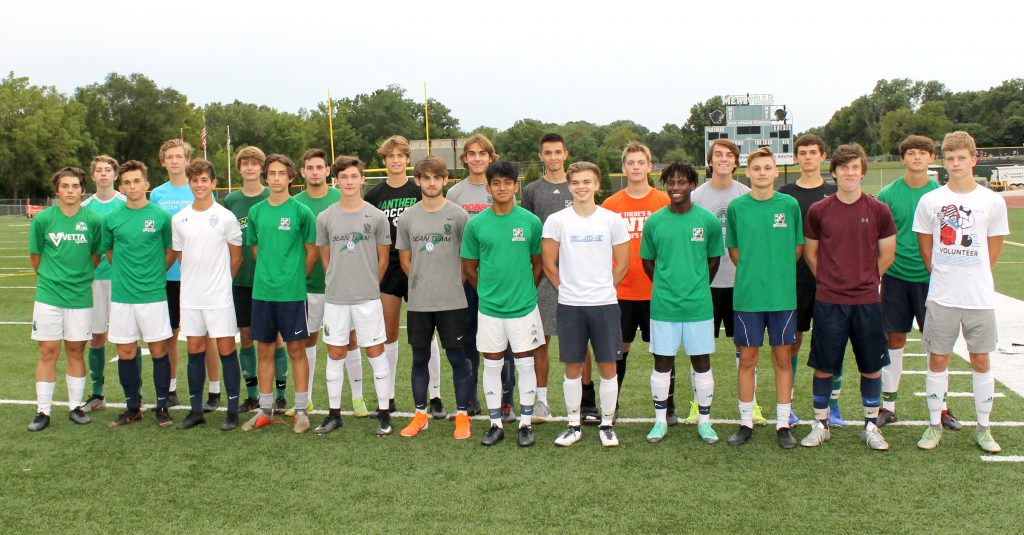 Mehlville High’s head boys soccer coach Tom Harper says his team’s roster includes ‘cogs in the offensive wheel’ and players who will battle it out all season on the field.

For the last four years, the Mehlville High School boys varsity soccer team has won a district championship, and this year’s group has the exact same goal in mind: Win districts and advance to the state playoffs.

This season is all about taking care of business for the Mehlville High School boys soccer team. The Panthers are look-ing to bounce back from last year’s 9-11 record, in which they lost to St. Louis University High 2-1 in the Missouri Class 4 District 4 semifinal game.

“We talk about last season and we look back at that and feel like we didn’t handle our business,” Panthers head coach Tom Harper said. “I tell everyone that we’re really young, but we’re young in terms of experience.”

When you glance at the Mehlville roster, you realize that they have an impressive 15 seniors. Harper is hoping that this year’s senior class gets the Panthers back to their winning ways with hard work and determination.

“We have a lot of seniors that train hard and these guys want to do well,” Harper said. “There’s a lot of intelligent kids on this year’s team that are very coachable and that’s exciting.”

In the backfield for the Panthers is senior centerback John Bullari. As a junior Bullari also provided a little bit of offensive firepower with two goals for four points.

“John is a dynamic leader for our team and a lot of the younger guys look to him for advice,” Harper said. “He has deceptive quickness and a knack for the game. He’s my chief on the field.”

Also in the backfield for Mehlville this season is senior Chris Hopwood at wingback.

“Chris is one of our guys that’s got a high game IQ and he understands what his role means to the team,” Harper said. “He’s a steady and consistent player from start to finish.”

Senior Kyle Becherer will roam the Panthers midfield at the center midfielder position after scoring one goal as a junior.

“Kyle is a steady player that’s not flashy because he doesn’t need to be,” Harper said. “He’s going to be the cog that makes our offensive wheel turn for us.”

Sophomore Dino Mahmutovic will also play at center midfield for Mehlville and should factor into the Panthers’ offense after scoring two goals in 2018.“Dino came up as a freshman and we knew there was something special about him,” Harper said. “He’s gotten bigger, faster and stronger in the offseason and he’s now playing with such an energy and pace that makes him ready for an outstanding sophomore season.”

Senior Ricky Sparks will see action at wing midfield and is a solid scoring threat for the Panthers after scoring three goals and making six assists as a junior.

“Ricky’s a kid that’s come back with a different view of the game, and we’re glad to see a smile on his face,” Harper said. “He’s got great speed, but has the ability to break opponents down because he reads the game so well.”

The competition for starting goalkeeper is heating up between senior Ian Brouk and sophomore Meldin Sabotic. Last season Brouk went 2-1 with an impressive 0.71 goals against average.

“Both of them are really good and are going to battle it out for the job,” Harper said. “Brouk was our No. 2 guy last year.”