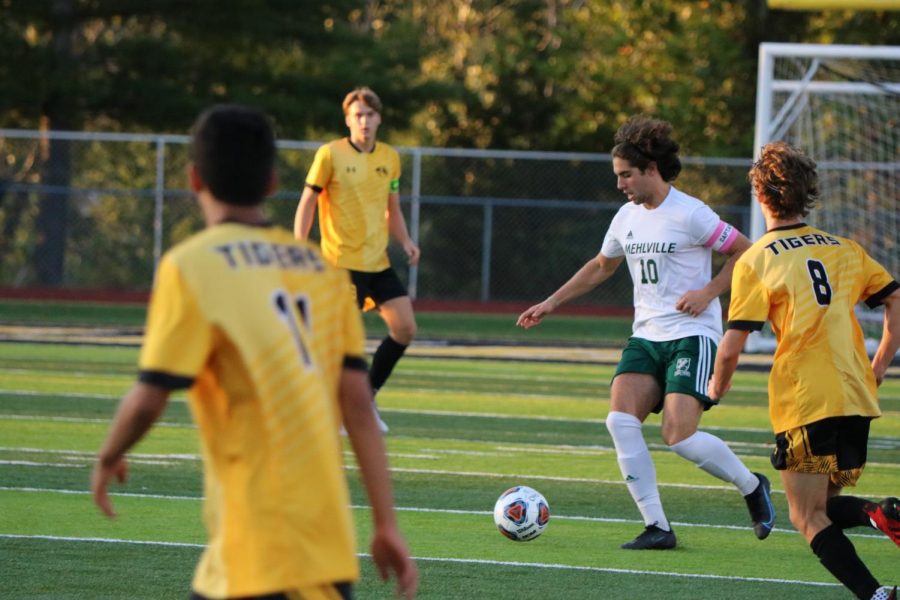 Mehlville senior striker Nico Cataranicchia was named to the Central All Region team in December.

After one of the most successful seasons in Mehlville High School soccer history, one player was named to the Central All Region team this month.

Senior striker Nico Catarinicchia received the honor in early December after a season in which he scored 20 goals and tallied 16 assists. As a team, the Panthers finished the regular season 18-2-1 and advanced to the state quarterfinals before falling 2-0 to Ladue Horton Watkins.

Catarinicchia said it felt good to be recognized after the hard work he put in over the years, and Coach Tom Harper agreed the recognition was a long time coming.

“When I think about a guy like Nico, it’s a culmination of where he started and where he was at the end of his high school career,” Harper said. “If anybody came and watched him practice, they’d know … he is one of those top 14 to 18 kids that’s deserving of that recognition.”

Out of Catarinicchia’s 20 total goals, five of them were game winners. Harper said the toughness of Mehlville’s schedule and the team’s “big game responses” helped legitimize Catarinicchia’s statistics among other candidates.

Catarinicchia joins 11 other senior Panthers who are graduating this year, two of which he said he linked up well with to create offensive opportunities.

“I had a lot of folks who helped me out so much. Anis Smajlovic, very talented player, he was my attacking mid, so we’d always link up as a duo,” Catarinicchia said. “I also had center defensive midfielder Dino Mahmutovic, he would always get up in the play. We would always link and it would be like a little trio … and it would just work so well against other teams.”

Both Mahmutovic and Smajlovic were named to the All State team with Catarinicchia and goalie Meldin Sabotic.

Catarinicchia also said the Mehlville coaches were “the most important part of the team,” since they knew how to use the players they had and when to lift up the team and players.

Harper said this class of seniors helped “put the program back on its feet” with the leadership and on field success they had. Catarinicchia was team captain for the Panthers this year and Harper said it was because of his and the other top players’ ability to create a welcoming atmosphere for younger players and to remain calm when the pressure was on (i.e. five game winning goals).

Catarinicchia has been playing soccer since he was four years old, but according to him he grew the most as a player while visiting Germany to play against teams in middle school. He said he isn’t sure what is next for him after high school, but he would “love to play soccer.”