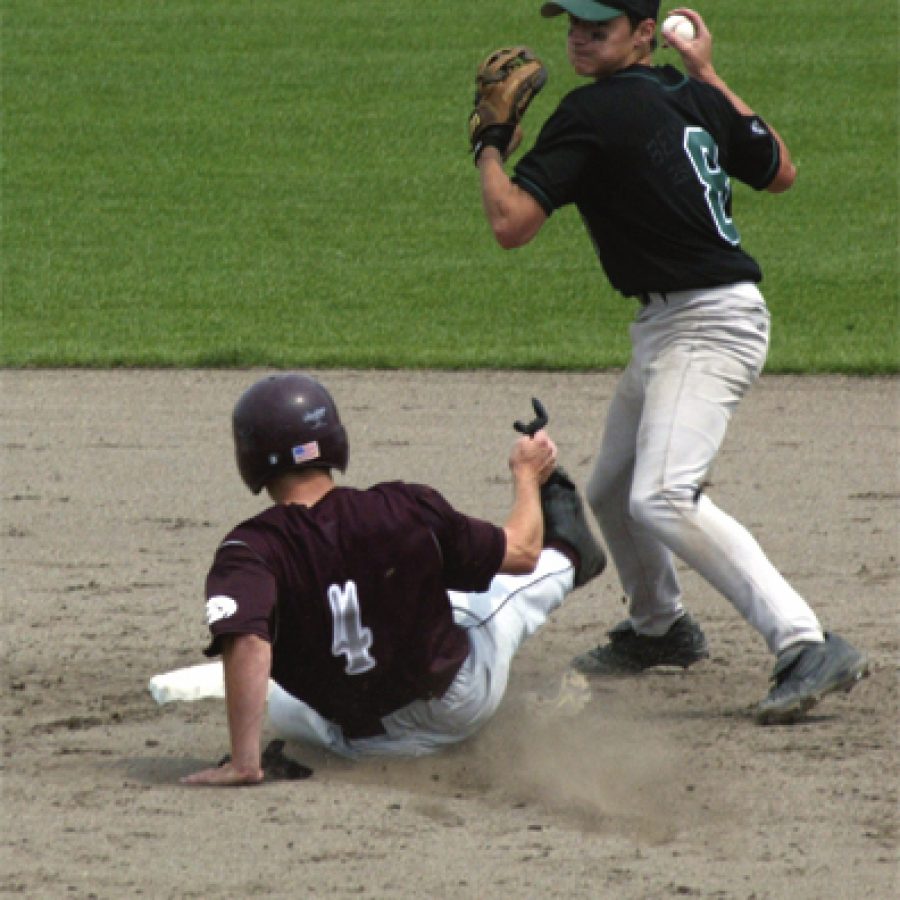 Mehlville High second baseman Josh Ruble, No. 8 in the top photograph, forces DeSmet's Greg Davenport at second base and then steps to the outside of the base path to relay a throw to first and complete one of three double plays turned in by the Panthers during Missouri semifinal baseball action in Columbia.

The Mehlville Senior High School baseball team’s dream for a state championship came to an end Friday when the Panthers came back from a 4-0 DeSmet lead in the top of the seventh inning to drop a heartbreaking 4-3 decision to the Spartans.

Panther head coach Jim Kern was pleased with the fact that his team (18-11, 3-4 Su-burban West) battled back in the seventh in-ning to give DeSmet quite a scare in the state championship’s semifinal game.

“We didn’t quit and we ended up scoring three runs in the seventh,” Kern told the Call. “We had the tying run on third and the go ahead run on second. We came back enough to scare everybody, we just were not able to finish it off.”

The Panthers’ rally in the seventh inning began when senior first baseman Tony Maus doubled to right field. Maus was an impressive 3-3 at the plate with one double.

“Tony’s a quality hitter that we want up at bat when things are on the line,” Kern said. “He really stepped it up when all the chips were on the table. He’s one of the big pieces for us to go this far.”

Mehlville junior Brian Hanewinkle pinch ran for Maus and was driven in along with sophomore outfielder Kevin Mahler on a double down the left field line by center fielder Steve Thurmond. The at-bat for Thurmond was his first since going down earlier in the season with a broken hand.

“This was Steve’s first at-bat in almost a month since he broke his hand,” Kern said. “When it was late in the game, we were not getting any hits and he and (senior pinch hitter) Kevin Karsh came through for us.”

The Panthers received their third run of the game when junior pinch runner Derek Hibdon scored from third base on a wild pitch.

Mehlville starting pitcher Jake Morgan took the loss as he gave up just four runs on 11 hits in six innings pitched. The senior hurler struck out four DeSmet batters in his fourth loss of the 2005 season. Morgan was 6-4 overall with a 1.81 earned-run average.

“Jake went out there and competed,” Kern said. “They (DeSmet) hit the ball well and they did a good job at hitting their spots. We didn’t get the bats going for Jake until the seventh inning.”

The following day, the Panthers faced Lee’s Summit in the third-place game, which turned out to be a hit parade as each team hammered out 10 hits each in a 12-6 loss for the Panthers.

Kern believes that the letdown from the loss to DeSmet may have had the Panthers down a bit despite scoring three runs in the first inning against Lee’s Summit.

Mehlville starting pitcher Mike Zeller took the loss as he gave up 10 runs on seven hits in just 41/3 innings pitched. Zeller walked six and struck out three in his third loss of the season. The junior starting pitcher finished the year with a record of 6-3 with a 3.38 earned-run average.

“I think that this was the biggest game that he’s been in for us,” Kern said. “He was too fine with his pitches and late in the game, they started waiting on his curve ball.”

Zeller was relieved in the fifth inning by junior reliever Derek Hibdon, who threw just two-thirds of an inning, giving up two runs on three hits.

“Derek was in a rough situation because it had been a while since he had last pitched,” Kern said. “He was a little rusty, but he went out there and did what we told him to do.”

Hibdon was relieved in the seventh in-ning by sophomore Kevin Mahler, who threw one inning of shutout ball for the Panthers. Mahler also was 2-4 at the plate with two runs scored.

“Kevin will see a lot more time on the mound next year,” Kern said. “He’s one of our top pitchers and outfielders and will have a very good career at Mehlville.”

Mehlville sophomore third baseman Tom Case was one of several Mehlville players to have a solid afternoon at the plate as he went 2-3 with three runs batted in and one stolen base.

“Tom had done a very good job at third base,” Kern said. “I think he has come around offensively and had done a good job when we’ve moved him around in the lineup.”

Senior shortstop Steve Braun also had a good afternoon at the plate with a 2-4 performance with one run batted in and one run scored.

“Steve’s someone that we will end up missing in his play on the field and his leadership,” Kern said. “He kept our team focused on what we wanted to accomplish after districts.”

Karsh extended his solid designated hitter performance against Lee’s Summit with a 2-4 showing with one run scored.

“Kevin’s a great kid and was our backup catcher this year,” Kern said. “In the third place game, him getting that bunt down (in the third inning) against Lee’s Summit put runners on all the bases and ended up being a big inning for us.”

Despite the two losses, the Panthers head coach believes that this year’s trip to the Final Four will be a learning experience for his young team. Mehlville graduates just four seniors — Steve Braun, Kevin Karsh, Tony Maus and Jake Morgan.

“I think it was a great learning experience for us,” Kern said. “Hopefully we’ll be able to build on that in the future. We played well, but when you have four good teams, someone has to get fourth place. I’m really proud of the kids in getting there. This was a big step for our program.”