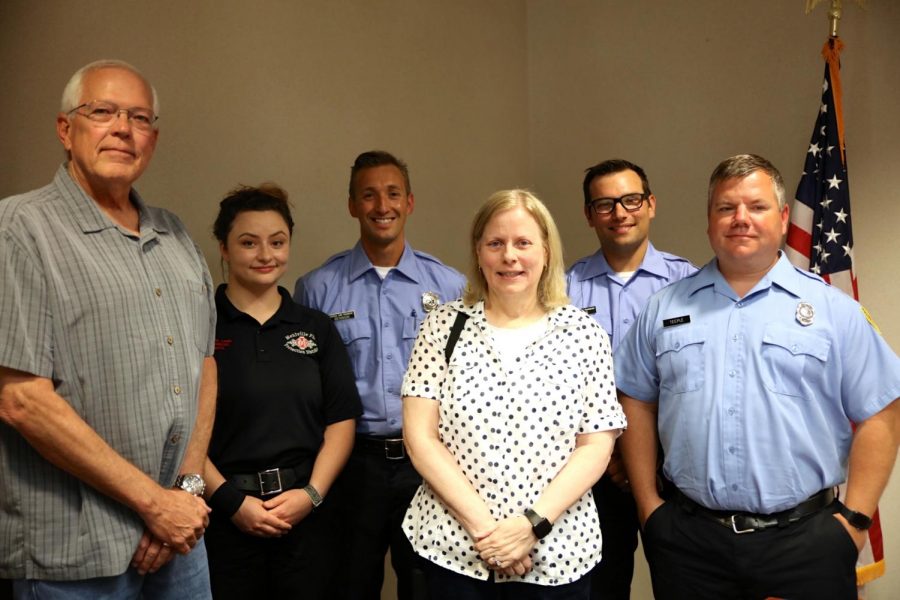 Several employees of the Mehlville Fire Protection District were recognized last month at a Board of Directors meeting for their efforts in helping to save the life of a fire district resident who went into cardiac arrest in April.

On April 7 at 5 p.m. Carol collapsed in her home while making dinner. Her husband, Greg Jacobsmeyer, quickly called 911 and was directed through a critical five minutes while emergency response teams drove to the residence.

Greg said the operator’s guidance was “precise and to the point,” and allowed him to perform CPR in those key moments.

“To all of you that make your crews as good as they are, I thank you,” Greg said.

Bennion and the other emergency personnel, including Appel, Lipina, Teeple, Ekiss and Smith arrived at the scene and began immediately administering first aid to Carol.

“We’ve been doing this long enough where we can tell when a patient is having a bad time, and we knew right off the bat that you (Carol) were in a bad situation,” Bennion said.

Bennion said Mehlville’s emergency response policy worked out well in this situation because paramedics were able to treat Carol right away with CPR, versus the more usual treatment on the way to the hospital.

Bennion said everyone on site had a role to do, starting with Ekiss. Ekiss was what Bennion described as the “quarterback of the team,” meaning he was watching a heart monitor, Carol and the rest of the team, all while making sure treatment was done correctly. Smith, Ekiss’ partner, was in charge of keeping Carol’s breathing in check during the operation.

The team took turns giving Carol CPR for eight minutes, while Bennion made sure each step was getting done along the way.

“As a team we all worked together, and that’s the only way we were going to get it done,” Bennion said.

He described Carol’s heart situation during first aid with a school metaphor. Her heart, the classroom in this case, was full of kids, her heart cells, “goofing off, throwing paper airplanes and hanging from the ceiling.”

“We as the teacher come in and we shock the whole heart, and it worked,” Bennion said.

But after the shock they weren’t “out of the woods yet.” Carol’s heart began beating too fast, forcing the EMS team to shift their mindset from cardiac arrest to an unstable heart rate.

“This time the whole classroom is behaving except for one kid. This time we just have to smack the one kid,” Bennion said. “It worked and (Carol) converted to a normal heart rhythm.”

The team then rushed Carol to the hospital, where she would spend the next three weeks. Bennion said it’s uncommon in a case like Carol’s for the patient to recover or even survive. Carol said the hospital staff would refer to her as the “miracle patient.”

“We are not the heroes. We are trained and paid professionals and we are really good at what we do,” Bennion said. “The one hero in this room is (Greg Jacobsmeyer), he’s the one that saved your life.”