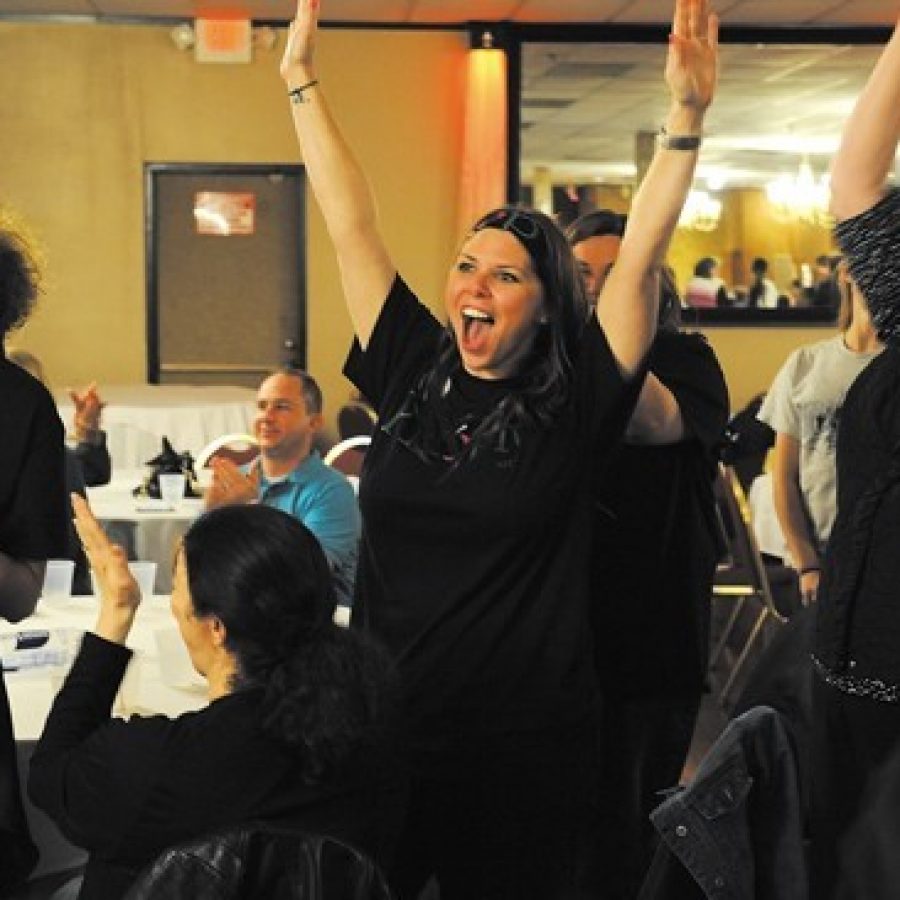 Mehlville School District residents celebrate the historic passage of Proposition R at a victory party at Andre's South in 2015. The district may seek to place another bond issue on the ballot this November.

Even before the Mehlville School District has received any funds from Proposition R, the district’s Finance Committee is taking the first steps to track where the new funding goes.

The committee set a baseline last month to measure the new money the district promises to spend under Prop R, a 49-cent tax-rate increase that 72.5 percent of voters passed Nov. 3. Along with new spending on reading coaches and facilities, the district pledges to reverse $4 million in budget cuts that slashed tutors, teachers and student clubs for the 2015-2016 school year.

As the district’s spending ramps up with the new commitments next year, the volunteer Finance Committee, made up of district residents who are financial professionals, will serve as the oversight committee to examine where the $8.3 million in annual Prop R funds is going.

“This is the most excited I’ve been about the district in 30 years,” committee member Marlene DeNoyer said as the panel met Feb. 16.

In their first major judgment call on how to track Prop R spending, committee members resolved how to measure the salaries of the 16 new reading and English-language learner, or ELL, coaches, who the district hopes will improve academics for struggling learners.

The district has already filled most of the new coaching positions by hiring veteran teachers from inside the district, who were already receiving salaries from Mehlville.

But in a unanimous decision, the Finance Committee said it is easier for the public to understand and measure where Prop R is spent by looking at the salaries of the teachers who are actually in the jobs, rather than the new money that will be spent to hire their lower-paid replacements.

Trying to explain to the public the difference between the overall increase in salaries versus the money spent on salaries for the actual Prop R coaches is “too convoluted,” said committee member Jennifer Younce, who is a certified public accountant, or CPA, for the Windsor School District.

Calculating the actual coaching salaries could equate to a higher number than originally projected since the district didn’t plan on hiring veteran teachers, however, Gaines noted.

Finance Committee members, including Board of Education liaison and President Venki Palamand, believe the most direct way of measuring is the better way, and the public will likewise appreciate that veteran teachers were hired.

Coming in below the Prop R estimate by calculating just the new money spent on salaries would not be as transparent, however, he added.

“That looks bad — that looks like you’re shuffling money someplace else,” Palamand said.

Under Prop R, the district’s professional development spending will increase to $1.1 million, 11 times the current spending, the state minimum of $100,000, which is entirely funded by federal grants. Other plans include $550,000 for technology and the 1:1 laptop program, $1.2 million for textbooks and instructional materials, $200,000 for clubs and $50,000 to restore full school supply budgets.

Facilities spending to increase by $1.75 million

As approved by Prop R voters, the district will spend an additional $1.75 million on facilities over this year’s $500,000 baseline, not counting the roughly $600,000 in dedicated roof maintenance the district would gain if voters approve the April 5 ballot measure Proposition A for AC, a 4-cent no-tax-rate-increase tax transfer.

Gaines said in his State of the District address last year that Mehlville has $55 million in unfunded facilities needs and maintenance. With the increased facilities spending under Prop R and especially if voters pass Prop A next month, the district can begin to address that long list of needs, he said.

“As we’ve gotten closer, we’ve pretty much set a hard number and we’re good to go  we’re good to go with the stuff the Facilities Committee laid out,” Gaines told the Finance Committee. “If voters pass Prop A, we’ll be able to move some of that stuff forward because we can move some of the roof stuff around, and we’ll be able to really, really make some headway there.”

Although the district will not receive funds from Prop R until December and January, the board has to plan much of the spending sketched out in the Facilities Committee’s rolling five-year plan right now, since next year’s work will be done this summer.

Last week, the school board unanimously approved the lowest qualified bid from Schaefer Electric for $434,445 in new fire alarms at Bierbaum Elementary and Oakville and Washington middle schools. According to a district memo, the schools’ current fire alarms are a hodgepodge from different manufacturers, costly to maintain and “well beyond the life expectancy of a fire alarm system.”

Under Prop R, Mehlville pledged to buy five buses a year  Chief Financial Officer Marshall Crutcher’s recommended rate of replacement just to break even on replacing the aging fleet. The first year, however, the district pledged to buy 10 new buses since it didn’t buy any this year.

“We have not been disciplined and we have not done what we should over the years, so you’ve got a logjam of old buses,” Crutcher said.

Instead of settling for 10, however, Palamand suggested board members buy all 15 buses they promised to buy in the first two years of Prop R right now, which would save 3 percent on the purchase price for all 15 buses and avoid an annual 6-percent hike in bus prices.

“Do we want to do two years of Prop R promises immediately?” Palamand asked. “We made these promises to the public.”

When Crutcher noted that the district didn’t have any money set aside for five more buses, Palamand said the district has $600,000 budgeted for buses the following year under the Prop R plan.

“We have a plan, and I think we need to make sure that we’re not just going off the cuff on things without properly analyzing,” board member Jamey Murphy said. “If we spend a little more money this year, what are we going to decrease in our budget to make up for that gap?”