Mehlville Board of Education votes on possible bond issue tonight 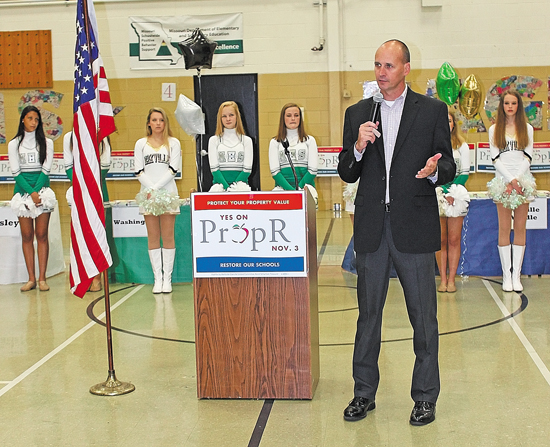 Pictured above, Superintendent Chris Gaines asks supporters at a 2015 rally for Prop R to help him get out the vote so that he can hire reading coaches and keep experienced teachers in the district. Behind him are the Mehlville High School Pantherettes and the Oakville High School Golden Girls.

The Mehlville Board of Education will vote tonight — Thursday, Aug. 20 — whether to place a 12-cent no-tax-rate-increase bond issue on the ballot for the Nov. 3 election.

The Board of Education will consider Superintendent Chris Gaines’ recommendation for a no-tax-rate-increase ballot measure for the upcoming election in November, following the conclusion of an 18-months facilities study around the Mehlville School District.

The board meets at 6:30 p.m. at the Mehlville High School Library, 3200 Lemay Ferry Road. Due to social distancing protocols and the COVID-19 pandemic, attendance at the meeting will be limited and face coverings will be required. The meeting will be livestreamed on the district’s Youtube page at youtube.com/c/MehvilleSchools/featured. The agenda can be viewed here.

The ballot measure will transfer 12 cents of the 45 cents being levied from 2000’s Proposition P to fund a $35 million bond issue, while the remaining 33 cents may be used toward operations.

In January 2019, a Facilities Steering Committee composed of nearly 40 parents, teachers and community members began touring 18 of the district’s 19 buildings over the course of 18 months, using their experiences in the schools and surveys from teachers, parents and students from each school to ultimately prioritize future facility needs for the district.

The committee ultimately identified over $237 million worth of projects. but Gaines said that some of those projects were “wants” rather than needs.

In June, the committee narrowed its priorities down to just under $40 million in projects, the bulk of which center around safety upgrades.

With the previously scheduled projects under Prop R, Prop A and the 410 fund, nearly $35 million was left in identified needs, equating to a 12-cent bond issue that would require four-sevenths voter approval.

Since the 1950s, the district used cyclical bonds every year to every other year to cover facility investments. The last cyclical bond was in 1992; others failed to pass in 1995, 1999 and twice in 1998.