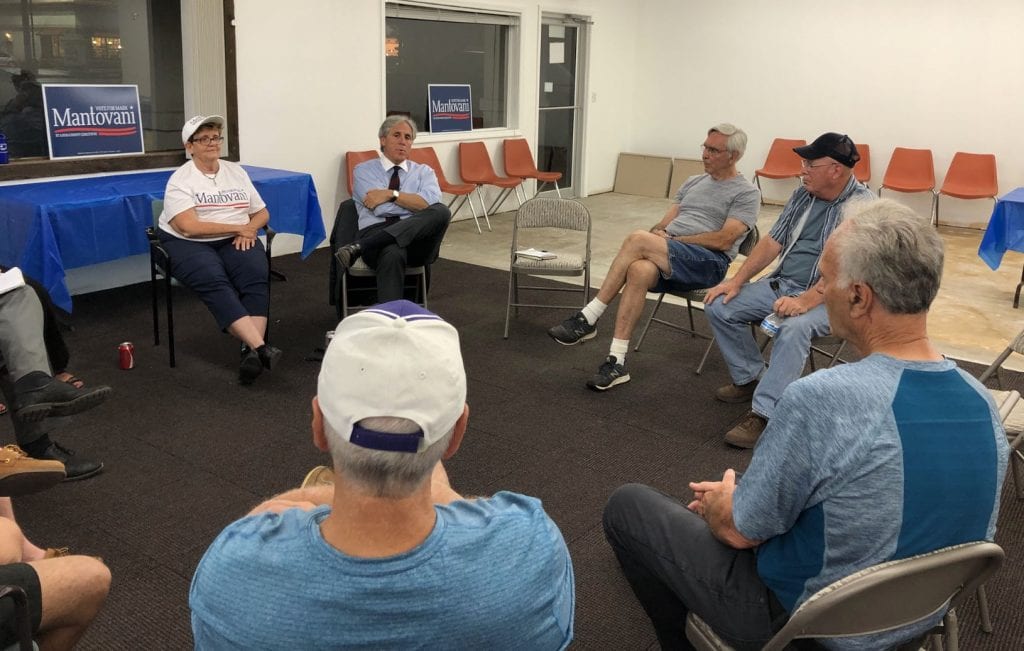 Democratic candidate for county executive Mark Mantovani believes that if south county residents want to solve an array of problems they see in government at all levels, from wasted tax credits for redevelopment at the state level to the broader issue of money in politics, electing him as county executive will begin to fix those issues.

He made that case June 28 at his south county office to a group of supporters who are unhappy with the way things are going on multiple fronts, including the county.

The Ladue businessman, 63, is the former CEO of a technology company.

As residents at his south county meeting listed their grievances with governments in Jefferson City and nearer to home, he said one of the reasons government strikes bad deals for taxpayers is that not enough business-minded people run for office.

“I think that has to do with the fact that a lot of people in government have never made a business deal in their life until they got in government,” Mantovani said of failed state tax credits for redevelopment.

“They don’t know what a good deal is or a bad deal is.”

Many people go into public service for the right reasons, he said. But then there are “crooks, there’s all different kinds — which brings us to the county executive,” Mantovani said to laughter from the group. “You don’t have to go all the way to Jeff City to find that.”

In remarks Stenger made to his own group of supporters days earlier at the Tesson Ferry Democrats, Stenger didn’t mention Mantovani’s name.

At Mantovani’s own meeting, he repeatedly turned the subject to Stenger and allegations of “pay to play,” alluding several times to the contract for a new North County Government Center at the former Northwest Plaza mall, which the County Council has requested that federal and state authorities investigate.

In Mantovani’s television ad released the same day as the meeting, he hits on Stenger for that alleged “pay to play,” showcasing a vending machine with Stenger’s likeness and buttons to push for political appointments, a “sweet land deal” and no-bid contracts.

One of Mantovani’s key campaign platforms is that he hopes to spur greater regional cooperation on issues like economic development, which he sees as the key reason that St. Louis is lagging behind trendier cities like Nashville, Tennessee. Things were different when he was growing up, he often says on the campaign trail.

“For my whole life, St. Louis hasn’t created any economic growth to speak of,” Mantovani said at the south county meeting.

“I do think we have to work together better than we have,” Mantovani added. “Most economic decisions in America today are made on a regional basis.

“When the NFL leaves or when Amazon picks a place for its headquarters, they’re not making those decisions based on south county or on Chesterfield, they’re making it based on how the whole region does.

“Regional decisions are how things get decided today, and we are out of step because we don’t have a regional strategy.”

Mantovani noted that when he was growing up in Affton, the city had 650,000 people compared to 300,000 today, and was ranked the 10th-biggest city in the United States compared to 61st today.

But to Mantovani, that greater regional cooperation does not mean that he is for a city-county merger.

He turns the question around to allege that Stenger is conspiring with Republican mega-donor Rex Sinquefield to try to get a “UniGov” government completely combining St. Louis County and city.

Stenger has denied that he favors a city-county merger, but said he is interested in what cost savings can be found by a Better Together task force studying that issue right now.

“Rex Sinquefield and, I believe, Steve Stenger want to create a UniGov over the whole thing, they want to have one government for the city and county controlling the whole thing,” Mantovani said.

“That’s crazy and can’t happen, but Rex Sinquefield wants to eliminate the city earnings tax and that’s a way to make that happen. And Stenger won’t speak out against him because he’s got his hand in Sinquefield’s pocket, and so that’s what I believe their plan is.”

Mantovani prefers a plan that would see the city of St. Louis entering the county as a municipality like its roughly 89 other cities, with representation on the County Council. With that plan, the county won’t be on the hook for any of the city’s debts, he said.

Only two large cities in the United States aren’t part of a larger county, St. Louis and Baltimore, he noted.

“We’ve all been led to believe that if the city comes in St. Louis County, we’d have to pay their bills — we don’t. We don’t have to pay anyone’s bills. That’s just a lie.

In Mantovani’s favorite example of that lack of cooperation, he cites the Major League Soccer team that Nashville got instead of St. Louis after city voters rejected public funding for a professional soccer stadium that would have been located downtown.

The county — and Stenger — sidestepped contributing money to that initiative, which sealed its fate, Mantovani said.

“And the consequence of that is that people of the entire region lost,” Mantovani said. “Nashville’s got our team… That’s an example of how we in this region lose by virtue of not working together. No cooperation.”