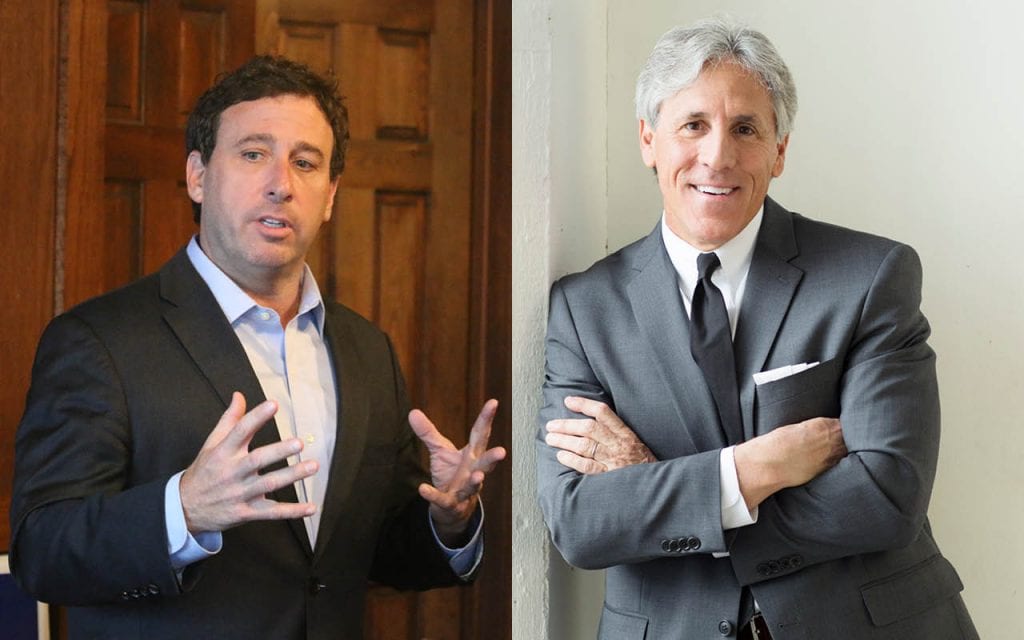 Voters will weigh in next week on what they want to see in the St. Louis County executive’s office, with County Executive Steve Stenger and challenger Mark Mantovani offering contrasting visions for what county government could look like in the next four years.

Incumbent Stenger, 46, said he is a master at getting things done for residents, while Ladue businessman Mantovani, 64, asks voters to “imagine the possibilities” of harmonious regional cooperation with him at the helm — including St. Louis city re-entering the county.

Stenger says he’s accomplished in a single term what other county executives might have been able to do in two. Among the accomplishments he lists: Maintaining the county’s AAA bond rating; saving $300 million on future pension costs; fortifying the St. Louis County Police Department with Proposition P; making budget cuts that he says will save $30 million over 10 years; and creating $5.7 billion of economic development and 30,000 jobs created or retained, while addressing enough aspects of the Ferguson unrest to fill up an 11-page report.

He’s done all that despite a County Council that has often sought to stop him at any cost, including lawsuits.

“I think our accomplishments have grown since we had that tension on the council,” Stenger said. “So if you ask, ‘Why should he be county executive?’ Look at the results. I think the results speak for themselves.”

Mantovani, who has put up more than $1.2 million of his own money into his race and raised another million from other donors to counter the $4 million in Stenger’s campaign fund, claims that Stenger has no vision and is corrupt and buried in “pay to play” politics, as seen in the county’s lease at Northwest Plaza and elsewhere. One of his commercials shows a Stenger-branded vending machine — insert money, get a contract, a land deal or another plum perk.

“I don’t have vision?” Stenger said. “He has no solutions for anything. Vision? The only vision he has is of trying to buy his way into the county executive’s slot — that’s his vision for St. Louis County. That’s all he wants. He has no vision whatsoever, and if he thinks that the people of St. Louis County are going to share his vision of bringing the city into the county, he’s sadly mistaken. That’s not a vision that the people of St. Louis County want. It’s just not. So not only is he dreaming, he’s dreaming the wrong dream. All he does basically is recite stats and has no plan for anything.”

The county executive has also shirked relations with county employees, Mantovani claims. One of them slipped the candidate a note in a restaurant that read, “Help us”  — a missive Mantovani likened to a ransom note.

It’s just one more indication that Stenger’s leadership has failed on every level, Mantovani said.

“In four years, he was missing in action,” Mantovani said. “He’s been missing in action in Ferguson. We couldn’t make the final 20 in Amazon. Our population is declining. The County Council has asked for a criminal investigation. He doesn’t show up for meetings anymore. I don’t know what else you could do to fail. It makes me sad for our community that that’s the kind of leadership we have. I’m a guy who would show up.”

Under Mantovani’s plan, the city would re-enter the county, which he believes would not be on the hook for the city’s pension debts, or any debts, just as it doesn’t pay for that debt in Florissant.

“Every city you can think of is in the county. This is not revolutionary stuff,” Mantovani said. “What’s odd is that the city isn’t in a county, and the consequence of this is that we don’t plan as a region.”

But Stenger said that he is against any form of merger, including the city re-entering the county.

“This is another one of these lies,” Stenger said of the idea that he secretly supports a city-county merger. “While we have a balanced budget, we don’t have the kind of money to afford the city’s issues. So under his proposal, we would probably go bankrupt as a county. It’s very reckless. And if you look at south county, I don’t think that south county wants that.”

As for Northwest Plaza and other contracts, Stenger said a series of investigations by the County Council have come up with little to show for it. Despite calls for federal and state investigations, he said that none are happening.

“Look at all the (council) investigations we’ve had in the last year. What’s been found? Nothing,” Stenger said. “And it’s because there’s nothing there. We run a really tight ship, and we run it light.”

Stenger claims that Mantovani is actually a Republican, as seen by the $20,000 he donated to former Gov. Eric Greitens.

“I mean, come on, it’s almost a joke,” Stenger said of Mantovani running as a Democrat.

But Mantovani said he voted and gave money to Hillary Clinton and regrets supporting Greitens.

He said he’s heard stories of Stenger literally telling developers that their projects will be approved if they donate money to his campaign.

“I don’t think there are any facts to support that anywhere that I’ve ever said that to anyone,” Stenger said. “I certainly haven’t.”

And it’s the other way around, Stenger said: It’s Mantovani that’s engaged in pay to play. He moved his marketing business Ansira Marketing from the county to St. Louis city for $1.8 million in tax-increment financing, or TIF, while he made $10,000 in campaign donations to city politicians. The money eventually went directly to his pocket when Mantovani sold the business, unlike Stenger’s campaign donations, Stenger said.

“It’s the same thing he’s accusing me of, but in my case, I’m not ingratiated in any way personally by those contributions,” Stenger said.

Mantovani said he only walked away with about $40,000 from the deal with his 15-percent ownership stake and that everyone benefited from a revitalization of a blighted area of the city.

“If they can make that a bad thing, God bless ‘em,” Mantovani said. “This was a win-win-win for everybody: The business succeeded, the community revitalized the neighborhood, our employees came to love it. Everybody profited from this deal.”

The former CEO promises not to fundraise at all for the first three years he’s in office so that he can focus on serving as county executive. And when he does start taking donations, he said he would not take any from developers.