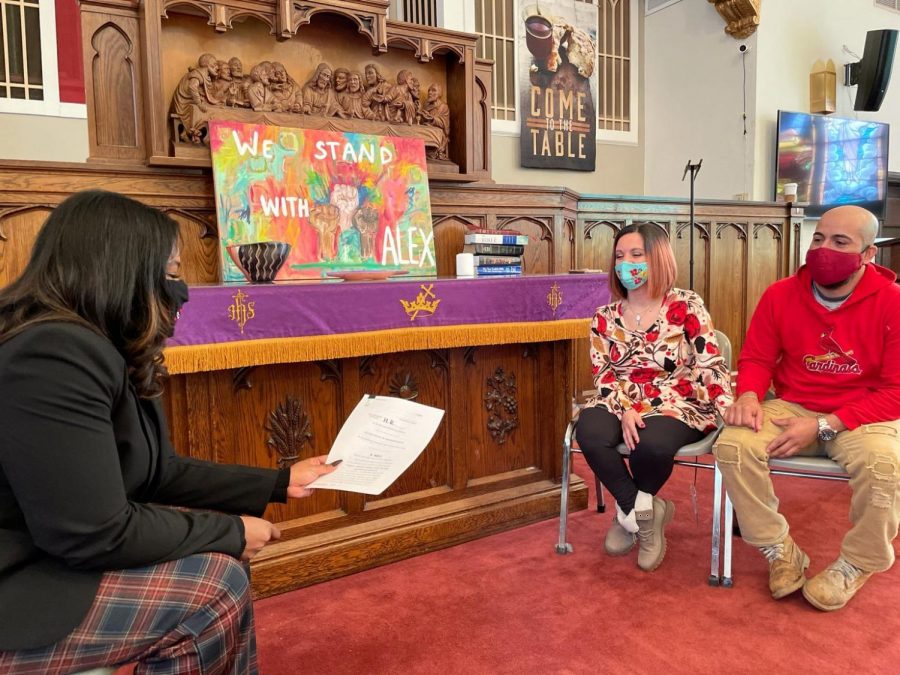 Alex Garcia, right, and his wife, Carly, meet with U.S. Rep. Cori Bush, left, at the church in Maplewood where he lived last week. She gave the Garcias a copy of her private bill to give him permanent residency in the U.S.

Alex Garcia, an undocumented immigrant from Honduras who has been living in a Maplewood church for more than three-and-a-half years to avoid deportation, left the church at 3 p.m. Wednesday after federal authorities committed to not enforcing his deportation.

Garcia is no longer a priority for deportation for Immigration and Customs Enforcement or ICE, the St. Louis Inter-Faith Committee on Latin America announced Wednesday. The agency has “unequivocally stated that it will not be pursuing Alex’s detention or removal,” the IFCLA said.

Garcia, from Poplar Bluff, has been living at Christ Church United Church of Christ, 2200 Bellevue Ave., Maplewood. Supporters were planning to gather with masks and social distancing at 3 p.m. as the Garcia family leaves the church.

“Today, Alex will claim his freedom and walk out the doors of Christ Church United Church of Christ in Maplewood, Missouri, no longer in need of the protection of sanctuary,” the IFCLA said.

Garcia is one of at least 42 people who sought sanctuary inside a church to avoid deportation during the Trump administration. ICE has guidelines discouraging agents from enforcing immigration law at schools, hospitals and churches. Christ Church UCC is the only Missouri church serving as a sanctuary against immigration enforcement.

Garcia said in a statement, “Today, we celebrate as I leave sanctuary and reunite with my family after being separated for 1,252 days. Because of all of your support and the new administration, Immigration and Customs Enforcement made a promise that I am no longer a priority for deportation. We are not done yet. There is still so much work that has to be done and I look forward to being able to join you all out there in the community and continue to fight for my permanent protection.”

Rene Alexander “Alex” Garcia Maldonado has been living in sanctuary at the church in St. Louis County since Sept. 21, 2017, after ICE revoked its previous decision to allow him to stay in the country. Garcia was given two weeks to turn himself in to be deported. That would have meant permanent separation from his family: Carly, his wife of more than 10 years, and five children,  all U.S. citizens.  Since then, Garcia’s legal team “pursued all avenues for immediate and long-term relief,” the IFCLA said.

Bush said, “St. Louis and I are so grateful and relieved that Alex has been reunited with his family at home. This is the power of organizing. Alex was able to go home today because of the tireless work of his family, organizers, faith leaders, lawyers, Christ Church UCC in Maplewood, and community members who fought tooth and nail for years to make this day a reality. The pain Alex and his family have endured is unimaginable, unjust, and unacceptable. ICE has promised not to deport Alex, and we will stop at nothing to ensure that they keep their promise. In Congress, I will continue championing the private bill to grant Alex permanent residency, which is the surest way to guarantee permanent unity for his family.”

Nicole Cortés, Alex’s attorney and co-director of the Migrant and Immigrant Community Action (MICA) Project, shared these remarks: “Today represents a huge milestone for the Garcia Family.  We will continue to fight on multiple fronts for Alex’s long term protection.  Today we celebrate; tomorrow we continue the work.”

Javad Khazaeli, Alex’s attorney and former ICE prosecutor, said: “Elections have consequences. It is encouraging to see ICE return to more humane and priority based enforcement. I am encouraged by the steps the President and progressive leaders like Rep. Bush have taken to move us toward an immigration system that works.”

Carly Garcia, Alex’s wife, said: “These last 3.5 years have been very difficult and traumatizing for us. But as you have heard from Alex. Today Alex will be leaving sanctuary because ICE made a promise that Alex will not be deported, that he is no longer a priority for deportation. We celebrate this win today but it’s not over; Alex still needs permanent protection. The private bill HR 1209 that Congresswoman Cori Bush introduced on Monday will grant Alex the protection he desperately needs — that we as a family desperately need. Thank you all so much for your continued support and we look forward to continuing to push for more just immigration laws so that all of the families in sanctuary are free.”

Rev. Rebecca Turner, pastor of Christ Church United Church of Christ, said in a statement: “The hearts of all of us at Christ Church are overflowing today. God has answered our prayers for Alex Garcia to live freely, without the threat of being separated from his family. Alex is a part of our church family and we will continue to advocate for him until he has a pathway to full citizenship.”

Sara John, Garcia’s organizer and executive director of the St. Louis Inter-Faith Committee on Latin America, remarked: “We are thrilled that these changes to enforcement priorities have meant that many people in sanctuary like Alex feel safe enough to walk free. We also know that Alex and millions of families like his are still fighting for permanent solutions and the ability to live united with their families. We will continue to work alongside them to secure humane legislative reforms that honor the dignity of all people, prioritize family unity, and end the criminalization of all immigrants and communities of color.”