Southside Pawn and Jewelry as seen on Google Maps, next to Sharpshooters Grill.

A Valley Park man faces federal charges for stealing guns from an Affton gun store after he tried to sell them on social media.

Devante Coffie, 19, of Valley Park, Missouri, was charged in federal court Wednesday with stealing 32 handguns and two long guns at the Southside Pawn Shop on Gravois Road in Affton.

Investigators say Coffie was caught because he tried to sell the guns on social media. 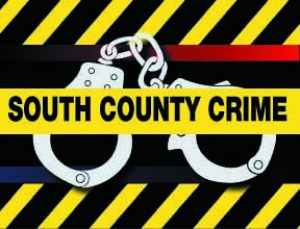 Coffie will appear in court Thursday for his initial appearance in front of U.S. Magistrate Judge Patricia Cohen.

The St. Louis County Police Department had said that at least 10 suspects in six different cars were involved in the burglary, but so far only Coffie has been charged.

Early Sunday morning, May 31, federal prosecutors allege that Coffie and someone else entered the Southside Pawn Shop, 8101 Gravois Road, through a second-story window after climbing onto the roof of a parked minivan.

The two suspects broke the glass of an elevated window in order to gain entry into the pawn shop. While inside the shop, Coffie and the other person fired their guns into multiple glass enclosures in order to get access to the firearms inside and removed them, according to the federal complaint.

Coffie cut himself on the broken glass of the window that had been used to enter the building. Investigators identified Coffie after monitoring social media in an attempt to find information about the burglary.

Not only was he trying to sell the firearms on social media, but a video showed Coffie’s hands had multiple bandages on them. At the time of his arrest, Coffie had one of the stolen guns from the burglary in his possession.

If convicted of the theft of firearms from a federal firearms licensee, Coffie faces a maximum of 10 years in prison and a fine of $250,000.

These charges are the result of an investigation by the U.S. Bureau of Alcohol, Tobacco, Firearms and Explosives and the St. Louis County Police Department. Assistant United States Attorney Donald S. Boyce is handling this case.

A criminal complaint is merely an accusation.  The defendant is presumed innocent until proven guilty in a court of law, federal authorities note.

Man with gun near police shootings is charged

In an unrelated case, Christopher Thomas Gaston, 40, of St. Louis, Missouri, was charged by a federal complaint with being a felon in possession of a firearm.  Gaston will appear in court Thursday for his initial appearance in front of U.S. Magistrate Judge Patricia L. Cohen.

According to the criminal complaint, during an ongoing investigation into the shooting of four St. Louis Metropolitan Police Department officers during the late night hours of June 1 and early morning hours of June 2, investigators determined that Gaston lives in a condominium complex adjacent to the scene of the shooting.

Witnesses reported seeing him with a firearm the evening of the shooting. Security camera footage confirmed the witnesses’ statements and showed Gaston carrying a long gun partially concealed by a blanket.

A search warrant was conducted at Gaston’s condo and agents found two firearms – a 12-gauge pump-action shotgun and a .380 caliber semiautomatic handgun.  The handgun was loaded with five rounds of ammunition and a box of 45 additional rounds of .380 caliber ammunition for the handgun were seized.  Gaston admitted to being a convicted felon and knowing he could not possess firearms.

These charges are the result of a joint investigation by the Federal Bureau of Investigation and the St. Louis Metropolitan Police Department.  Assistant United States Attorney Jason Dunkel is handling this case.