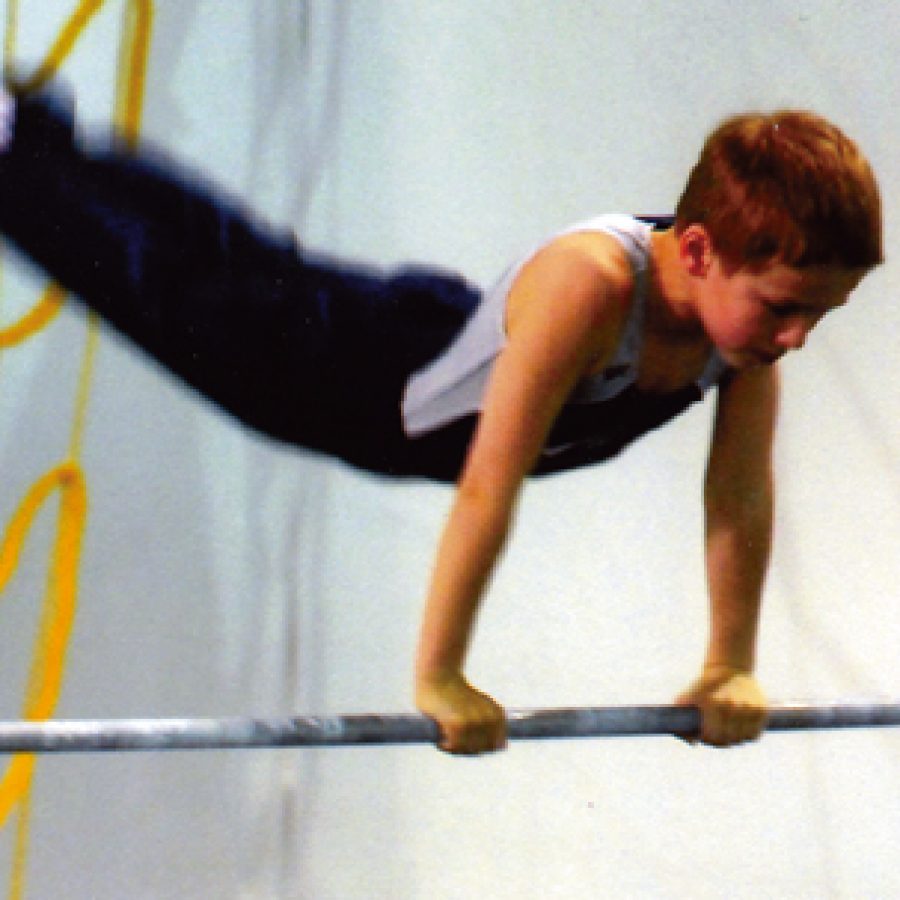 Nolan Bay works his favorite event, the high bar, during the state championships earlier this spring. The Concord resident said he likes the high bar best because he gets to do flips as he dismounts the bar.

Gymnastics was love at first flip for 7-year-old Nolan Bay of Concord.

Often competing against youths much older than himself, Nolan has become one of the top young gymnasts in Missouri.

Nolan, the second of four sons of Don Bay and Kay Holdenried, attends Kennerly Elementary in the Lindbergh School District.

He has been working on gymnastics routines since he was 21⁄2 years old.

“When he was 9 months old, he was doing flips out of his bed,” Kay said. “He’d lean his head over the bar and flop out on the ground. We’d put him back in and he’d do it again. We had to make him sleep in a play pen.”

Nolan could do back handsprings since before he could read. His 12 hours of training each week comes in handy for his mother. When she can’t open a jar of pickles, Nolan gets the call.

“He’s the youngest on his team,” Kay said. “Everyone he competes against is at least a year older than him, some are 12 and we’ve seen 15-year-olds at his skill level.”

In gymnastics, people compete based on their level of ability to complete prescribed activities. Nolan’s activities include the same events in which Olympians compete — still rings, vault, floor exercise, pommel horse, parallel bars and high bar. As athletes compete in each event they also compile points based on their finish in what is called the all-around competition.

All-around points can be used as tiebreakers, Nolan discovered earlier this year. He placed first at the Missouri Level-5 Championships in still rings and high bar.

While his score in the vault was the same as the winners’ scores, Nolan was second because his all-around score was one-tenth of a point lower than the person he tied.

Even though his score on the rings was a personal-best 9.6, Nolan said he likes the high bar best.

“That’s temporary,” said his mom. “It changes every five minutes.”

He also finished second in floor exercise and fourth in pommel horse at the state competition.

“He may have to do some skills that are scary, but he’s able to block that fear out,” said Mike Filla, Nolan’s head coach. “He’s a very fun-loving kid.”

“A lot of kids won’t push themselves to acquire these skills,” Filla said. “Nolan never cheats himself on any of the drills we perform.

“I can hear him across the gym cheering his teammates as they practice. We got really lucky with Nolan. All the guys on his team are best friends. They push each other to get better.”