Loop Trolley still shutting down, might be taken over by Bi-State in new year 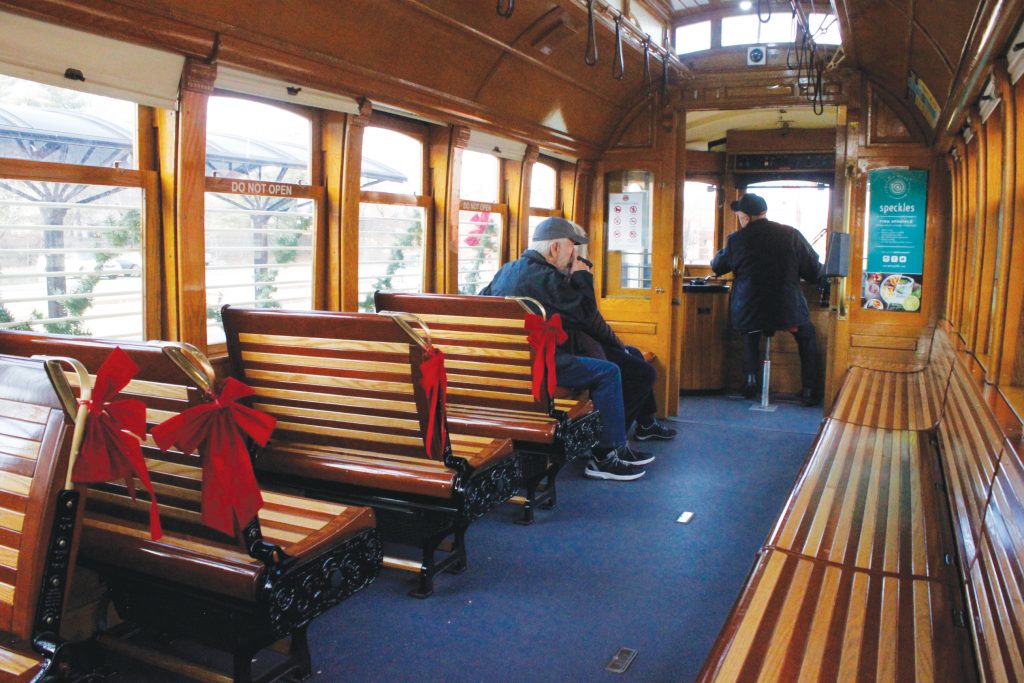 The Loop Trolley was decorated for the holidays, but mostly empty the afternoon of Thursday, Dec. 12. It was the first day the trolley was open after a vote by the Bi-State Development Agency board to look into taking over trolley operations. The trolley’s driver said that he was a retired former Metro driver, but likes the trolley. Photo by Erin Achenbach.

The Bi-State Development Agency board voted Dec. 10 to potentially take over the financially struggling Loop Trolley, despite heated opposition from the Illinois side of the board.

The 6-3 vote was not a final decision to take over trolley operations, Bi-State CEO Taulby Roach emphasized. But it gives him the go-ahead to enter into negotiations and nail down the financial and legal ramifications of a takeover.

Most importantly, he said the takeover of the trolley would not cost local taxpayer dollars for at least four years. Instead, trolley opeations would be funded by $1.1 million in leftover federal grants until the fifth year.

That would prevent the federal government from taking back $36 million of the $52 million already spent on the trolley, with $16 million of that funding infrastructure improvements around the trolley.

Either way, the trolley was set to shut down Dec. 29 as previously announced by its current operator, the Loop Trolley Company. Since the trolley company will dissolve operations Jan. 1, Roach said that Bi-State will take over insuring the trolleys and equipment to ensure that they are not damaged in the months before the possible change in ownership.

The trolley has faced a series of challenges since opening in November 2018, including delays in a trolley car that prevent the line from operating all seven days.

The Bi-State CEO told the board that he will spend the next few months looking into taking on the trolley in more detail, with a hoped-for timeline for a takeover happening by February.

Roach had initially requested that the meeting be held behind closed doors, but after the Madison County members of the board fought to keep the discussion out in the open, the other board members unanimously voted to stay in open session.

In the two-hour meeting, Roach outlined a plan that he says would fund the trolley without using existing Bi-State or Metro funding for at least the next four years.

He also said his plan would not require any new funding during those four years from the local governments that comprise the dual Missouri-Illinois development agency: St. Louis County, city of St. Louis, and in Illinois, St. Clair and Madison counties.

Instead, Roach said he negotiated with Federal Transit Administration Region 7 Administrator Mokhtee Ahmad — who attended the groundbreaking of the Loop Trolley and has long supported the project — so that Bi-State can access $1.1 million in rollover money from unused legacy grants, or money that was once awarded to Bi-State for projects that later came under budget, creating a surplus that was rolled into future projects.

Typically those funds can only be used for capital expenses, but Roach said he got the federal transit administrator to informally agree to allow that money to be used to operate the Loop Trolley.

Roach presented a proposed budget for the trolley to the board before the meeting.

Most of the money to operate the trolley comes from a special taxing district on the Delmar Loop, the Loop Trolley Transportation Development District, which raises roughly $800,000 a year. The trolley costs about $1 million to operate. The federal money would make up the difference for the next four years, Roach said. He said his analysis used conservative ridership figures and conservative sales-tax estimates.

But he noted that two new large developments around the Loop, including a CVS pharmacy, should bring in more sales-tax money for the trolley.

The $52 million trolley was funded with $33 million in federal grants, and Roach said the main reason he would want to take over the trolley is because he worries that if trolley operators default on that federal grant, the federal government would be less likely to give the St. Louis region federal funding in the future.

Bi-State operates Metro buses and MetroLink light-rail systems, and money for that infrastructure often comes from the federal government.

Metro’s paid lobbyist in Washington, D.C., Jim Brown, found one example of federal officials docking a region after a grant wasn’t used in Fort Worth, which returned a federal grant unused. After that, the region didn’t get as many federal grants, Brown said.

And Roach pointed out that unlike the Fort Worth situation, trolley operators would just default on the grant rather than return the funding.

Roach said he’d been working on the project for about 40 days, dating to the time after the trolley announced it would need a $700,000 bailout from taxpayers to operate through 2020.

He said “the electeds” from Metro’s three funding governments — St. Louis County Executive Sam Page, St. Louis Mayor Lyda Krewson and St. Clair County Board Chairman Mark Kern — asked him to come up with a plan to take over the trolley without using local taxpayer dollars.

In a statement, Page said that the trolley “must have new leadership, a long term plan and a funding source that is not St. Louis County. The Bi-State plan seems to fulfill my three goals. But I will watch what happens closely to make sure St. Louis County residents aren’t taken advantage of.”

Krewson said in a statement that she will be closely watching the process and that federal grant dollars cannot be jeopardized. She emphasized that the trolley is a “regional transit asset.”

The Madison County representatives on the nine-member board, Derrick Cox and Justin Zimmerman, argued throughout the meeting against taking over the trolley.

First, they persuaded the rest of the board to hold the meeting in public. A Bi-State attorney said that closed-session matters like personnel issues could be referenced, so a discussion would be “enhanced” by holding it behind closed doors. But the Illinois members said that when it came to a budget and the general issue of taking over the trolley, the public deserved to know what was discussed.

“This is public tax dollars, I don’t know what we’re trying to keep secret,” Cox said. “Prove it to the public why this is a good thing.”

“There is no reason to think that the situation with the trolley will ever improve,” Sullivan said. “Nobody wants to ride it.”

But Loop Trolley President John Meyer, who said he volunteers for the position, asked the board to give the trolley a chance.

“The trolley’s never had a fair chance to prove its worth,” since it has never operated with three cars as intended, he said. One trolley car is still being worked on in Iowa instead of on the tracks in University City.

“St. Louis does not need another failure at this juncture,” Meyer said. “St. Louis needs a success.”