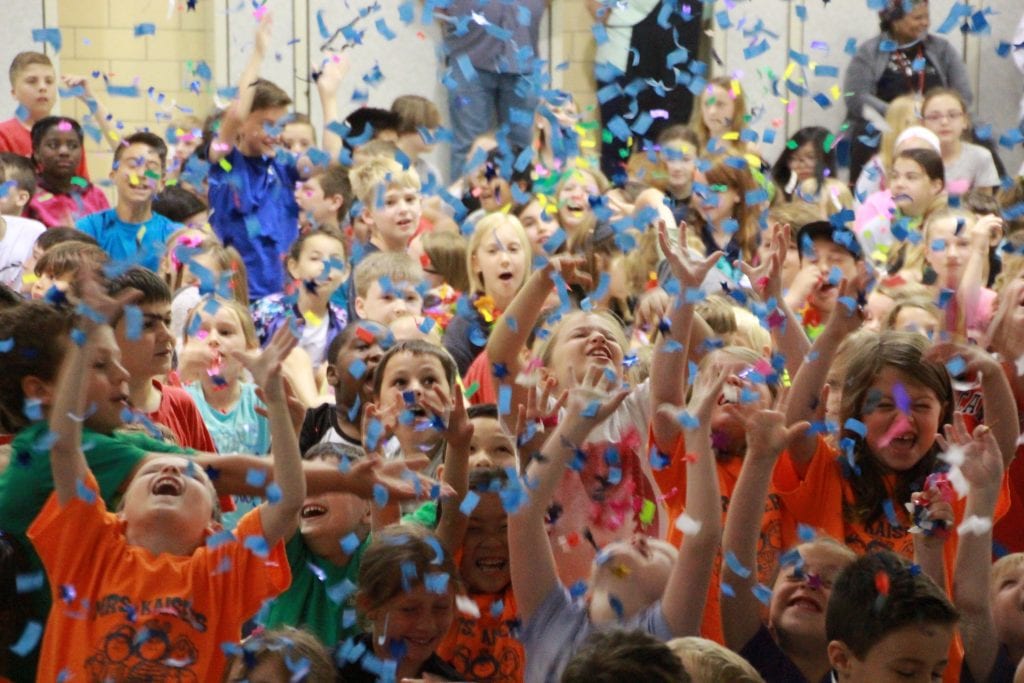 Students at Long Elementary School celebrate their National School of Character Award on May 18.

Three local schools were among the 17 Missouri schools and 73 schools nationwide to receive the 2018 National School of Character Award from Character.org, a nonprofit organization that validates character initiatives in schools and communities around the world.

All three schools — Long Elementary in Lindbergh Schools and Beasley Elementary and Mehlville High School in the Mehlville School District — renewed their character honors after previously holding them for five years.

National Schools of Character are schools, early childhood through high school, that have demonstrated through a rigorous evaluation process that character development has had a positive impact on academics, student behavior, and school climate. These schools become part of a network of Schools of Character that serve as models and mentors to other educators.

“Developing students academically is just part of the work we do here at Beasley,” Beasley Principal Andrea Deane said in a news release.  “We also teach the importance of positive behavior, cooperating with others and being a good citizen.  When students leave the Mehlville district, we want them to be prepared for success in their careers and in their lives.  Character development will help make that happen.”

Long Elementary’s focus on character education includes components of the Leader in Me program and Seven Habits of Highly Effective Kids. The school focuses on reaching the needs of the whole child using tools such as student goal setting, student leadership roles, and the seven habits, according to a district news release. Staff work hard to make sure every student feels like part of the Long family. As a result, Long students have grown into strong leaders with a desire to give back to their community.

“Service, respect and kindness are essential pieces of who we have become at Long,” Long Principal Jana Parker said. “Our Long Leaders continually go above and beyond to make Long Elementary their school. They are constantly creating new building leadership positions because we have so many students who want to give back.  Even our Long Leaders in kindergarten strive to make a difference.”

Long won its first National School of Character Award in 2009 and has received several Promising Practice Awards, including one in 2017 for their schoolwide kindness walk, which brings together all students for a walk to promote caring, peace and respect. Students take a walk through their school’s neighborhood, carry brightly colored posters and promote kindness in their community.

“We are extremely proud of Long Elementary School, as they have worked together as a community of students, staff and families to reach this milestone in character education,” Superintendent Jim Simpson said.

Character.org will honor the designated schools and districts at its 25th National Forum on Character Education, Oct. 4-7, 2018, in Washington, D.C. Visit www.character.org to learn more.