No 'culture of fear' in Lindbergh, Simpson says 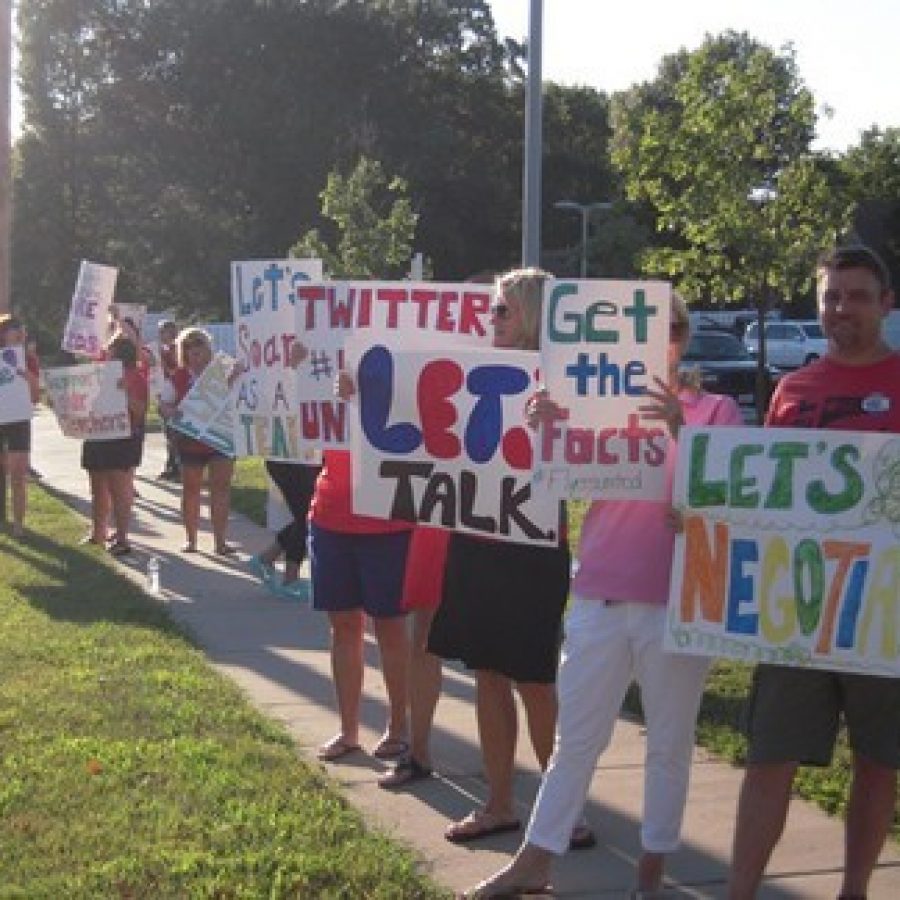 A line of Lindbergh teachers picketing outside the Aug. 19 Board of Education meeting.

“A culture of fear” exists in Lindbergh Schools, the president of the Lindbergh National Education Association told the Board of Education last week.

Teachers speaking on behalf of the LNEA first accused district officials and board members of not bargaining in good faith in July.

At the August and September board meetings, teachers and their supporters have urged administrators and board members to reopen negotiations.

But Lindbergh officials remain firm that negotiations will not be reopened until Feb. 1, as mandated by board policy.

Scronce, who teaches at Long Elementary School, said, “I have a list of over 200 signatures from teachers in the Lindbergh district who feel that in light of what has occurred, the district needs to come to the table now and begin negotiating for next year, as it is going to take some time to work through issues that have developed.

“Sadly, we have many teachers that also feel this way, but chose not to sign because they were afraid of repercussions. Teachers expressed that they agreed with the actions of LNEA leadership, but feared they may be targeted for retaliation. This was heard from non-tenured teachers, as well as tenured. There is a culture of fear in this district, and that is not healthy. It does not create an atmosphere of collaboration and certainly should not exist in a district of character like Lindbergh. It is in the best interests to open negotiations for the 2016-2017 school year now, to address some of these issues, as well as begin our journey back to a healthy relationship …”

Asked about Scronce’s remark regarding “a culture of fear,” Superintendent Jim Simpson told the Call that it was “disappointing” and “untrue.”

“… That hurt all our feelings because we all know how untrue that is. As an example of that, at the cabinet we strongly believe there is zero evidence of that — zero,” he said. “There’s not one single employee or a situation of an employee in this district that has had any kind of retribution or any kinds of actions taken upon them.

“And I would say in terms of culture of fear, there seems to be absolutely no fear for the LNEA to make any accusations openly and publicly against the school district and because they realize nothing happens — they know that nothing happens, that the board and administration in no way would ever, ever — and has never — done anything under the idea of culture of fear. That’s such a painful, and like I said, a disappointing statement because we all know how untrue it is.”

Jennifer Swift, who teaches at Lindbergh High School, told the board it needs to hold up its end of the bargain and fairly compensate district teachers.

“… I came to Lindbergh High School, I guess, 17 years ago, after I had four years of experience in other districts,” she said. “I came here because they were one of the highest-paid districts, and they were known to take care of their teachers. I know that, and so therefore I take everything I could to Lindbergh.

Over the past two years, district teachers have received, on average, raises totaling 8.5 percent — 5.3 percent last year and 3.2 percent this year, according to Simpson.

In addition, teachers receive a board-paid retirement contribution of 14.5 percent of their salary — which includes the cost of medical, dental and vision insurance.

Furthermore, the board pays a Medicare tax totaling 1.45 percent of a teacher’s salary.