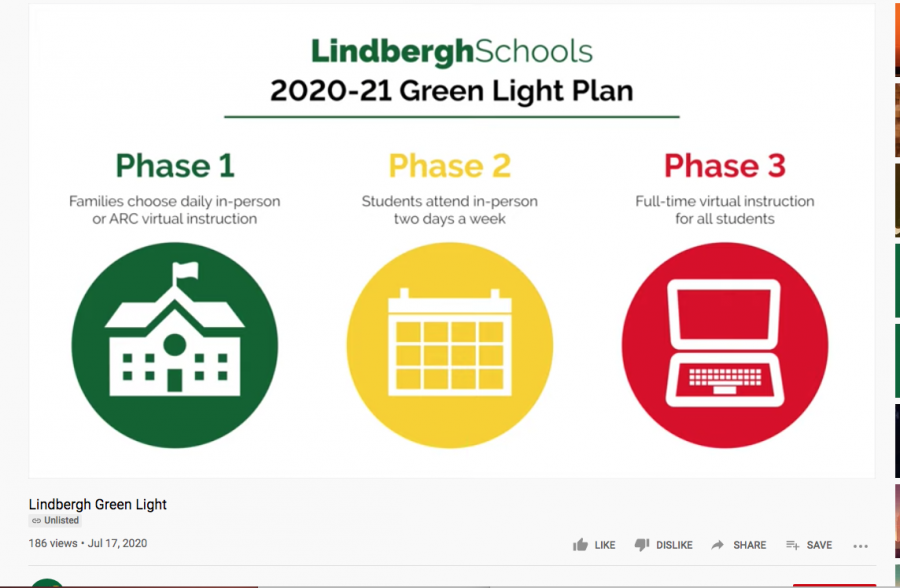 Like other St. Louis County school districts, Lindbergh Schools will return to school in person two days a week this fall, with three days of virtual instruction. It would be the first time schools have hosted students in person since March, when all schools closed due to the COVID-19 pandemic.

All St. Louis County school districts are releasing their reopening plans Monday, but Lindbergh and the other districts all caution that plans could change between now and Aug. 24, when school starts for most districts.

One thing is for sure: “The upcoming school year will be one that we will never forget,” Superintendent Tony Lake said in a YouTube video introducing the reopening that was first sent to staff Monday morning. It was sent at noon Monday to the general public.

The plans were developed by a 61-person Reopening Task Force that has been meeting by videoconferencing app Zoom every Wednesday since Memorial Day. But the plans have been revised in the last few weeks as coronavirus cases have spiked among young people in St. Louis County. The guidelines were also based on surveys that were returned by 3,792 parents, 213 students and 794 staff members.

Presenting highlights of the plans to the Board of Education in a workshop last week, Lake said, “There is no final draft, this is fluid. It may be a document released on the 20th,” but like the district’s COMPASS strategic plan, the reopening plan will be a “living, breathing document that can change and flow — we’ve used the analogy sometimes you feel like you’re drinking out of a fire hose.”

Lake said that plans changed based on the rising cases of the virus in the community.

“We’ve been going down a certain path for the last month or so, and in the last five days things have really began to take a different feel for that so we’re in the process of looking at what does that mean for us,” Lake told the board, which received the reopening plan Friday.

Lindbergh will have three phases of reopening: Phase 1, Phase 2 and Phase 3. Phase 1 would be five days a week of in-person instruction, while Phase 2 is alternating days of in-person and virtual instructions to provide social distancing and staggered times in class for rotating groups of students. Phase 3 means that buildings will completely close and all instruction would be virtual, as it was this spring.

School will start in August under Phase 2, with staggered in-person times for students. Different grade levels may operate on different phases at any given time, Lake said. He predicts that the district will move between the phases several different times during the school year, so parents, students and staff should be prepared for that.

Masks will be required for every teacher and staff member along with every student in grades 4-12. Masks are encouraged for younger students, and every student must bring their own mask. Students and staff will have to undergo a daily health screening at home each day before they leave for school, and if they have any COVID-19 symptoms they cannot come to school. Students will be limited to 15 minutes of small-group time, will have schedules that limit their contact with staff members and will spend more time outside. Cleaning will be done more frequently throughout the day, and hand sanitizer will be available in classrooms.

All schools will be closed to all visitors, including parents and family members. Each school has trained contact tracers to figure out possible exposures when someone tests positive at a school.

The district has used something it calls “space mining” with its architects to find more usable areas to space students out more. That has been more challenging in middle and high school than in the elementary schools, Lake said.

Buses will be limited to those who don’t live close to school, and the district is encouraging any parents who can drop off their children and pick them up to do so. Buses for K-5 students will only be provided for those who live more than half a mile from school, and buses will only be provided for sixth through 12th grades for students who live more than a mile from school. But the district will keep in mind safe school zones when creating bus routes, with possible exceptions to those rules. Families who want bus service will have to sign up for it.

“It is important to understand that these precautions will not necessarily eliminate COVID-19 from our learning environments, what they will do though is help us mitigate risk while allowing students to return to school,” Lake said in the video.

For students who want to visit the school nurse, two spaces will be provided: One for routine non-COVID visits such as receiving daily medications, and one for those with COVID-19 symptoms.

Parents can give feedback on the plans for the next two weeks at bit.ly/GreenLightFeedback.

Lindbergh is also starting a completely virtual online school, which will be separate from the in-person instruction. The new program, called ARC — Accelerated Remote Courses — will eventually allow students to work ahead of their grade, but for now it will be used as a way for every student to take advantage of a fully virtual education. In the future, ARC “will become part of our school district’s DNA going forward,” Lake said.

Those “students of the future” will get the benefit of a perfected system, officials said. But the virtual school option will be much more organized and better for students than the version they experienced in the spring, Chief Academic Officer Tara Sparks said.

“It does not look like what we had virtual learning look like in the spring,” Sparks said of ARC.

The district has also been able to adapt virtual learning from what it has learned through its current all-virtual summer school, which continues through August.

Lindbergh teachers will teach classes for the virtual school, and if there’s not enough participation in a class, a learning platform called Launch could be used.