Lindbergh to ring in completion of new elementary school 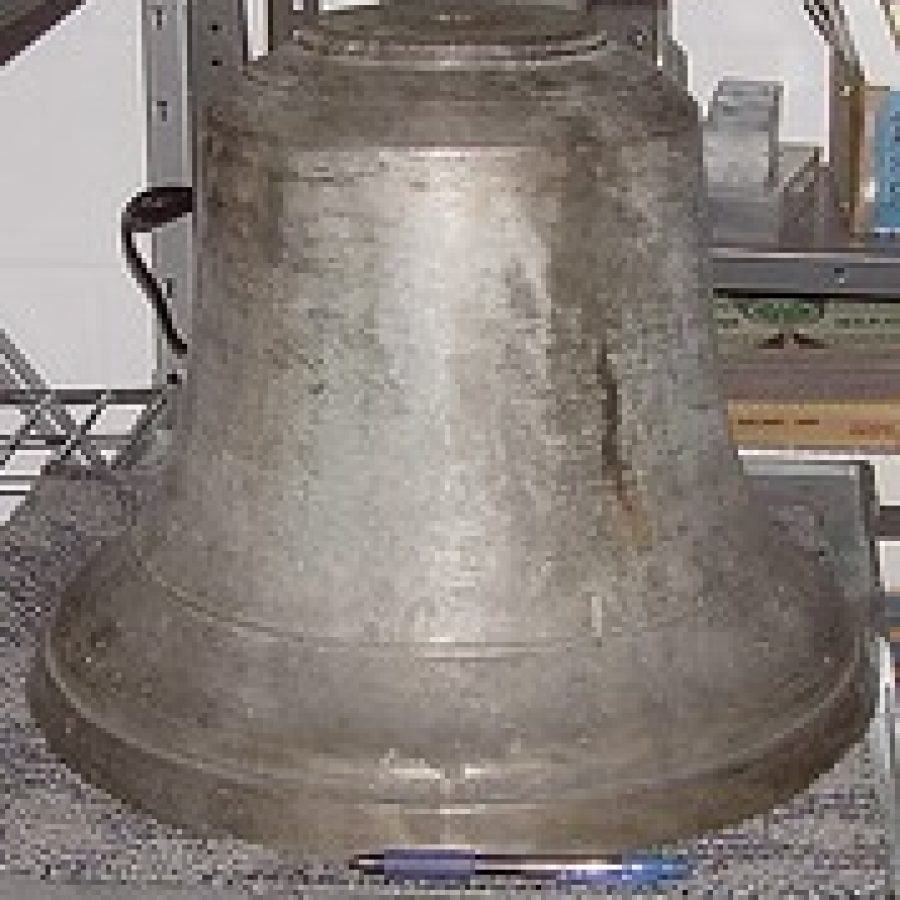 Those attending next month’s ribbon-cutting ceremony for the new Concord Elementary School will hear something that perhaps no living person has heard — the ringing of a bell dated 1886 discovered during the renovation of the building.

The new elementary school previously was home to the Lindbergh Early Child Education center, which is now housed in a new building next to the Administration Building on the Lindbergh High School campus. During renovation work that has more than doubled the size of the school, the historic bell was found, Superintendent Jim Simpson told the Call.

“… When we were tearing into the attic of the oldest part of Concord (School), there was the school bell in place. It hadn’t been rung in anyone’s memory and it was somewhat forgotten in time. But there it was. So we took the bell out of the attic and we had it refurbished,” he said.

“We’re almost sure it was the original bell for the one-room log schoolhouse. It’s gone with the building all the way through and when electricity came, they didn’t need it anymore. So it was just forgotten up there. Electricity doomed the bell,” Simpson continued. “But now we’ve brought the bell back and at the ribbon cutting the bell will be rung for the first time, and like I said, in anyone’s memory. I doubt there’s anyone living who’s heard this bell ring and it will be rung to start Concord off on its new century.”

The bell was restored by Lindbergh’s Facilities Department through “a generous donation” from the Sappington-Concord Historical Society, he said.

“… It is in good-looking shape,” Simpson said of the restored bell. “It looks like it was just made … It’s very exciting to have that kind of history with us.”

The renovation and expansion of the former ECE building into a 70,035-square-foot elementary school is being funded through the school district’s Proposition R 2008 bond issue.

The school board had placed Proposition R 2008 on the ballot with the goal of providing a long-term solution to space concerns at Sperreng Middle School.

More than 1,300 sixth-, seventh- and eighth-graders have been jammed into the middle school that was designed to accommodate 800 pupils when it opened in 1970.

While Sperreng will remain a sixth- through eighth-grade middle school, funds from Prop R 2008 are being used to convert Truman Elementary School to a sixth- through eighth-grade middle school, add onto Crestwood and Long elementary schools, convert Concord to an elementary school and construct the new ECE building at 4814 S. Lindbergh Blvd.

Both the ECE building and the new Concord Elementary School were designed by Ittner Architects and built by Diestelkamp Construction.

“Concord is a school that has not just been given new life, it’s greater than the sum of its parts. It’s taken on a holistic presence there and the old blended with the new so well,” the superintendent said. “Our architects did a great job in bringing all the parts of that building together. It is a very attractive and modern school building — modern in every sense of the way. All our buildings are at the same level of being modern, but this one is basically a brand new 500-student campus.

“The old sections have been completely renovated — not partially renovated, but 100 percent. Everything has been gutted and taken out except the walls, the concrete floor and the ceilings. In some cases, we poured new concrete floors because they were cracked so bad, the old concrete, and it was a history lesson in demolition of the old building.”

For example, Simpson said that during demolition work “huge amounts of horsehair insulation” were uncovered.

“I came over there and this huge amount of brown hair was piled up everywhere … When they tore the plaster walls down, behind that was all this horsehair insulation,” he said.

The history of the school site itself also added a few surprises to the project, according to Simpson.

“… That’s an old site, a very old site and so when we were redesigning the outside of the building and doing new landscaping, new parking lots, we plowed into so many unexpected underground things — old foundations that no one ever knew there was anything there, old drainage systems that no one knows where they came from or where they go,” he said. “It seemed like we were hitting something there every day for a while …

“None of it was archeological other than it simply showed that whole site has been covered with buildings at one time or another and they’ve been removed and grass has grown up, but the roots of those buildings are still down in there.”

The superintendent particularly is proud of the new gymnasium.

“We put a high-school-sized gymnasium there because we’re short of gymnasiums in the district very much, and we needed a competition gym — not an elementary gym, which is too short for basketball competition and we needed high ceilings for volleyball …,” Simpson said, adding the new gymnasium will help alleviate scheduling problems district officials have faced.

“… We have many levels of competition, from ninth grade to junior varsity to varsity, lots of games to play, and if you don’t have enough gyms, you have to play to midnight to get them all in,” he said. “So this allows us to get kids home sooner and get games over with at a more reasonable time so we’re happy to have that. It’s air conditioned and it’s just a really fine gym for competition sports.

“And it will serve as an incredibly good place for students to use at Concord during the day.”