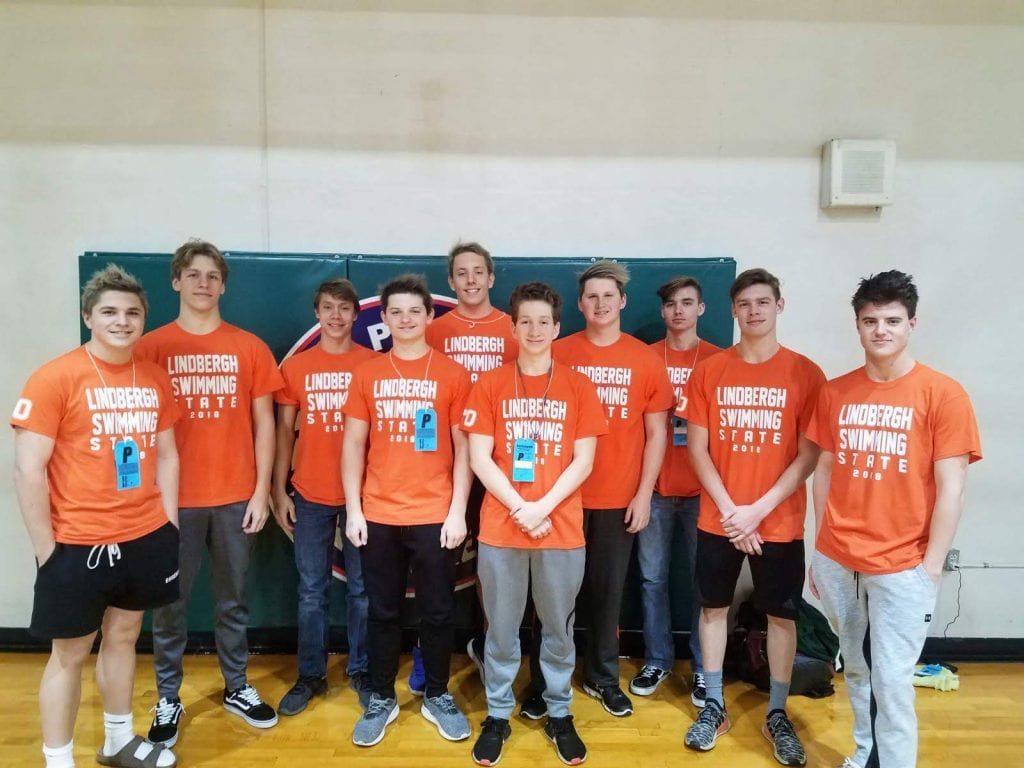 Behind the performances of seniors Tyler Lewis and Will Doyle, the Lindbergh boys’ swimming and diving team took 14th overall at the Missouri Class 2 state championships earlier this month.

“I think that overall our boys did an awesome job,” Lindbergh head coach Tim Lombardo said. “We were hopeful that we would swim a little bit better at state, but overall I was very satisfied with our season.”

Lewis was nothing short of dominating at the state championships this season as he took runner-up honors in the 200-yard individual medley and fourth overall in the 100-yard backstroke. His time of 1:50.58 in the 200 I.M. was a school record as was his time of 51.12 in the backstroke.

“I didn’t do as well as I would have liked,” Lewis said. “In the 200 I.M., everything was clicking right for me and it was a good race. In the 100 back, I usually swim it all underwater. But during this race, I was up on top of it. I just got barely out-touched by a couple of people.”

He also had record-breaking showings in the 100-yard breaststroke and 100-yard butterfly during the course of the 2018 season. Currently Lewis has a verbal commitment with Missouri State University.

“Obviously we were hoping that Tyler would get a state championship,” Lombardo said. “He’s a great athlete and an even better kid.”

“Will had his best swims of the year at state this season,” Lombardo said. “He actually dropped two seconds off his time in the even from last year and was so close to getting into the top 16 this year.”

The senior butterfly and freestyle specialist believes that his performance in the 200 was probably his best of the season.

“It was a good race,” Doyle said. “I was feeling good throughout the race, and I did what I had to do. I knew that I did my best and that coach Lombardo was really proud of me.”

The Flyers also took 11th overall in the 400-yard freestyle relay with a time of 3:20:13 behind solid performances by juniors Matt Deutschmann and Patrick Akins and senior Sam Hunter, with Lewis holding down the anchor leg.

“All of our guys had a great swim on that relay,” Lombardo said. “Matt (Deutschmann) actually stepped up and swam on all three relays for us this year at state.”

Lindbergh’s 200-yard medley team made of Hunter, Lewis, Doyle and Deutschmann took 12th overall, but their time of 1:39:59 in the preliminaries established a new school record.

“Sam had a good leadoff swim for us in the 50-yard back,” Lombardo said. “I was super excited about our guys breaking the school record in the prelims.”

“We went out and did our best,” Doyle said. “We were just focused on swimming well and being able to swim the next day.”