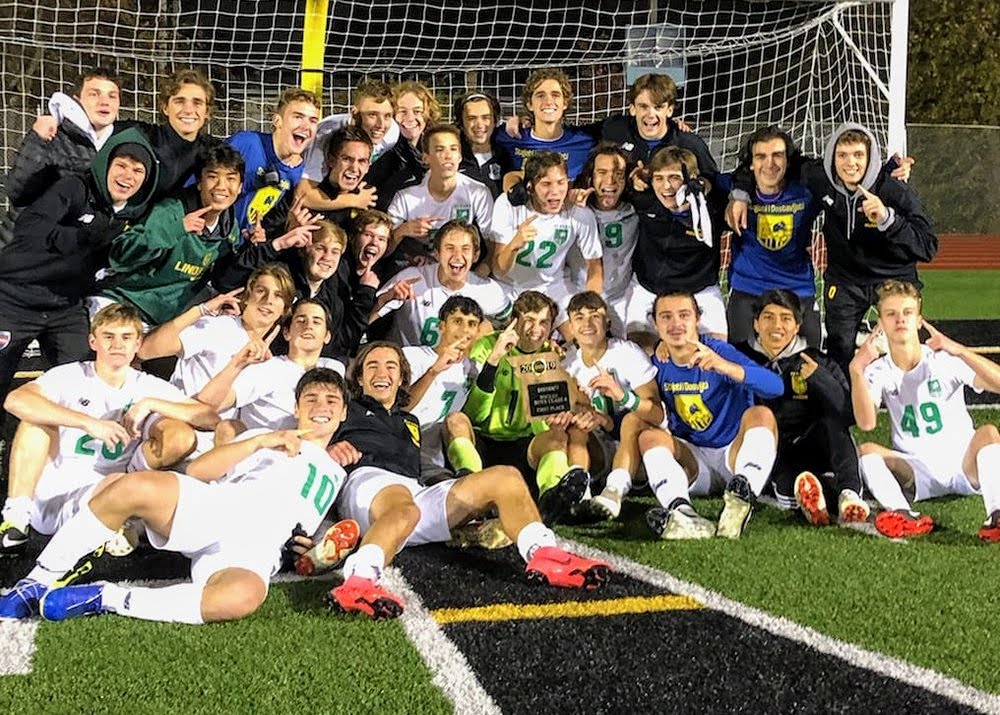 The Lindbergh boys soccer team celebrates Nov. 6 after winning its first district championship in 21 years, in overtime against Mehlville.

Web Exclusive Update: Due to a snow day at both Lindbergh and Northwest, the Lindbergh boys soccer sectional game versus Northwest has been canceled for Tuesday night and rescheduled to Wednesday. The game will now be played at 6 p.m. Wednesday at Northwest.

A few weeks ago, no one on the Lindbergh High boys soccer team could have remembered the last time the team won the district championship because none of them had even been born when the Flyers last hoisted a district title in 1998.

But the Flyers (15-8-1) rewrote history last week as they posted a dramatic 2-1 overtime win over Mehlville to take the team’s first district championship in 21 years. In the last few years, it’s usually been Mehlville that ended Lindbergh’s season.

“We’ve been to many district finals, unfortunately we fell short in those games,” Lindbergh head coach Mark Giesing said. “Mehlville has had our number these last several years.”

But Lindbergh flipped that script during the Nov. 6 game, which was played at Mehlville High School.

“Sometimes it’s a little bit of luck,” Giesing said. “I think that in this game, we made the most of our opportunities and minimized most of their chances.”

After a 0-0 tie following one half of play, the Flyers got on the scoreboard with a goal by junior midfielder Nick Merlo and senior defender Cole Hutson recording the assist.

“It was a set-piece ball, and Merlo was able to get the goal on a header,” Giesing said. “Nick has always been a hardworking center midfielder for us who’s really turned things up in the second half of the season. He’s been scoring for us at critical times.”

Mehlville tied the score with eight seconds to play on a goal by sophomore midfielder Dino Mahmutovic.

The Flyers battled back to win the game on an overtime goal by senior forward Fetiol Hyke. Junior forward Almir “Ami” Mujcinovic notched the assist.

“We got a dead ball served in the box, and Almir made the initial contact and flicked the ball across the backside of the goal,” Giesing said. “Fetiol had a fairly easy head ball for the game winner.”

Lindbergh was set to be back in action Tuesday — after The Call went to press —  traveling to House Springs to take on Northwest at 6 p.m. But that game was canceled due to snow days at both schools and rescheduled for the same time and place Wednesday.

“I think our bracket is really up for grabs, and it’s going to be who comes in with the hot hand,” Giesing said. “Northwest has tremendous speed, and they can score a lot of goals. So I think they’re going to be a very good opponent for us.”

Should Lindbergh win, they will face the winner of the Kirkwood vs. CBC game Nov. 16 in the Missouri Class 4 quarterfinal, with times and locations to be determined.