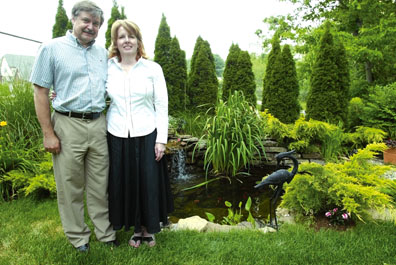 Pictured above: Ray and Quinn Heilich’s garden on David Scott Drive will be among six featured as part of the Lindbergh High School Mothers’ Club’s sixth annual Garden Tour Saturday, June 2. A story and another photograph about the upcoming Garden Tour are featured in the Home & Garden section. Photo by Bill Milligan.

Proceeds from the event, which will be conducted rain or shine, will fund scholarships and leadership and academic programs at the district.

The Missouri Botanical Gardens’ Plants of Merit program for non-invasive plants that preserve and protect the environment was incorporated in each garden this year.

“This is just entertainment for me,” said David Poos of Crestwood Drive in Crestwood. “My family is all farming folks. I guess it’s just in the genes.”

Poos calls his garden, one of the six that will be featured, a collector’s garden. He features 50 different varieties of hostas and 900 varieties of day lilies. He retired seven years ago from the Missouri Auto Club and said that’s when his gardening obsession began.

“I wanted to start experimenting with hybrids, so I converted my vegetable garden to an experimental bed,” he said.

A 38-year resident of Crestwood, Poos also is a member of an area garden club which is bringing a National Hosta Convention to St. Louis in June 2008.

Patrick O’Neill’s garden on Larkspur Drive also will be featured on the tour.

“I started gardening when my kids were young,” he said. “I wanted them to learn how things grow and I didn’t like cutting grass.”

Featured for the first time this year is the home of Ray and Quinn Heilich on David Scott Drive. After building their home in 2000, the couple imported 70 truckloads of dirt to build their yard.

“We went on the tour three to four times and we got a lot of our ideas from the yards we saw,” Quinn Heilich said. “We add something new every year.”