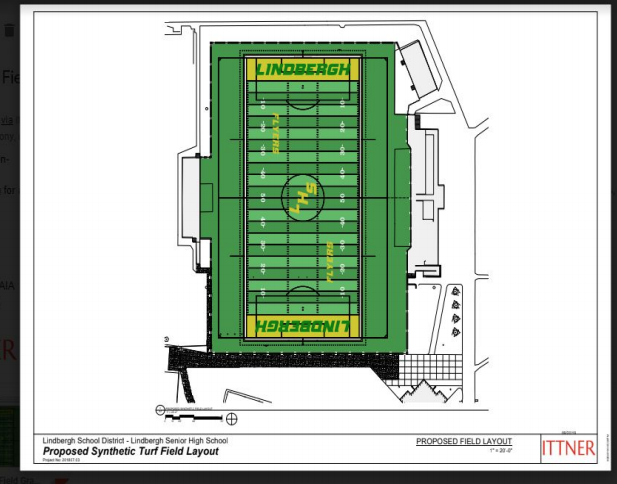 Pictured above: The proposed synthetic turf layout for the Lindbergh High School stadium.

Lindbergh High School’s football and soccer stadium will be upgraded to a turf field this spring as part of the improvements voters approved with the passage in April of Proposition R, a $105 million, 83-cent no-tax-rate-increase bond issue that will build a new high school.

The Lindbergh Board of Education approved the purchase of synthetic turf Oct. 8, which will be installed on the football field and soccer stadium at the end of the fall sports season.

The purchase follows many months of researching different turf options and studying fields at other high schools and colleges.

Athletic Director Scott Luczak, along with head football and soccer coaches and architects for the district, visited multiple area schools and narrowed the search to four different types of synthetic turf. The four options were first presented to the Lindbergh Finance Committee Oct. 3.

“There’s a ton of turf systems out there, but they (Luczak and the coaches) narrowed it down to four that they really liked. What we went out to bid for was four different turf systems: Shaw Sports, Greenfields, Sporturf and Greenfields Woven,” said Chief Financial Officer Joël Cracchiolo at the Finance Committee meeting.

Samples of each type of turf were available for committee members and attendees at the meeting to feel, something board member Mike Tsichlis said he appreciated.

The original committee comprised of Luczak and coaches that made the site visits in April met in September to review pricing details and unanimously decided to recommend the Greenfields Woven Turf System, with installation by Byrne & Jones Construction. Because the turf is woven, it will also prevent “blade” loss and will last longer.

“In talking to the people that are on the turf all the time, which is the coaches and our athletic director, they said that this turf plays like grass,” said Cracchiolo. “It’s the same turf that’s on the Fenton Soccer Park field.”

The pricing for the new turf, which includes installation, football/soccer marking, tick marks for field hockey, unified lacrosse lines and turf logos and graphics, falls in the allotted Prop R budget. It was included in the plan approved by voters.

Installation of the turf will begin in November, after the football and soccer seasons. Once completed, it will be the first finished project funded by Prop R.

“Of all the products we viewed, this product plays like grass and will stand up the best over the long term,” Luczak said in the Oct. 11 news release. “We are excited about the opportunities this improvement will provide for our student athletes and Flyers fans alike.”

A turf field has been a long time coming for Lindbergh, as turf became the preferred surface for football fields. Neighboring districts like Mehlville have played on turf for more than a decade.

A group of parents, alumni, coaches and teachers formed the Lindbergh Partners in 2009 to fundraise for the installation of a turf field, but nothing ever came of it.

The last time the high-school fields were renovated was in 1995 as part of a $25 million bond issue approved in April 1995.

In addition to the turf project, Prop R will also fund the renovation and rebuilding of a new high school in the same location as the current one, as well as secure entry vestibules at three elementary and two middle schools and moving three maintenance and landscape shops off campus.