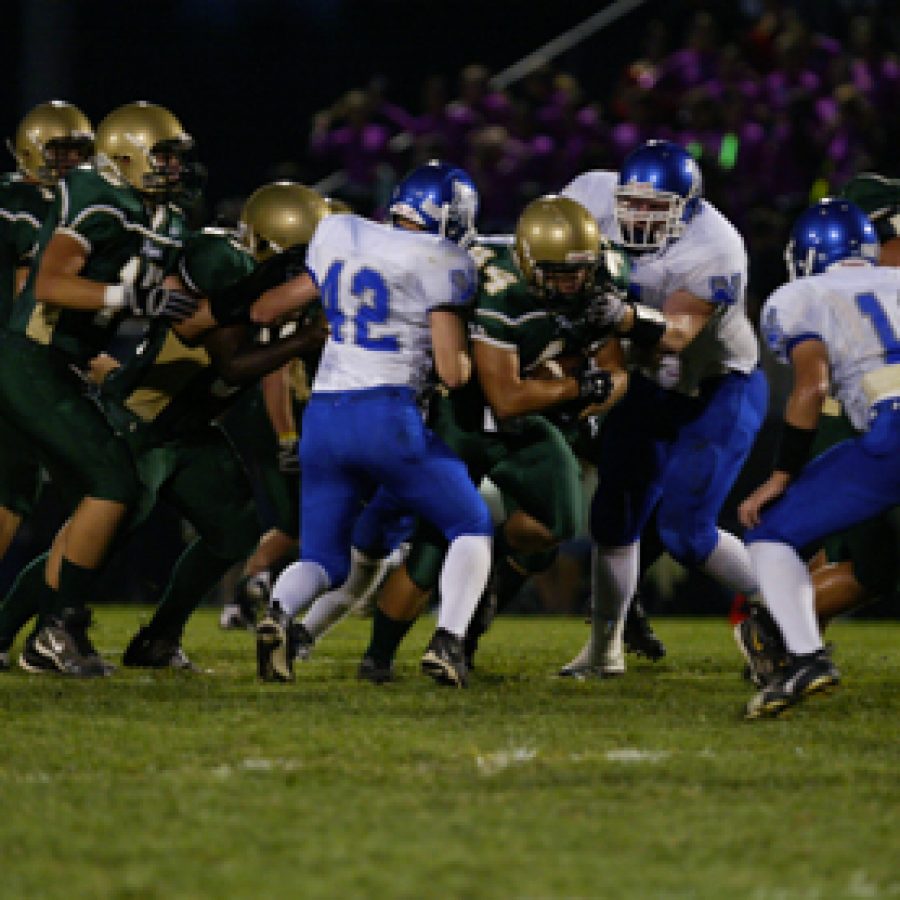 The Lindbergh High School football team extended its winning streak to six games Friday night with its fourth win of the 2008 season in a 29-14 drubbing of Northwest.

“I thought that we started off slow and they gave us everything we wanted in the first half,” Lindbergh head coach Tom Beauchamp said. “The kids played fairly well in the second half, despite having seven dropped balls.”

Lindbergh (4-0, 2-0 Suburban West) jumped out to a 6-0 lead when quarterback Kyle Portell grinded in a one-yard run with 11:19 left in the second quarter. Place kicker Eric Schwartz nailed the point-after-touchdown to give the Flyers a 7-0 lead.

Portell completed 11 of 27 passes for 97 yards and two interceptions.

“Kyle did a good job,” Beauchamp said. “His stats could have looked a whole lot better, but we dropped about 10 passes.”

With 8:30 left in the second quarter, Lindbergh jumped out to a 9-0 lead when Austin Good sacked Northwest quarterback Jake Waterkotte.

“He (Waterkotte) probably got hit three times in the end zone before being taken down,” Beauchamp said. “When Austin got a hold of him, he was finally able to take him to the ground.”

But Waterkotte trimmed Lindbergh’s lead to 9-7 on a one-yard run with 24 seconds left in the second quarter.

“Jake Waterkotte is such a hard-nosed player,” Beau-champ said. “We hit him good a few times and he kept coming at us. He’s a real tough individual.”

The Flyers extended their lead to 16-7 on a six-yard run by Ryan Campbell with 5:56 left in the third quarter.

“Ryan’s a very tough player that’s one of the vocal leaders on the team,” Beauchamp said. “When he carries the ball, he’s tough to bring down.”

Lindbergh jumped out to a 22-7 lead with 2:17 remaining in the third quarter when Mike Heumann scored on a 55-yard run.

Heumann led the Flyers in rushing and also in receiving with five receptions for 40 yards.

“Mike Heumann keeps popping up every week for us,” Beauchamp said. “He got the chance to take a hand off and they were not going to catch him after that.”

The Flyers’ final score of the game came with 11:04 left in the fourth quarter when Brendan Maloney recovered a fumble in the end zone for a touchdown to give Lindbergh a 29-7 lead.

“Brendan leads the Suburban West in sacks and has really been coming on here as of late,” Beauchamp said. “He’s really making it happen out on the field.”

The Flyers are on the road when they travel to Lafayette (3-1, 2-0 Suburban West) for a 7 p.m. Friday meeting with the Lancers.

“Lafayette is always going to be a team that plays hard and is well-coached,” Beauchamp said. “They’re a solid ball club and we’re hoping to go over there and give them everything we could give them.”