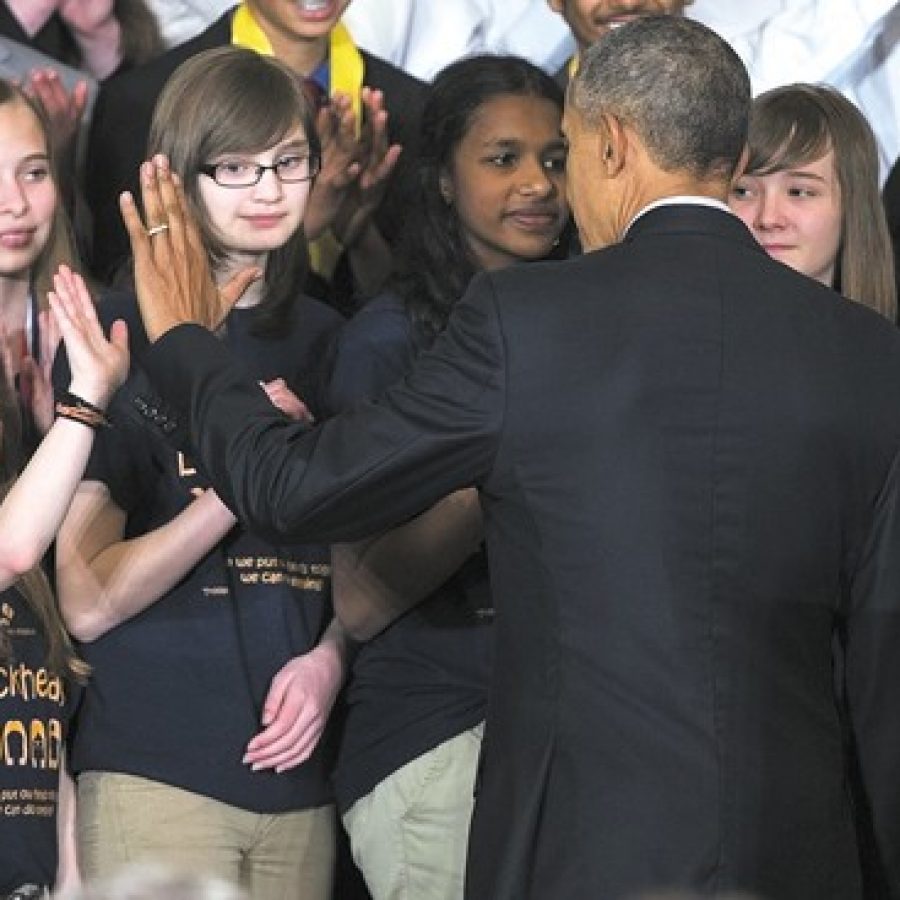 A project that began as a simple idea to solve a problem in Sunset Hills transformed into a pair of inventions that took a local Girl Scout troop all the way to the White House Science Fair, where they gained a fan in President Barack Obama.

The five sixth- and seventh-graders who make up Girl Scout Troop 1484 and a robotics team from Sperreng Middle School celebrated their successful meeting with Obama and explained the eco-friendly inventions that he tested at a presentation last week at the Sunset Hills senior community where it all started, Friendship Village.

Team members are Sindhu Bala, Julianna Jones, Reagan Mattison and Christina Yepez of Sunset Hills, and Sydney Gralike of Concord. The girls, all 12 and 13 years old, were one of 40 teams invited to the sixth and potentially final White House Science Fair April 13. They were the only Girl Scout troop invited.

As one of just seven teams chosen to personally present their projects to Obama, the Lindbergh Schools students explained to him how they developed their inventions: The trash can-like EcoBin dissolves Styrofoam for homes and businesses and keeps it out of landfills, while the EcoBin’s byproduct, EcoGloo, is a glue that some testers believe works better than glues already on the market.

The girls explained to their parents, grandparents and Sunset Hills residents at Friendship Village on April 27 how they developed the inventions while setting out to solve an environmental problem. It was the same day that new Sunset Hills Mayor Pat Fribis proclaimed “Blockhead Day” in Sunset Hills and St. Louis Mayor Francis Slay proclaimed “Girl Scout Troop 1484 Day” in St. Louis in the girls’ honor.

But the president heard the story first, even trying out EcoGloo on the girls’ presentation board and telling them he would follow the progress of their inventions on their website.

“So originally your goal was to figure out how to break this (Styrofoam) down so you didn’t have this crummy stuff that sat in landfills forever, right?” Obama asked the team. “So how did you decide that you could break this down in a more environmentally friendly way?”

“It started at a retirement community in St. Louis called Friendship Village,” Reagan replied. “We asked them what their biggest problem was with trash, and they said that it was Styrofoam, so we did more research.”

Every month, Friendship Village throws out 20,000 Styrofoam cups, or 200 pounds of trash.

After residents of the senior community told the Blockheads about their problems disposing of Styrofoam, the team visited a landfill and confirmed that the common plastic foam is one of the biggest concerns of landfills, since it takes up so much space and takes 500 years to decompose.

Through research, the girls, who are coached by Christina’s mother Michelle Yepez, found out that Styrofoam can be dissolved by a non-toxic chemical made from orange peels, D-limonene. In tests, the girls dissolved an amount of Styrofoam the size of a refrigerator into two cups of a gooey substance, also non-toxic, which they realized could be used as a glue.

“Wow — so you were able to compress it that much? That’s pretty impressive,” Obama said. “How long did it take to break down?”

The Styrofoam dissolves in about 30 minutes, Julianna noted.

In a bonus, the girls discovered the gooey byproduct could also be put to use as an environmentally friendly glue.

“We gave it to our art teacher, who said that our glue is better than most leading brands,” Sydney said on Blockhead Day. “So we bottled it, and we call it EcoGloo.”

Testing out the EcoGloo on a business card he glued to the girls’ presentation board, Obama told them it was an “outstanding” invention that could help increase space in landfills across the country.

“You guys are going to do great things, keep it up. I’ll follow you guys on your website,” Obama told the girls after posing for a picture with the girls and their EcoGloo, although he let them keep the bottle of their product.

“I’ll be honest with you — the president rarely has to glue anything,” Obama said.

After hearing the story of the inventions and the meeting with the president, Fribis said she was excited that one of her first acts as mayor was to proclaim a day in the girls’ honor.

Despite the accolades the girls have received from all over, Yepez told the Call that her troop is a group of “ordinary girls that have done extraordinary things.”