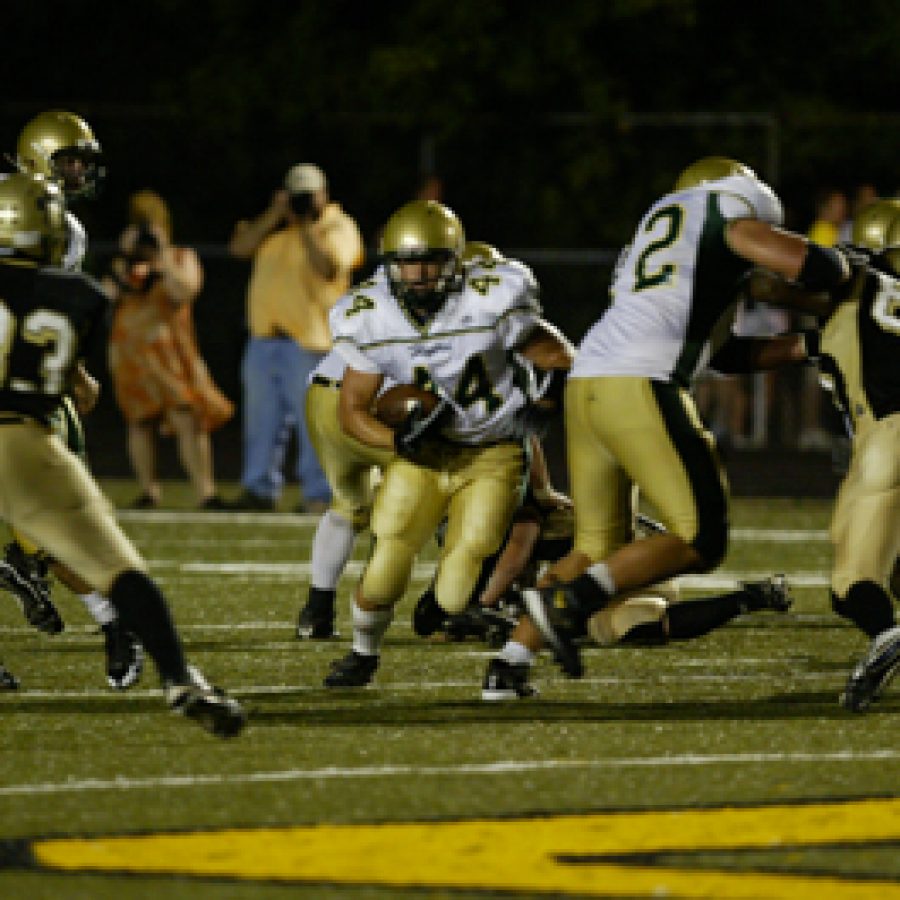 “The kids came in and played hard,” Lindbergh head coach Tom Beauchamp said. “But I really have to praise the offensive line because they were coming after (quarterback) Kyle Portell all night long.”

For Oakville, the loss marked another night of missed opportunities, according to head coach Arlee Conners.

“This was another game where opportunities were missed,” Conners said. “Lindbergh got the best of us in the first half. We got ourselves in the hole early and that was hard to get out of.”

Lindbergh scored early and often in the first quarter as Colton Doss had a three-yard touchdown run with 9:19 left.

The Flyers extended their lead to 10-0 on a 40-yard field goal by Eric Schwartz.

“I was out on the 23-yard line and I was deciding whether to go for it or not,” Beauchamp said. “He was filling in and I thought that he did a really good job for us.”

Lindbergh scored its second touchdown on a nine-yard pass from Kyle Portell to Sean Alexander with 5:11 left in the first quarter. Portell completed 13 of 21 passes for 211 yards and one touchdown.

“Not a bad night at all,” Beauchamp said. “Kyle’s starting to get into that groove where you start to see him make some good decisions out on the field.”

Alexander’s touchdown reception was one of three catches for 31 yards.

“Sean’s a first-year starter that’s got good hands,” Beauchamp said. “Every game he gets a little bit better.”

Oakville trimmed the Flyers’ lead to 17-7 when Steve Martin scored on a four-yard run with 6:28 left in the second quarter. He carried the ball 16 times for 62 yards and one touchdown.

“Steve ran real good,” Conners said. “We’ve just got to find a way to use him more.”

Portell extended Lindbergh’s lead to 23-7 on a one-yard touchdown with 3:12 left in the second quarter. Despite the touchdown run, he recorded a negative 8 yards rushing.

Portell’s second touchdown pass of the night was a four-yard throw to Mike Heumann with 0:31 left in the second quarter to give Lindbergh a 29-7 advantage. Heumann led the Flyers with six receptions for 103 yards against Oakville.

Oakville sliced Lindbergh’s lead to 29-14 on a three-yard touchdown run by quarterback Joe Plassmeyer with 3:09 remaining in the third quarter. Plassmeyer carried the ball 21 times for 51 yards. He also completed six of 13 passes for 140 yards and one interception.

Lindbergh finished the night with a three-yard touchdown run by Colton Doss with 3:31 left in the fourth quarter for the 36-14 final score.

The Flyers return to action at 7 p.m. Friday when they play host to Northwest (0-3, 0-2 Suburban West), which dropped a 27-21 decision to Mehlville Friday.