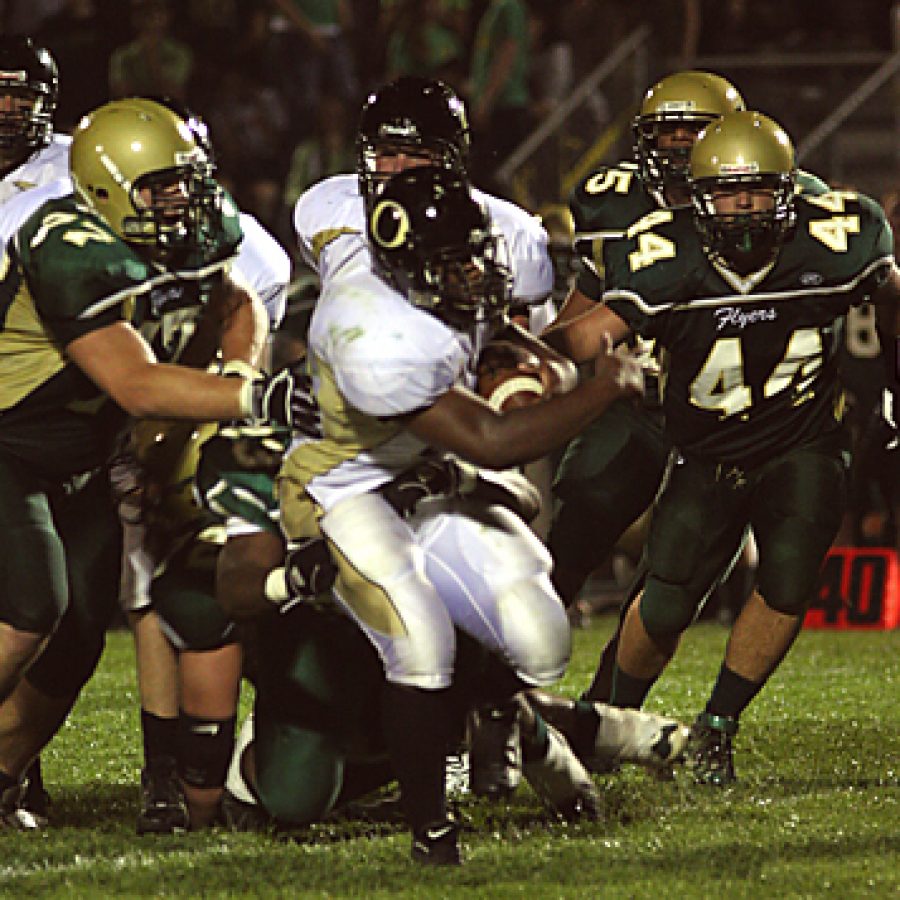 Oakville Senior High School running back Darnell Cooper, above, is taken down by Lindbergh defensive lineman Cedric Malone in the Flyers' 17-6 win over the Tigers Friday night. Stephen Glover photo

When the Lindbergh and Oakville high school football teams faced each other Friday night, the game featured two undefeated teams on a quest for a Suburban West Conference championship.

The Flyers’ running game assaulted the Tigers for 324 yards on 48 carries, which was one of the keys to the team’s win, according to Lindbergh head coach Tom Beau-champ.

“The kids played pretty well and I was proud of them,” Beauchamp said. “I think it (the running game) was one of those situations where you keep going to it when it’s working for you.”

Oakville’s loss was a wake-up call for the Tigers, according to head coach Arlee Conners.

“As a team, we need to settle down and get back to knowing what our assignments are,” Conners said. “I thought we had some opportunities early on and didn’t capitalize on those situations. We’ve made some mistakes, but we’re going to get better.”

Neither team scored during the first quarter, but Lindbergh’s Eric Schwartz pounded in a three-yard touchdown run with 9:33 left in the second quarter to give the Flyers a 7-0 after the point-after touchdown, or PAT, by Schwartz.

“Eric’s one of those guys that when you put the ball into his hands, he has a nose for the goal,” Beauchamp said. “I thought he really hit the lanes hard.”

Schwartz scored again on a two-yard run with 4:03 remaining in the first half to give Lindbergh a 14-0 lead.

The senior running back carried the ball seven times for 28 yards rushing.

The Flyers extended their lead to 17-0 with 36 seconds left in the third quarter when Schwartz hit a 23-yard field goal.

Schwartz finished the evening with all of Lindbergh’s points on the scoreboard.

Oakville finally got on the scoreboard with 8:23 left in the fourth quarter when Darrion Moore scored on a two-yard run to trim Lindbergh’s lead to 17-6. Moore carried the ball 17 times for 93 yards and one touchdown against the Flyers.

“Darrion had a productive night running the ball for us,” Conners said. “I thought he played well.”

Marquette is coming off a 44-7 loss at home to Parkway North Friday night when the Vikings rushed for more than 292 yards against the Mustangs.

“Marquette likes to spread you out with their offense and we were up 21-12 on them last year and ended up losing the game 27-21,” Conners said. “What we’ve got to do is put some pressure on their quarterback and try to contain him.”

The Flyers also return to action Friday when they travel to Northwest (1-2, 1-1 Suburban West) for a 7 p.m. meeting with the Lions.

Northwest is coming off an impressive 17-6 win over Mehlville Friday night when the Lions rushed for 155 yards and threw for 168 yards passing against the Panthers.

“Northwest is big and physical up front and I think they’ve also got a couple of good running backs,” Beauchamp said. “We definitely are going to have to come in with our ‘A’ game against them.”