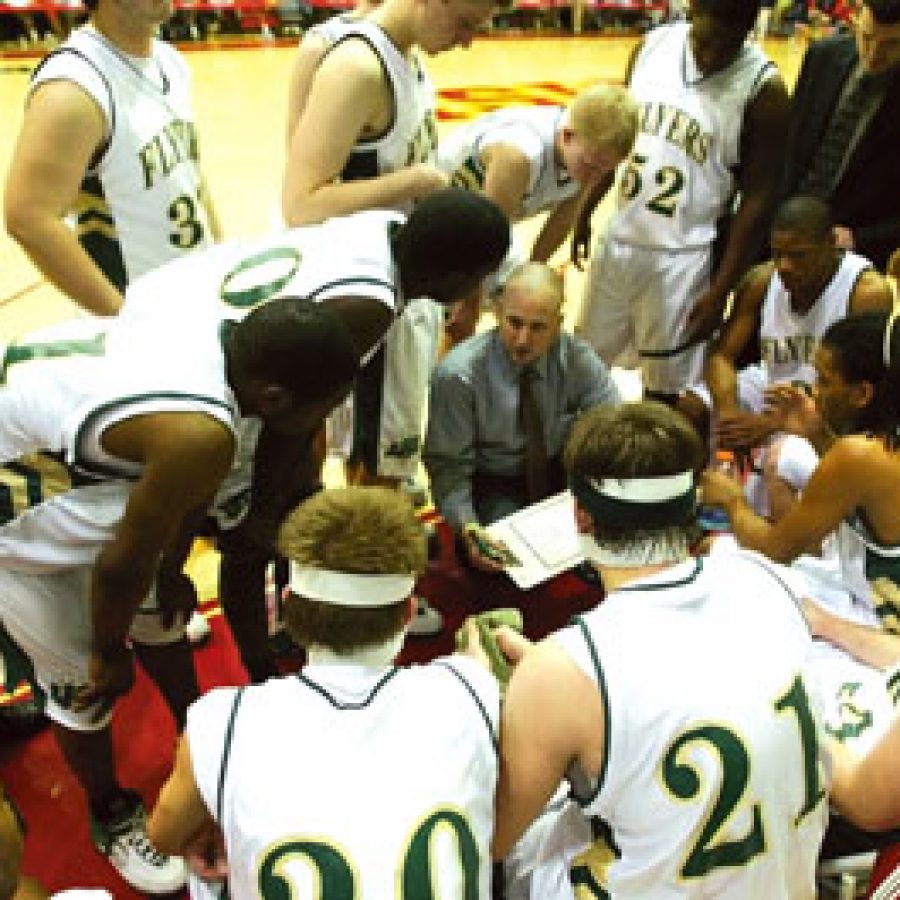 Lindbergh High School boys’ basketball coach Jason Wolfard was convinced at the start of the season that his team had the potential to win a district championship.

“When I took this job, our goal was to win more than a district championship,” Wolfard told the Call. “We started the year kind of up and down, and this just goes to show you that when a coaching staff and 15 players believe in a common goal, those goals can be accomplished.”

But the Flyers rode a roller coaster of ups and downs this season that included losing four of six games in December and then six of seven in January and February.

“Going through that stretch, it seemed like we couldn’t win a game,” Wolfard said. “The challenge to our coaching staff was to get this team motivated and back to winning games.”

Yet none of that mattered Saturday afternoon when the Flyers advanced to the Class 5 semifinals with a 62-51 win over Parkway South in the state quarterfinal at the University of Missouri-St. Louis.

“To start the second quarter, they actually went up 13 points on us,” Wolfard said. “I told our guys to relax and do what we’ve got to do in order to get on a run.”

Lindbergh bombarded the Patriots in the third quarter and took a 45-38 lead going into the fourth quarter.

“In the third and fourth quarters, our defense was just great,” Wolfard said.

“That was the best game that I’ve ever seen him play,” Wolfard said. “I think that the three three’s that he hit really shifted the momentum for us. You could really see the emotion in our guys’ faces.”

“Robert started off the game with his first shot being an air ball,” Wolfard said. “He then came out in the second quarter and hit two big three’s for us.”

Senior forward Tyler Kiel rounded out the trio of Flyers to score in double figures with a 14-point performance that included seven rebounds, three assists and one steal.

Up next for the Flyers is possibly their toughest game of the season as they take on McCluer North (24-3, 5-2 Suburban North) Friday afternoon. The Stars are coming off a 48-44 overtime win over Webster Groves Saturday evening.

“They’re athletic and they’re obviously very good,” Wolfard said. “Their quickness is something that scares me.”

“Of the four teams in the Final Four, we’re the ones that’s not expected to be there, so we have nothing to lose,” Wolfard said. “Right now, we believe that we can compete with anyone anywhere.”

Lindbergh’s Class 5 semifinal game is scheduled for a 4:30 p.m. start at Mizzou Arena in Columbia.